This rink is supposed to open on Saturday. There's some good ice on it already, but a style of flooding that may not work out well. The hose is poking out from under the closed garage door and just lying on the ice with a lot of spray coming out from the nozzle. It looks like it's making a hole where the pressure is greatest.

a new way of flooding a rink?

A caller tells us that when she phoned to find out the status of Irving Chapley Rink, she was told that the rain from the day before had done some damage to half of the rink, and that there would be extra staff on the evening shift to repair the damage with lots of hand-floods. The rain gets blamed for human error, maybe.

At five pm, there's one rink operator inside the building. The ice is thick and hard but bumpy and uneven in the place where the hose must have done its unmanned flooding yesterday. There are also some leaves frozen into the ice -- a common problem everywhere. The rink operator says he'll resurface the ice so that it ends up smooth. 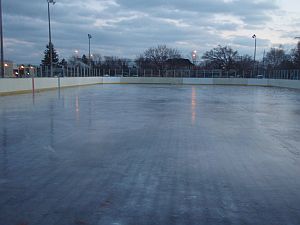 hard ice, but a bit bumpy in the middle 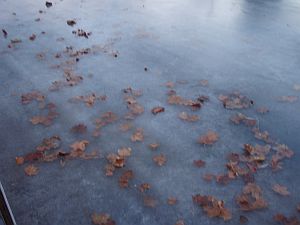