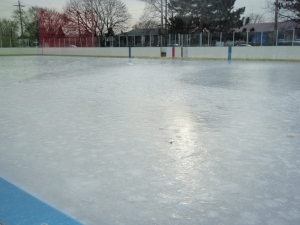 3 pm - bumps and shell ice -- not maintained
Click on picture to enlarge it.

At 3 pm the rink looked rough, with shell ice and bumps all over it, as well as leaves blowing around or frozen into the ice. The rink doors were open but there were no skaters. A staff person was in the building, sweeping out the daycare room. He said he's the zamboni operator.

When asked about the poor ice, compared to nearby rink that had excellent ice at the same moment, he said that he doesn't do the ice unless a permit is coming, "and permits don't even start until later." He said that the rink isn't really open, "we don't do that in North York," but that if someone got on the ice during the day he "won't call the police" or kick them out.

The zamboni operator was friendly and approachable but he had quite a few strongly-held opinions about how the rinks should be run (everybody has to pay)or whether there should be outdoor rinks at all (emphatically not).

When asked whether I could put up a cityrinks.ca poster on the bulletin board he said, "why not?" but he made it clear that he didn't want to know much about it. He also reiterated that he will not do ice maintenance except for a paid permit.

E-mail to City outdoor rink manager Kevin Bowser, from cityrinks.ca Yesterday at 3 pm on a rink visit to Irving Chapley Rink, this was the situation: [link to Dec.16 report].

I assume that a zamboni operator is assigned to an A.I.R. on a morning shift to maintain the ice, and the operator can't make an independent decision not to do so at all? (You may want to click on the ice photo enlargement).

Also it would be good if your A.I.R. staff actually support public outdoor ice rinks, but even if they don't, they need to be familiar with the current policy -- i.e. that the rinks should be accessible for free, unsupervised drop-in skating when not scheduled for either programs or permits. This operator seems to be unaware of that policy, even though (rink friends tell me) the Mayor emphasized it in a recent radio interview.

E-mail from City outdoor rinks manager Kevin Bowser, to cityrinks.ca I spoke to the Supervisor regarding this email. The staff you spoke to was filling in for one shift. Staff have be trained on the protocol that are at the facility on a regular basis.

"I think this arena is amazing and has such great potential for a major attraction in North York during the winter months. I've seen the ice in good condition over the years and its a blast playing there. However, I have not once this season seen this place maintained properly. The 14 ice maintenance shifts each week must be spent inside that newly built community centre, and not to mention how the phone rarely gets answered.... (they still have outdoor pool information on their answering machine) Its unacceptable. A few weeks ago the worker there refused to take the zamboni on the ice when I wanted to play with buddies cause he said it would ruin the surface."