Report from a 16-year-old skater: I got to Irving Chapley around 1 - 1:15pm and the rink was open so I went inside and asked a staff member if I could play shinny and he said no. So i looked onto the rink and I saw 2 people playing hockey so I asked him why i couldn't play if they were playing and he said that it was a permit and you've got to pay to play here. so I complained about how 2 people isn't a real permit so he let me go on and play but he told me "I didn't let you on and I didn't see you go on and if you break your neck I'm not going to do anything about it, it's your problem." At this rink unlike Glen Long they didn't make the hockey players wear helmets. When I was leaving around 1:45pm i tried to get back into the rink house and it was locked, the staff was gone and the gates were locked so i was caged into the rink with no way out, so i had to climb the fence to get out of the rink.

6.45 pm The rink lights were on, good ice, but no skaters were allowed on. Zamboni operator and a female (staff?) were sitting in the rink office -- the zamboni operator said, "ma'am, if you want to use this ice, you have to pay for a permit. People can't just come and skate when they feel like it."

7:45pm A CELOS researcher who calls the rink is told it's closed because the ice hasn't frozen yet. The Zamboni operator said once the ice is frozen he will start scraping it.

3:30-4:15pm On Sundays there is supervised public skating is from 2:30-4:30pm. When the CELOS researcher arrives at 3:30pm there are 25 people of all ages on the ice. The community centre is open. The changerooms are locked. There are benches in the lobby where people can put on their skates. A family of five is sitting on the benches speaking Russian. They are greeted in Russian by another skater. People leave their shoes under the benches. The floor of the lobby as well as the washrooms are rubber. There are rubber mats leading from the community centre to the rink.

At the entrance to the rink there is a sign listing the helmet rules for leisure skaters and shinny players. The helmet rule is enforced when there is a rink guard on duty but when the CELOS researcher visited the week before during an unsupervised period most of the shinny players weren't wearing them.

The rink guard who appears to be about 15 says he uses his discretion in enforcing the various rules. He says children under 6 must wear a helmet. The rink guard determines the age simply by asking. He asked one little boy on the ice his age. When the boy said 6, the rink guard let him skate without a helmet. (The boy was there with his older brother who was playing shinny during the previous CELOS visit.)

A week ago during unsupervised skating a little girl was using a walker to help her skate. This week the rink guard tells the girl's father that the walker is not allowed on the ice. (The CELOS researcher learns during a visit to another rink that walkers aren't allowed for liability reasons. They are considered a tripping hazard.)

Some of the skaters are playing with a puck. That is against the rules, but the rink guard chooses to ignore it.

There are 20 skaters on the ice. The rink guard as well as other skaters say 20-30 is a typical turnout for public pleasure skating but the rink guard adds that a week ago Sunday there were 55 skaters. He says this is an exceptionally high number.

One of the skaters says there are some permits at the rink but the rink is often empty. At those times it is used for unsupervised shinny. Also, shinny players sometimes play at night. One of the plastic glass panels is missing and the players climb through the opening. 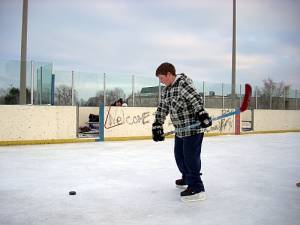 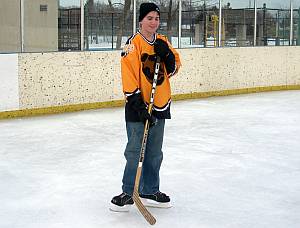 One of the regular shinny players. 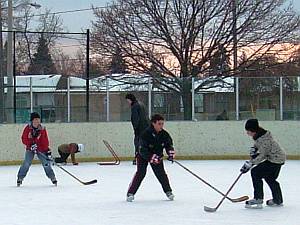 Father and daughter share the ice with shinny players.

3:15pm The building is locked because it's New Year's eve, but the gate to the rink is open and there are 7 people on the ice: 5 boys with hockey sticks and 2 pleasure skaters, a couple. The man says this is his first time at the rink and has no idea of what it's normally like during public skating hours. The rink is unsupervised because of the holiday. The ice is in good shape. (The rink has its own Zamboni, which is housed in a garage.) A sign at the rink lists the rules for unsupervised skating. More people arrive. Most are boys there to play shinny and they organize a fast-paced game involving 9 players including a female goalie with full equipment. (The boys helped her put it on. There are no nets on the ice, so the boys are using shoes as goal posts.) None of the boys involved in the game have helmets, but 2 other boys who are taking shots by themselves are wearing helmets with cages. The players' ages ranged from about 10-15-yrs old. Some parents with children also arrive. One father leaves with his daughter after the shinny players pretty much take over the ice with their game. Another father stays and continues to help his young daughter (maybe 5 yrs old) skate even though hockey players are whizzing around. The girl is using a walker to help her balance. The hockey players make an effort to avoid her but that's hard because they are playing very fast. Later at 4:30pm, 2 adult men come on the ice to shoot around the puck. A young boy is playing with them. The rink has outdoor lights but they weren't turned on at 4:45pm when the CELOS researcher left.

12:30pm A call is made to the rink to see if there will be public skating today at the usual Monday time of 3:30-4:30pm. The man on the phone says he is just about to close the building but people will be able to skate unsupervised. He says the building will stay closed on New Year's Day but the ice will be open for unsupervised skating. The rink building will open again on Wednesday.