According to the city's web page, this rink was CLOSED until after the Christmas holidays were done -- from the time the ice storm happened (from Dec.22 2013). But in fact the ice was open from Jan.4 (not the building). 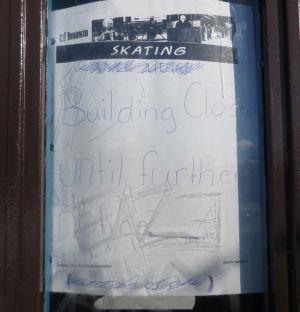 The only sign in the window: "Building closed until further notice"

Humber Valley Rink has been marked as "closed -- no water" on the city's website since Christmas Eve, although the ice storm took their power out in the early morning of Dec.22. The power to that neighbourhood was restored on Boxing Day. Today at noon there was a scrawled sign in the window, in faint ball point pen, stating the obvious, but with no information other than the obvious. Two cars pulled up, with skaters. But there wasn't even a sign for the nearest open rink.

What would it take to run up a sign on a park computer saying: "this building lost power on Dec.22 and has been winterized to prevent the water pipes from freezing. It will take between two and four days to bring the rink back into service after the power is restored. Call 311 for updates." 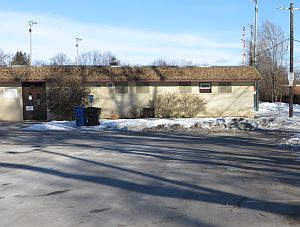 a crack in the locked chain link gate to the rink

"The unsupervised skating is not working. People play hockey and shoot pucks at all angles, endangering skaters. I have even seen hockey played during supervised skating by the supervisor! This rink is in very good shape. It is too bad there is no supervision for skaters, and that hockey players bully their way onto the ice.

This must change immediately."