Rink staff says they had an ammonia leak two days ago.

9:30 am: three workers there fixing a leak in the cooling pipes that had been discovered on Wednesday, when they'd tried to start up the cooling system. The worker I talked to estimated four hours to fix it, then they could start the chilling, and he thought by Monday morning it should open. There were no mats down other than one outside the fence, fence was locked and no signs anywhere that I could see.

12.30 pm: the rink is locked, and it's easy to see why -- the sunshine and the warmth seem to be melting the rink here. It looks as though people may have been skating yesterday -- hockey nets are just at the edge. Also there's a nice hand-lettered sign apologizing that the rink is closed, and giving a possible reopening time -- the only sign we've seen at any of the rinks that were supposed to open on Nov.19. 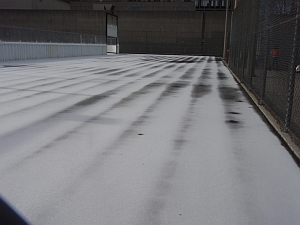 the pipes are not so good at this rink 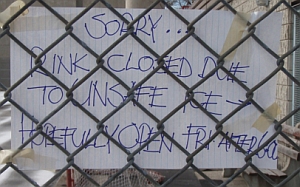 1pm. A good turnout of parents with their little ones, and quite a few teens. There was a lively shinny game going on on the shinny pad. There was one rink guard who kept moving between the bench at the side of the rink and the changing room. 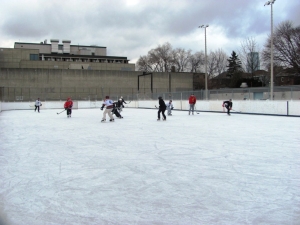 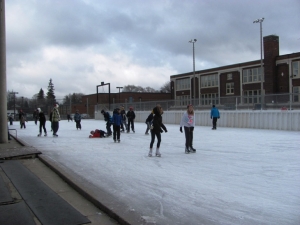 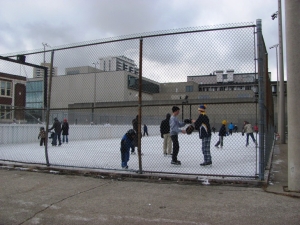 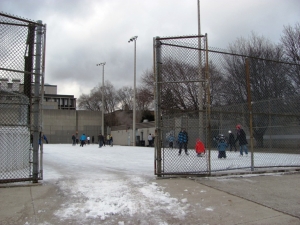 Rink user to cityrinks.ca: We're trying to figure out if we'll be able to skate xmas day. I went to the schedule but it isn't clear to me if it's just the buildings that will be closed at most the rinks or if the rinks themselves will be under lock and key.

We're hoping to go to Hodgson. Would appreciate any clarification.

Cityrinks.ca responded with a link to the city's holiday schedule, showing that Hodgson would have the rink open but the building locked.

From rink user Sally Bliss, e-mail to City Councillor Josh Matlow, cc'd to cityrinks.ca: 2.53 pm: I'm emailing you from my relatives' house in your ward, totally irate. Our family was looking forward to a Christmas day skate with the kids at Hodgson outdoor rink. We've just come back from the locked rink. The zamboni driver, (Mr. McCabe) refuses to unlock the gate. He says he has been turning people away all day. Parks and Rec website says as of 1pm that all outdoor rinks are operational. I went home and phoned 311, as did several other people who were being turned away. The staff member fielding the call was bewildered about why Hodgson should be closed. I went back to the rink and told Mr.McCabe what 311 told me. Another person called 311 on his cell phone and handed Mr. McCabe the phone. He McCabe walked away out of earshot, came back and said, 'well I just told them that my supervisor told me the rink has to be closed today." We phoned 311 back and they told us that the city website has been updated to say that Hodgson is closed due to thin ice. Mr. McCabe said that he just spent 2 hours maintaining the ice and that it's perfect. I left while a group of guys were threatening to hop the fence to play shinny. Mr McCabe told them he'd phone the police. There were people there from Edmonton, the Netherlands, Florida, all wanting to get on the ice. What a terrible Xmas day experience. What an embarrassment for Parks and Rec. My 2 and 4 year old are so disappointed.

From rink user Chris Marshall: At 4pm definitely gates were locked. we were very disappointed. Someone should be read the riot act for this. Went to North Toronto instead where it was open unsupervised but ice was poor for what is normally a very well maintained rink.

it sounds like something went very wrong at Hodgson today, for sure. Re the ice being bad at North Toronto -- no city rinks were being resurfaced on Christmas Day except for Nathan Phillips Square.

Cityrinks.ca is not a municipal website -- we're rink enthusiasts who want the rinks to function well. To make a complaint: call you councillor (Matlow) and e-mail 311 <[email protected]> That's the best way for your complaints to get logged along with the other people who called. 311 commits to responding to complaints within 48 hours. If they get back to you, and you feel like forwarding it, we'll add the response to the rink diary. If no one responds, we can send you a couple of other e-mail addresses.

From rink user Sally Bliss, 5.15 pm: Gave up on the skate. Begged 311 to get someone over there to unlock the rink. Phone operator said her hands were tied. Andrew walked over one more time to see the shinny players who had hopped the fence and someone else using a tool to cut through the fence. They told him to come back in an hour--which he did, but there wasn't much progress on the hole and the rink was empty, under lock and key.

Hope this gets some media attention.

At about noon we called Hodgson Rink and asked how the ice was. "Great." We asked if it was thin, and the rink attendant said no, it was fine. About why it was closed yesterday, he said, "Because it was a holiday."

I will be working with the outdoor rinks manager to resolve this issue and to ensure it does not re-occur for the remaining rinks season.