2pm: Hodgson was locked down. There was no ice on the pad and no flooding. Some things had changed since yesterday, however, such as the location of the hockey nets. The nets were now lying in front of the rink house. The mats on the west side of the rink were still in disarray. 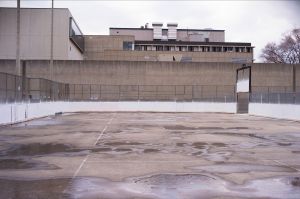 no ice being made 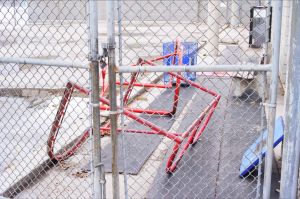 I was just wondering if you know who I can contact about the times for women's shinny at Hodgson. I went today at 6:30pm and the lights were off and it was locked up. Both your website and the City of Toronto website says that on Sundays they have women's shinny from 6:30-8pm. I called 311 before I went and they told me the rink was open and women's shinny was at 6:30. I'm just not sure who else to contact to get info on the right times.

Any ideas who can figure out what's not working here? T.F., that must have been frustrating. I've cc'd Deirdre Norman here too, since she has a big interest in women's shinny citywide.

I do know we had mechanical problems with this rink and were not able to open as planned on November 27th. Perhaps there was another mechanical break down - don't know but we'll find out and report back. Thanks for letting us know about your experience.... ....apparently [a staff member] responded this morning to advise that the Zamboni had mechanical problems.

Both rinks pads were full of people, and many more were putting on or taking off skates on the benches outside. Lots of families -mostly fathers, sons, brothers and friends were playing on the crowded shinny side, and more families skating together on the pleasure side. One little boy said to his mother that the rink was so bumpy and his mom told him that there was no maintenance that day, and to be careful of the gouges in the ice. No one looked unduly concered, although some patrons said they wished the skate changing room was open.

The holiday schedule was prominently posted outside the building. The regular skating information advised people that everyone - regardless of age or skill level - needed to wear a helmet - something that the city staff policy does not require. 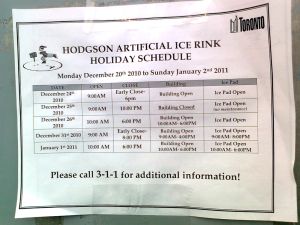 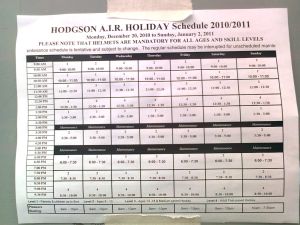 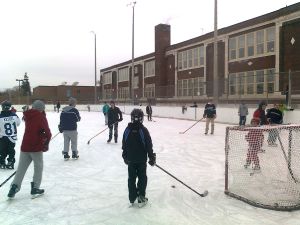 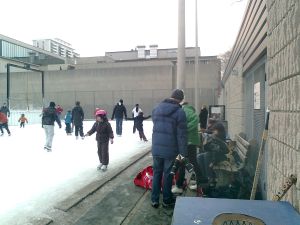 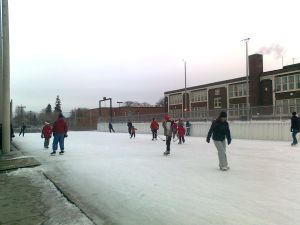 I get asked a lot of questions about shinny times and when I was at Hodgson the staff and the skating instructor were a little unclear about the schedule. I think there has been some confusion about the end time because players thought it went until 9:30 pm and ice maintenance was happening at 9:00 or 9:15 and then the rink was closing.

So my question is, what time does Hodgson close on Sunday? Is it 9:00 pm? Or is that the end of the program and open shinny goes for another hour?

Adult Beginner Shinny is definitely until 9:30pm on Sundays. Ice maintenance should not happen until after 9:30.

Thanks for that information. As I mentioned the maintenance has been happening at 9:00 or 9:15 and while that isn't a lot of time, every minute counts when it is our outdoor ice!

I agree with you. I'll ensure it doesn't happen again.