The rink was locked with no one else there except for one staff on site just putting away the big hose. He said that was it for the day, and when asked if anyone was going to flood at night he suggested calling 311 to find out. He said he hoped it would open sometime next week. The ice looked solid underneath with water on top - maybe an inch thick or so, though we couldn't walk on it so it was hard to tell. 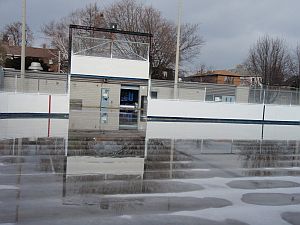 too much water to skate

The rink had lots of water on it. The ice maintenance staff person said that the rink was unskateable because of Mother Nature. He also said that the previous evening it had taken 3 hours for the water to get solid. He was surprised to hear that three other rinks were fine.

Since he was on site in the daytime, it seems possible that he actually tried to flood the rink in the morning -- not a good idea given the sun and the warmer weather. 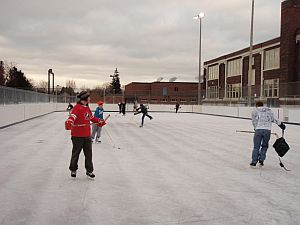 All week the 311 line has been saying that Hodgson might be open. Or, they said, it might not be open - no one has updated them. On Saturday, a call to 311 again sounded uncertain. The 311 operator gave us the Hodgson Rink phone number on her list, but that turned out to be for the Maurice Cody Community Centre. The person who answered said that Hodgson wasn't open because the weather was too warm. A request for the direct rink phone number was declined: "I don't have the number, and even if I did, I wouldn't give it to you because we're not supposed to give out the rink phone numbers."

However the correct number was on the cityrinks list. A call to Hodgson was answered, and the staff person said it was open as of that morning, and the ice was good, and quite surprisingly thick. A visit at 3 pm showed good ice, with four people on the pleasure-skating side and about 9 young guys on the hockey side. A man who came out of the staff office did not answer any questions, just went in the office and came back with a schedule, then walked down the road away from the rink.

The bathroom cleanliness was dicey, but the mood on the rink was good. As I rode away, two youth were hurrying up the path, looking pleased and excited -- and surprised. No wonder -- how could they have known the rink was open, when the information sources were wrong and there was no publicity?

From S.B.: I was at Hodgson yesterday. I met an 8 year-old boy on the pleasure skating pad. He was disappointed not to be playing shinny on the other pad. It was during shinny hours for his age group but was dominated by teenage boys and men. There were a handful of younger boys. His mother didn't feel comfortable letting him play.

We both asked the rink guard if he would enforce the age requirement and he said that he couldn't do it. He said that there's no way he could allow just a few people to have an entire ice pad to themselves, that he had been working for 8 years and had never heard of any staff doing such a thing. I told him that at other locations, rink guards routinely ask men to leave the ice when it's the women's shinny slot, even when there are just a few women. He didn't believe me and said that it must be during a permit. I tried to explain why it's problematic to allow older boys and men to play during the younger kids' time slot and that it would become a de facto time slot for the older players.

(This is what was happening on the weekends with women's shinny last year at Riverdale until a few of us insisted that women's shinny is for women. Every week a couple of men would come--and ask to play, then a few more would arrive and a few more, until it was dominated by men and too difficult to ask them to leave.)

would you be able to find out if the Hodgson rink staff have now been directed to follow the schedule and enforce the little kids' shinny time?

e-mail from CityRinks to Recreation supervisor Tino DeCastro: yes the age groups are being enforced. 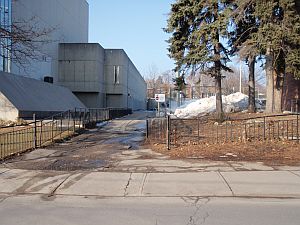 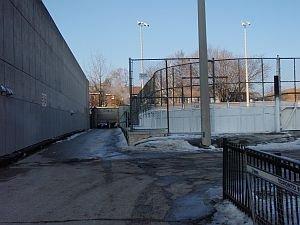 still no signage as you get closer

This rink seems to be completely without signage, and yet lots of people know about it. It wouldn't be easy for a newcomer to know, though. For those people who come, there should be more benches, and a coat of paint would make it seem like somebody cares about the rink. 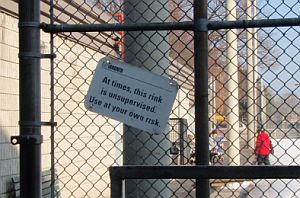 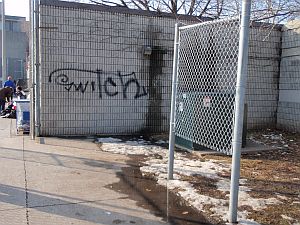 this used to be a bulletin board 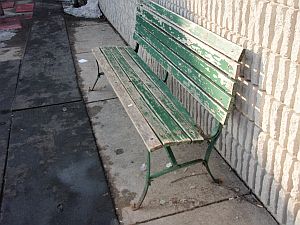 one of only three rink-side benches 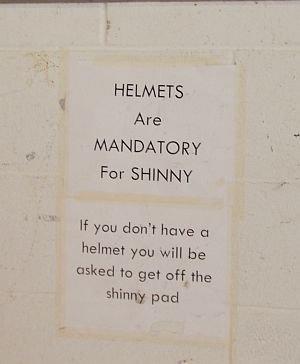 Number sample: At 2.20 pm there were 24 shinny players (12 and under time, 13 with helmets). This was despite signs all over the change room saying that anyone on the shinny ice without a helmet would be asked to leave. There were 9 pleasure skaters, and 6 more sitting on the south-facing benches, plus 5 inside.

Hodgson is a very popular rink, but without signage and a more sociable space, it isn't as much of a neighbourhood resource as it could be. 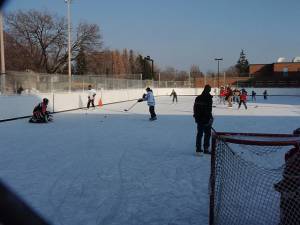 a lively game, with and without helmets 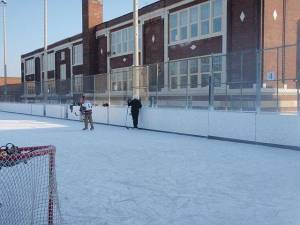 ice high on the dasher boards

The staff office at Hodgson had three people in it (no windows!) I asked if I could put up the ombudsman poster, and a very nice young rink guard in the office said she couldn't allow that without checking with her supervisor. I left the poster with her, and she said she'd tape it up as soon as she could get permission. But it never went up.