At 2 pm the rink was just about to close -- the ice was mostly slush but there were skaters on it anyway -- just to savour the last few hours, people said.

The long-term, much-respected zamboni operator has had his position "deleted." The "deletion" is another piece of fallout from the current Parks, Forestry and Recreation organizational restructuring. None of the long-time rink workers were consulted about the outdoor rink restructuring scheme. The zamboni operator says that twenty-two years of his experience have been deleted. He and the other "deletions" were invited to attend a Human Resources seminar on how to write a good resume. None of them had ever had a chance to ask any questions about the new concept of running the rinks, so they kept on interrupting the lesson to ask about the plan. Finally the Human Resources instructor shut his notebook with a bang and said he was fed up with the questions, "you people don't even know how to value yourselves."

The zamboni operator said he and his colleagues had to restrain themselves from throttling the instructor. After all, the new rink fiasco wasn't his fault. But whose idea was it? Who was consulted? Where does the buck stop? The main question remains: Is anyone home? 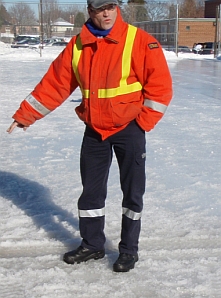 zamboni operator points out the slush 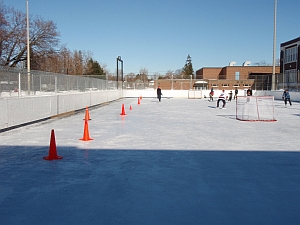 hockey down the middle

5 pm: the pleasure-skating pad is unskateable, with two chairs set out and a sign suggesting that skaters could come back in the evening. The hockey pad has the nets pulled forward and pylons along the south-facing ice, but a good game of parent-child shinny hockey with 12 players. The zamboni operator says there were 30 people playing shinny a short time before, but they left when the ice got slushy. He says the skaters know to come out in the mornings and evenings when the sun shines in late winter, especially in March.

He points out the school and an office building just to the west, both of which give a bit of extra shade to the hockey rink so it's able to stay open when the pleasure-skating rink is toast.

4pm When CELOS arrives there are 11 people on the hockey pad. Nine are adults who aren't wearing helmets. Most of the ice surface looks good, but there are pylons along the edge of the boards on the north side of the rink. They weren't there when CELOS visited the rink two hours earlier. Shortly after CELOS arrives, the players leave the hockey pad so that the Zamboni can clean the ice.

There are 5 people (parents and children) skating on the pleasure pad. About a third of the pad is too slushy for skating and there are pylons to keep people off. Although there aren't many people skating, there are another 20 sitting on the benches by side of the rink and 15 more in the dressing room.

Fifteen minutes after the CELOS researcher arrives, he is confronted by an adult rink guard who asks if the researcher has any children at the rink. When the researcher says no, the guard says "This is a public rink. It is owned by the City. You don't have the right to take pictures of other peoples' children and you don't have the right to take notes about other peoples' children. People have been complaining." The researcher explains that he works for CELOS and has come to Hodgson to study rink conditions for City Rinks Toronto. He says the pictures are not specifically of children but of the crowd at the rink. He says the point of the pictures is to give people who've never been to Hodgson a sense of what skating at this rink is like. He says he's sorry if his picture-taking has made people uncomfortable. He offers to show the rink guard his notes, but the guard says that isn't necessary. The guard seems satisfied by the researcher's explanation but adds he can't let the researcher keep the pictures. However, the guard doesn't stop the researcher from leaving with the digital camera that has the rink pictures.

1:20pm There are five people playing shinny on the hockey pad. Two are women. No one is wearing a helmet. The ice looks good.

There are another five teenagers on the pleasure pad. There's also a child wearing a helmet with a cage mask. The ice looks soft along the sides, but most of the surface is skateable.