At mid-day the rink was closed, because of thin ice. This was the result of an electrical problem that had prevented staff from flooding the ice for two days last week.

At 5.30 the rinks was open and there were a few hockey players on it, but then it closed again at 6. 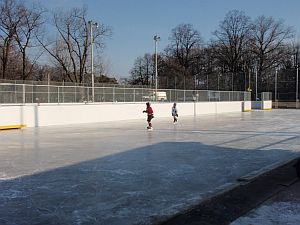 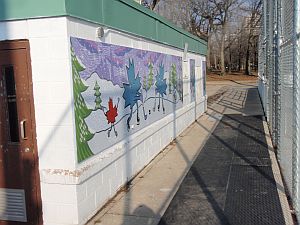 The rink was open with a few skaters. A very friendly zamboni driver said that although the zamboni still has a tent this year, there will be lots of new construction next year, which will include a proper garage. However, he said, the tent works well when they have a heater in it (there are bales of straw to help with insulation). The heater hadn't arrived yet from the rental place, but he was hopeful that it would be soon.

At 11 a.m. the rink was open but only for pleasure-skating. There were 12 pleasure skaters. The changerooms were unlocked but there were no rink guards. Just the zamboni driver in the office -- busy on the phone, so I couldn't talk to him.

The women's washroom was out of order. The disabled washroom (a sign offered it as the alternative) had a horribly dirty toilet seat that looked like it had not been cleaned for quite a while, but was otherwise very tidy. 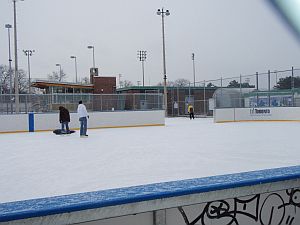 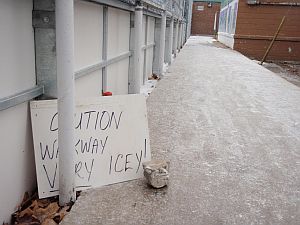 the condenser vapour comes out right beside the path 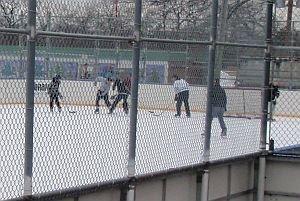 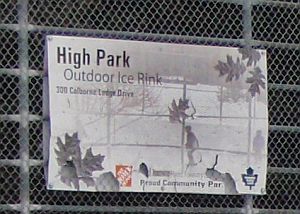 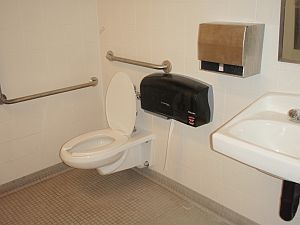 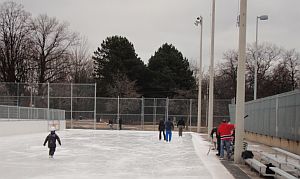 There were 4 staff there, all in the office, and the changerooms were locked. One of the zamboni operators was very friendly and let me and some other skaters in to use the washroom. He explained that they were only working until 5:30pm. He said the rink lights would be on until 10pm.