Winter is in the air and the skating season is upon us, so I got to reading your report cards for rinks. It reminded me of an issue at the High Park rink from last year, and it occurred to me that you might be good folks to mention it to. They had set up, for a good part of the season, skate mats that went down the hall and into only the men's changeroom - none into the women's room at all - not to get there, and none in the room itself. The men's room, on the other hand, was covered completely with mats. Not cool. And very unwelcoming to female skaters.

I know that several women took to moving the mats each time they came, so perhaps this will be remedied this year. Here's hoping...

Copy of Sarah Hayday's e-mail, plus comment: Fyi -- if this situation was because the skate change area is meant to be unisex, sounds like some better signage is needed, maybe? And still, there would need to be mats to the women's washroom. Sounds like there is a bit of a shortage of mats, citywide.

Thank you for your e-mail. I am on vacation and will be back on Monday, December 1st, 2008.

Nov.19 2008 From cityrinks.ca to Paul Ronan, Director of Parks

From Director of Parks Paul Ronan to cityrinks.ca, cc Helen Sousa Certainly. I will forward to helen Sousa who Kevin has clearly identified as the contact during this time. Take care

Nov.20 2008 From cityrinks.ca to Director of Parks Paul Ronan

Sorry, my mistake. Ms.Sousa, the rink user has asked that we post her letter and I'd like to post the solution as well -- good news is always welcome -- could you keep me posted?

Helen should be in touch with you if she has not been already. I spoke to her personally about this.

You are correct in assuming that the intention was to only have one unisex changing room for the purpose of changing into your skates and this is the reason why only one room is fully matted. I would agree with you that better signage to indicate this could be provided. We will work on this for the upcoming season. We will also provide matting leading to the women's washroom.

Thank you for bringing this to our attention.

Message on city rinks 'hot-line' The message says "The City of Toronto has partnered with the Toronto Maple Leafs and the Home Depot to improve the High Park outdoor ice rink. As a result of the revitalization efforts currently being undertaken, the rink [will not reopen until] mid-to-late December providing construction is not seriously affected by adverse weather conditions."

Besides that, about a week ago CIMCO discovered a leak in the header trench, so two technicians were there repairing the pipes. The pipes look rusty, the compressor room is old, the condenser looks pretty rough, and there's no zamboni garage. Oh dear. 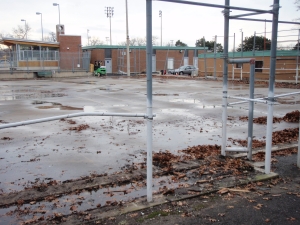 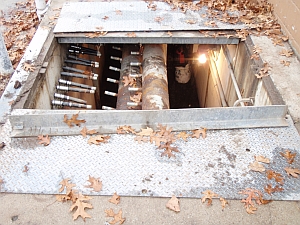 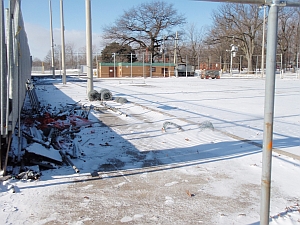 no boards, no ice

The rink boards have not yet arrived, so there is nothing happening and no ice.

The rink boards are up and the compressors were turned on at 2 pm. Usually the compressors are run for 24 hours to let the cement slab cool down, but there's no time -- the aim is to open the rink on Saturday. So an all-night crew (2 people) has begun to hose the ice and at 8 pm the first layer was starting to set. One of the workers said there was lots of construction mess for them to clean up when they started their shift. 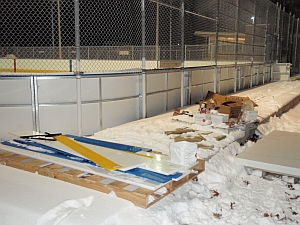 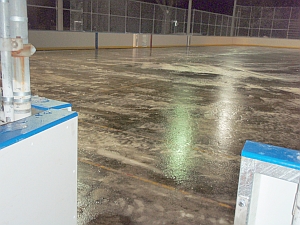 tent is ready for zamboni

The zamboni tent had arrived, but no zamboni yet. A technician from CIMCO was there to make sure everything was good with the compressors. he said the new boards are aluminum, which needs less maintenance but if it gets dinged by a machine during resurfacing, it's harder to fix than plywood.

According to a woman named Tanya, who works for the Leafs-Home Depot hockey legacy program said that they didn't get the okay to fund the new boards until September, and then it had to go through the channels at the city. So the final okay was only six weeks before rink season began, and that's why High Park Rink couldn't open on time. She said that her organization wanted to "give back," hence all the plans for refurbishing rinks.

Some more snow fell overnight and there were flurries this morning. At High Park at 1 pm, the pleasure-skating ice was open and a zamboni was on the hockey side. There were 15 people skating.

The city holiday schedule says that High Park rink is open but without supervision. In actual fact, there are two staff there -- a zamboni driver and his assistant. They are sitting in the observation office. Because of the holiday, there are no program staff or rink guards where the actual skaters are. But there are plenty of skaters, both on the shinny hockey pad and on the pleasure-skating side, many looking like they're having a very good time. 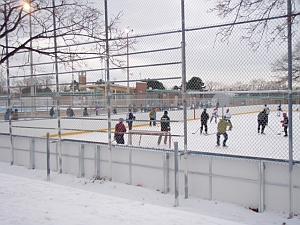 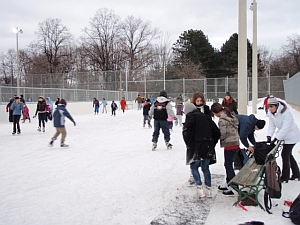 The change area is not well signed but it has many new rubber mats leading both to the men's and to the women's swimming pool changerooms. Newly arriving skaters are hesitant about whether they're supposed to go to their assigned gender areas, but they soon figure out that the signs are not meant for winter. 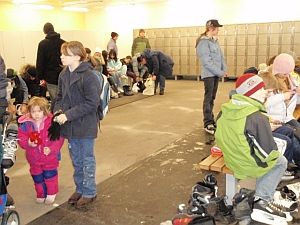 the change rooms now have plenty of rubber skate mats 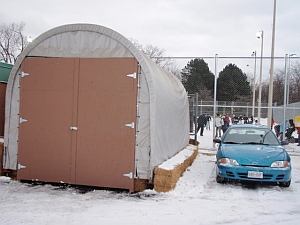 The zamboni tent has straw bales at the bottom, to keep the zamboni warmer. It looks a bit like a little barn where goats might be kept -- snug. 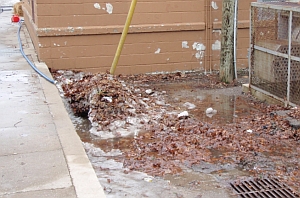 hose for getting the water out 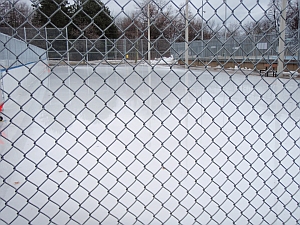 the rink is melted, compressors shut off

Big trouble. The compressor plant sits below grade, and with all the rain in the previous day, water collected and ran down toward the compressor building and flooded it. CIMCO and Parks staff were there setting up more pumps -- the header trench had a huge amount of water in it too. The tech guy said that the building started to have water in it yesterday, then he started a sump pump and it went down. Later the water began to rise again, so he went out and bought another sump pump, set it up, and again the water went down. But in late evening, he said, as the rain got harder, suddenly there was like a river of water coming toward the compressor building. He put on high boots and turned off the compressors, and watched as the water flowed right down the stairwell. 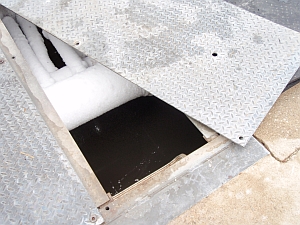 header trench has high water in it 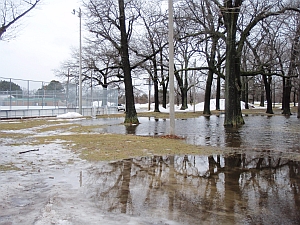 a temporary lake nearby

"How long until the building and the header trench can be drained and the rink can start up again?" -- "No idea." But they're used to this: "It's happened about eighteen times before!"

There are new lakes all over the place. The problem is, the ground is frozen and can't absorb the rain and the meltwater from yesterday. On the news: part of the subway has had to shut down because there's water in the tunnels by Union Station.

Who can stop water? You can't.