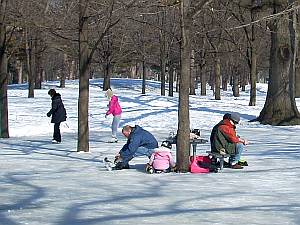 Skating on natural ice at High Park
Click on picture to enlarge it.

11:30am There is an unusual sight at the park today. Twelve people are skating on a natural ice surface that has appeared next to the artificial rink. The natural ice is so smooth that it looks like someone has flooded the area on purpose. However, conversations with skaters reveal that the ice appeared naturally. About a week ago, a lot of snow melted leaving a big pool of water that later froze over. As one father put it, "Mother Nature did this." This accidental rink is quite beautiful because the ice has formed around trees and a picnic table.

At the real rink, there are 14 people skating on the pleasure side while 6 more people sit or stand on the side. Some are parents with children. Most of the children are wearing helmets. A couple of the children are using walkers. A few also have face masks. The changeroom is open and there are a few more people there. (One of the washroom hand-dryers isn't working and there's no soap in the dispenser. The washroom is, however, clean.) When CELOS arrives, the hockey pad is unlocked but empty. Later a family goes there to skate and shoot hockey pucks.

There is a handwritten sign on the big staff room: STAFF ONLY. KNOCK BEFORE ENTERING

Empty and locked at 10.45, all lights still on --sad. There are no houses anywhere nearby and this rink could stay open.

The HIGH PARK hockey rink internet site indicated one permit 12-1:30. Throughout the day I went to play hockey and was told a new permit was issued and the rink was booked. This went on to 5:30. I was told that a permit can be issued at anytime. Except for 9am-10am on Saturdays, there is apparently no time reserved for hockey that is open to the public - and I understand even that time slot can be booked.

The public has no knowledge of when they can or can't play hockey on a Saturday, and based on my experience, should assume they can't.

Why is a hockey rink designed for public use unavailable on Saturday and Sundays to the tax-paying public?! BK 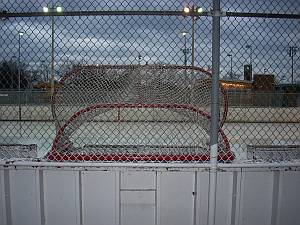 The rink was closed

5pm The rink is locked and empty because of the warm weather. The rink operator says that if the temperature keeps dropping, the rink might open at 8pm, but he's not sure. Steam is coming from the evaporator and the compressor is running. The operator says compressors shut off automatically when the temperature rises above a certain point. He thinks it's 15% Celsius. The operator works at several rinks in the West and is at High Park once a week. When the CELOS researcher mentions there was a hockey game the night before at Rennie rink, the operator suggests that might be because the players had a permit.

Asked about the helmet policy for shinny players at High Park, the operator says the rule is enforced but some players resist. The operator says he doesn't have the authority to force players off the ice, which makes it hard for him to enforce the rule during those periods when he is there alone. Rink guards, however, can make players leave the ice. Older players and teenagers are the ones most likely to object to wearing a helmet. Generally speaking, shinny players obey the rink guards, but some players do challenge city employees who don't have the same authority. There have been times when one player will come on the ice without a helmet while everyone else is wearing one. The other players seeing this, will then take off their helmets. The rink guards then have to remind the players of the helmet rule. Also, players will sometimes say they don't have a helmet, when the guards know they have just put their helmet on the bench. 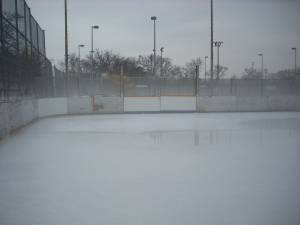 The hockey pad is locked 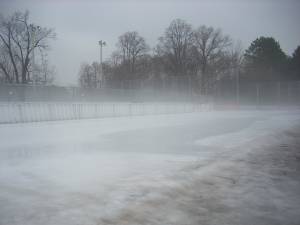 1pm Low 10, high 15 celsius. The gate to the hockey pad is locked, No one is on the leisure pad either, There is water on both bads and the warm air makes mist over the ice. Two maintenance workers are there. They have moved the hockey nets off the ice to stop them from sinking through to the ground. They say the warm weather has made the ice "toast" and there is nothing they can do to make the ice good enough for skating. They say the rink probably won't open again until Thursday. The workers came to High Park from Rennie rink where they spent several hours working on the ice. They will be at Giovanni Caboto next, but say they probably won't be able to do much there either, They mention that there was a serious graffiti incident recently at Rennie. 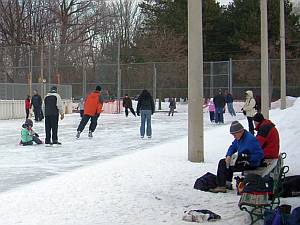 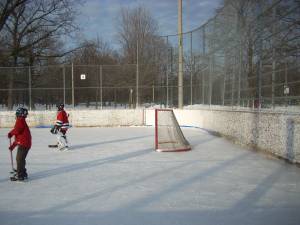 2:30-3pm The changerooms are open. There are 30 skaters on the leisure pad. There about twenty young boys playing shinny. The ice is in good condition. The boys on the shinny side are wearing helmets. 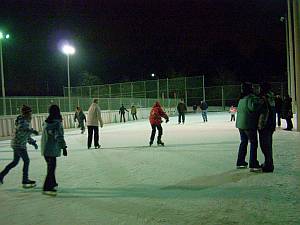 There were more than 30 skaters

5:50pm The rink is open. The lights are turned on and the rink changerooms are open. There are 3 players on the hockey side. They are shooting pucks at the net. 2 of the players are wearing helmets. One is not. There are more than 30 skaters on the pleasure pad. The scene is lively. There is a lot of laughter on the ice. About 10 of the skaters are children. Some are wearing helmets; some are not. There are a couple of teenagers but they are there with their parents. There are also a few couples and some adults skating by themselves. At 6, the Zamboni driver asks the hockey players to clear the ice so that he can scrape it. At 6:15 he asks people to clear the pleasure pad for the same reason. He tells the skaters that after he is finished scraping, he will be closing the changerooms for the night. However, the lights will be left on and people will still be able to skate unsupervised. About half the people go to the rinkhouse to get their things while the other half troop over to the hockey side to skate. The ice on the hockey side is much rougher than the ice on the pleasure pad. The rubber mats leading to the hockey pad are covered in ice. Also, there is rough ice between the benches and skating surface on the pleasure side. There is a rubber mat from the benches to the ice, but most skaters are forced to make their way over the rough ice. When the CELOS researcher leaves at 6:30, more people are arriving to skate and play hockey. 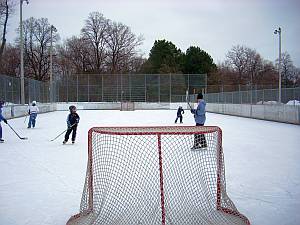 11am The changeroom is locked, but the rink gate is open. No one is skating but a man and a woman are changing into skates on the benches at the side of the pleasure rink. During the next hour more people arrive. For most of the hour there are 8-10 people on the pleasure rink. By noon there are five shinny players on the hockey pad. At noon more skaters are arriving. A group of two men and two women are chatting in Russian. Another woman is speaking to her son in that language as well.

The ice on the leisure pad is a bit soft and there is snow at the corners. However, the ice is good enough for a pleasant skate. The ice on the hockey pad is harder and smoother. Between the benches and the rink surface there is a lot of rough ice where snow has melted. This makes getting on and off the ice tricky. People who changed their skates on the benches had trouble making their way to the ice surface.

One of the skaters is a man in his sixties who grew up in the High Park area. He has just returned to the area from Vancouver where he had been living. He says he skates at High Park every day and the rink is never very busy. He also says that about a week ago the ice had turned to mush.

He recalled that when he was a boy in the late fifties and early sixties, it was common for hundreds of people to be skating at High Park. He says High Park rink used to have a lively social scene. Boys and girls would come here to meet each other. He also says the rink used to be open on Christmas. Children would get skates or hockey equipment for presents which they would try out at High Park.

4:20pm High 0 celsius, low -4. There are 12 shinny players on the hockey pad. They are in the middle of a fast-paced game. Seven players are wearing helmets, five are not. There is a sign at the gate listing the rink rules. At the bottom of the sign, there is a small notice saying shinny players must wear helmets. When asked, the Zamboni driver says helmets are mandatory. More players arrive. There are now 15 players on the ice. Most are adults; a few are adolescents.

There are a dozen skaters on the pleasure side, mostly parents with children. Skaters are still arriving. One of the skaters says the ice is "a little choppy" but otherwise good.

No staff other than the Zamboni driver are visible. He is the one who answered the phone when a CELOS researcher called at 4 to ask if the rink was open. The Zamboni driver says he will be cleaning the ice at 5:30pm. When he is finished the changing room doors will be locked. The gates will be open and people will still be able to use the ice, but there won't be any lights.

In the corridor that leads from the changeroom to the ice there is a sign telling skaters to walk on the rubber mats. Someone scratched his own message into the sign: "Put the mats where the skaters go." There are portable mats in the washrooms.