You are on the [Pleasureskatinghelmets] page of folder [Helmets]

Helmets for kids and Pleasure Skating

On a wintry day soon after Christmas, a mother decided to take her small children out to one of the citys skating trails. She bundled the kids into their snow suits, packed a snack and the new skates and the helmets and a change of clothes in case of a fall into wet snow, and  because one of the kids was just learning to skate  a portable plastic skate-aid. Then the family got on a bus with all their stuff, trying not to lose their balance when the bus drove off before everyone was sitting down. At the other end of the ride, they got off and walked 20 minutes to the rink. They got their skates on, skate aid reassembled, helmets adjusted, and went out onto the ice. 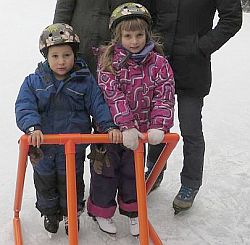 Two minutes later, a rink guard skated up to them and told them to get off the ice right away. The bike helmets the kids were wearing are not allowed, the guard said. All children under six must wear a hockey helmet certified by the Canadian Standards Association (CSA)  no other certification will do. The mother said, but were not playing hockey! No matter, said the rink guard. The helmet is to protect the kids against banging their heads if they have a fall on the ice, and bike helmets wont do that.

The mother had done her research before she bought her kids their helmets. She showed the rink guard the certification sticker inside the helmet, from the American governments Consumer Products Safety Commission (CPSC). At this point the rink staff summoned her supervisor to help her deal with the mothers resistance. The mother explained to the two rink staff that the CPSC certification means the helmet has been tested to withstand falls from seven feet high and a collision with a solid barrier (like a tree) while moving at 14 miles per hour. The kids were neither of them more than four feet high and they skated at speeds way below 14 miles an hour, on their new skates. As the kids watch anxiously, the mother asked, Dont you see that my kids are just fine with these helmets? It took us so long to get here, and my kids were so excited to come  please dont keep us from skating.

But the staff were firm. No rational argument could prevail against the citys rule: only CSA-certified hockey helmets would do. So the mother took off all the skates, packed everything up, and took everyone back home after a memorably painful experience. She shared the story with her friends, and some of them decided that the extra expense of buying another set of helmets was not worth it, especially when there was no logic to it. Barring an unmonitored frozen pond nearby, skating would not become a family activity while their kids were young.

This same scene plays out in the same way every season at all Toronto rinks. Chalk up another point for the bubble-wrap movement, another loss for outdoor play.

Not a good approach!

So we made some calls to other cities across Canada. That turned up the information that Toronto and Halifax are the only cities that require helmets to be worn for pleasure-skating at municipal outdoor rinks. (Halifax has only one outdoor rink.) In Calgary, Edmonton, Regina, Winnipeg, Ottawa, Montreal, and Fredericton, helmets are recommended for pleasure-skating at outdoor rinks  which means that if kids are wearing a bike helmet, or a snowboard helmet, or the hood of their snowsuit, theyre not turned away.

But in Toronto (with one important exception) children under six are required to wear a hockey helmet approved by the Canadian Standards Association (CSA)  no U.S. or European helmet certification accepted. The exception: Harbourfront's Natrel Rink, not run by the City, has no helmet requirement for pleasure-skaters of any age.

The head of a helmet advocacy institute in Washington DC sent us links to a page from the U.S. Federal Governments Consumer Product Safety Commission (CPSC) website. Theyve posted a table that lists the different kinds of helmets and what theyre designed for. Hockey helmets are designated as Team sport helmets...designed to protect against multiple head impacts typically occurring in the sport (e.g., ball, puck, or stick impacts; player contact; etc.), and, generally, can continue to be used after such impacts. There is no certified pleasure-skating helmet category in either Canada or the U.S., so the CPSC recommends certified bike helmets for pleasure-skating.

In other words, requiring hockey helmets for pleasure-skating only makes sense where the little pleasure-skaters will be sharing the ice with hockey players who may be shooting pucks at them, or hitting their heads with sticks, or body-checking them. But for a fall on a hard surface like ice or a sidewalk, bike helmets are just as protective as hockey helmets  that is, neither can prevent an unlucky concussion, but both will keep a goose egg or a gash to a reasonable size.

The supervisor of the citys leisure and instructional skate programs in Etobicoke has agreed to meet in early February. Well swap information about the requirement for little kids in Toronto to wear hockey helmets when they go pleasure-skating. He says hell bring along a recreation staff who is a helmet specialist. Watch the newsletter for follow-up.