You are on the [Editorial] page of folder [Helmets]

When you search the web for sports-related head injuries, you come across a site called Play Safe Initiative (PSI) which says it's "a collaborative approach to reducing injury risk in sport and physical activity through research, education and innovation." It's a joint project of Sunnybrook Health Sciences Centre (RBC First Office for Injury Prevention) and Lakehead University, and it has a long list of partners including government as well as sports associations.

In 2011, the organization got an Ontario Trillium Foundation (OTF) grant for $291,100 by partnering with the Dr.Tom Pashby Sports Safety Fund. The partnership was helpful because OTF does not normally give grants to large institutions like Sunnybrook Health Sciences Centre -- OTF is meant to relate more to community organizations. The grant "provides a platform for injury surveillance, data collection and analysis to support resources, programs, education and policies to reduce and prevent injury during physical activity." The partnership with community sports groups means that the Play Safe Initiative can gather data from community groups who are actually involved in the day-to-day of the sport.

We became aware of this group by happening upon some public minutes from an April 2012 "Stewardship Group Meeting" hosted by the Coaches Association of Ontario. The minutes mentioned the OTF grant's "Year One expected results," which included "Increased injury data collected, aggregated and made available to stakeholders and the public."

That seemed very promising, but even three years later we couldn't find the new data we were hoping for, on the organization's website. But they do point out that there are a lot of holes in injury data: "There is no reliable source of sport and recreation injury data in Canada. Though sport and recreation organizations keep record of injuries in their programs, data is not collected, stored and analyzed in a way that facilitates an understanding of injury or drives evidence-based prevention strategies. As a result, most organizations would not be able to accurately identify the 5 leading injuries or causes of injury in their programs."

Certainly there seems to be no injury research specific to the non-contact (shinny) hockey that's our focus at CityRinks. Even the data for full-equipment hockey is described by the Play Safe Initiative like this: "No system in Ontario, Canada or the world captures injury in sport and physical activity that would provide an accurate rate of injury."

The "Physical Literacy and Injury Prevention Guide for Leaders"

One of the booklet's features is the number of times it calls for evidence-based research. It also emphasizes the need for public acceptance of sports safety rules (an example would be mandatory helmets at outdoor shinny hockey rinks). Otherwise the approach won't work even if there is evidence that they're good rules. Interestingly, more research and public approval are the two main points that CityRinks has been putting forward, asking that the not broadly accepted mandatory-helmet rules for outdoor shinny hockey at Toronto outdoor rinks be replaced by personal choice until there's research to back them up.

Evidence-based research (for starters): there is so much shinny hockey at Toronto's outdoor rinks that tracking shinny hockey injuries would provide a vast amount of data. The city's rink staff already have to fill out an injury form for every incident. And the Play Safe Initiative lists the City of Toronto office of Community Partnerships as their network partner. So what's holding them up from collaborating on information gathering?

Hard to tell. We have to wonder, though, whether the call for "evidence-based research" from many sports groups including the participants in the Play Safe Initiative and the City of Toronto sports bureaucracy is not where their heart is. There seems to be is a preference for compliance and enforcement, reflected for example in this excerpt from the "Physical Literacy and Injury Prevention Guide," calling for laws and regulations that have a "high probability (or perceived probability) of enforcement" and when the rules are not followed, "punishment is (or is perceived to be) swift and severe."

The guide also calls for the adoption of safety equipment that results in "products that dominate the marketplace." That reference points uncomfortably to the close relations between business and sports -- examples like the president of Hockey Canada (the lead in setting helmet rules) also being a director at Bauer Sports, the main Canadian helmet manufacturer, until recently.

Evidence-based research needs a lot of curiosity, absence of foregone conclusions, and flexibility of inquiry. So far the jury is still out on the capacity of the existing sports organizations and bureaucracies to come up with those approaches. There are various blocks -- turf struggles, funding problems, disagreements on definitions, puzzles about how to frame the questions. The efforts of CityRinks to join in the discussion have been generally unwelcome -- we're not part of the club. But the clubbishness in sports is a problem, and until new voices are invited to the table, it's hard to see how the narrow outlook that prevents good research can open up.

Post script: CityRinks applied to the Dr.Tom Pashby Fund for a donation of helmets that we could incorporate into two skate loan collections. Since the board did not approve of our call for more "evidence-based" research into shinny hockey in advance of mandatory helmet policies, they decided to give the helmets to the City of Toronto instead of CELOS. Their letter explaining their decision is here.

City staff placed 20 helmets at Dufferin Rink. Regrettably, after only three months of rink season, those helmets had all disappeared. As of February 2016, the remaining helmets are still in the staff offices -- safeguarded, but not providing protection for beginner skaters nor allowing school classes to make use of them on rink visits.

We asked the Canadian Institute for Health Information (CIHI) about the most recent trauma tables, hoping to get some help there. But the data are much too general, dividing hospitalizations into only two categories, hockey and ice skating. What kind of hockey? Roller hockey? Ball hockey? Field hockey? What?

There is a fascinating study of athletes' hostility to concussion research in the December 2012 issue of the Journal of Neurosurgery. It certainly makes sense that young athletes would want to keep playing no matter what, same with the coaches who may still dismiss a concussion as a "player having his bell rung -- if he's confused, tell him he's Wayne Gretzky and send him back out on the ice."

Helmets have lost some of their luster in both the medical and the sports media. It turns out that they are of limited (or no) use in preventing concussions -- which is really their main purpose, as far as many skaters are concerned. The City of Toronto has hung on to its 9-year-old mandatory helmet policy, requiring all shinny hockey player to put on head armour. But noncompliance by shinny hockey players continues to rise citywide. The citys inability to enforce its own policy should be a flag to rinks management. It's time to revisit the helmet rules, but with a different procedure than the last time. Instead of a staff decision made at a closed meeting at City Hall, the city should welcome wide-ranging rink-user input.

CELOS, the Centre for Local Research into Public Space (the sponsor of this website) has put out a "Special Helmets Issue" to collect the facts. 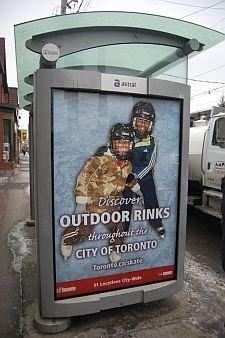 For several years, cityrinks has been asking City staff why they don't run any bus shelter ads promoting the outdoor rinks. The answer was "no money," but that must have changed. A rink user recently sent this photo of a bus shelter ad space at Dundas and Bathurst. He supplied a caption for the photo: "nothing says fun like skating with a cage over your face." And indeed, this photo is an ad for helmets, not for rinks.

The promotion of mandatory skating helmets by the City safety bureaucracy comes at an interesting time. Concussions among helmeted professional hockey players are on the rise. The Neurotrauma Impact Science Laboratory in Ottawa said this week that today's modern helmets do very little to protect against concussion. So it's back to the drawing board for helmet manufacturers.

At those outdoor rinks where the city's mandatory helmet policy began being strictly enforced four years ago, shinny hockey took a nose-dive in popularity. Skaters never embraced the policy, and rink staff grew tired of having their primary role be helmet enforcement against skaters' wishes. This year, there are few rinks left where skaters are evicted for not wearing helmets, except in the hockey-board outdoor rinks in Etobicoke and North York. Those rinks are named "major" rinks. Public shinny times there, with helmets still mandatory, have much lower attendance than do the nearby unstaffed "minor" outdoor rinks without nets or hockey boards -- which are hopping with pick-up pond-hockey games.

Even though free-style, mostly helmet-less games have been going on at the "minors" (and at the busy downtown neighbourhood rinks) for decades, the claims against the city for head injuries (with or without helmets) have so far been -- zero.

Opening the helmets issue for public discussion: impossible in 2010 - 2012

The helmets for pond hockey meetings needed the collaboration of city rink management to take place. Not only was city management unwilling to engage with the issue, their work of closing off local rink user connections was expanded. Local telephone contact between rink users and staff was removed in favour of a central information line/web page. This information source was often wrong, and more rink users turned to the CELOS cityrinks website. Usage increased to the point where we had to upgrade the server so that more volume could be accommodated. Local rink conditions updates sent in by rink users were not accepted by the citys central 311 information line, and the prospect of monitoring rinks citywide without staff collaboration was not within our budget.

The No-helmet-no-shinny policy was energetically but very intermittently enforced, with most of our rink-visit photos still showing traditional mixed helmet/no-helmet pond hockey. At the same time, during periodic enforcement blitzes, regular pond hockey players complained to cityrinks about being told to leave if they chose to be helmetless. We expanded our documentation about the reduction of rink use, the absence of injury claims and the broader rink issues needing oversight. We set up meetings (ongoing) with individual councillors who had outdoor compressor-cooled rinks in their wards, showing them our slide show/video The social life of outdoor rinks, in hopes of increasing their interest in this neighbourhood resource. In these conversations we learned that many city councillors have not thought much about the rinks at all. We also learned that many councillors are under the impression that the Parks, Forestry and Recreation operating budget has been cut most years, so that no improvements can be made. (In fact the operating budget has gone from just over $200 million in 2002 to just shy of $400 million in 2013.) In the light of the existing knowledge gaps, combined with a systemic unwillingness to collaborate, our idea of focusing on specific fixes like the non-consultative helmet rules (or the locked rink houses) seems sadly premature. However, the groundwork is laid. With patience and the help of our picture shows, it may be possible to enrich public conversation about good stewardship of the rinks, within the next few years.