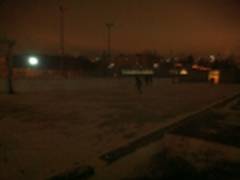 The night before opening day. Lights off, rinks have ice, skaters trying it out!

i have been playing at scadding and at other rinks in the city for 15 years, so i know a lot about outdoor hockey in toronto. I had some issues with how scadding was being run last year in terms of the number of permits they issued. They basically killed the game at the rink by over booking permits, 2 people would show up to play their permit and 30 people would be kicked off the ice. Every week night had a permit, and 3 of 5 weeknights had permits from 7-10. After working my way through several layers of bureaucracy and not having any luck getting anything changed i gave up. I figured well what can i do?

One good thing they started doing at scadding 2 years ago was not locking up the actual ice surface at 10 oclock .The change rooms would close at 10 but the lights would stay on until 11 so even if there was a double permit booked that night u could go and skate around for an hour. However near the end of the season last year, they started kicking everyone off the ice at 10 and locking up the ice surface... when i inquired about it i was told that there had been noise complaints... which was strange to me for a number of reasons. This year they have continued with their early closing of the rink and also have been kicking people off the ice and locking it at 6 on sundays. This past sunday there were 25 people playing hockey at 5:45 who had to get off the ice, supposedly "for insurance" reasons .... i dont know how that makes sense when they pleasure pad is still there and people can play or skate on it 24 hours a day. 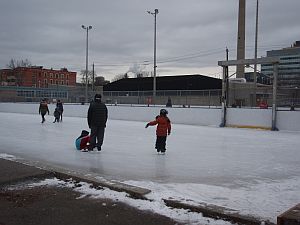 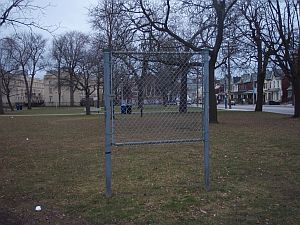 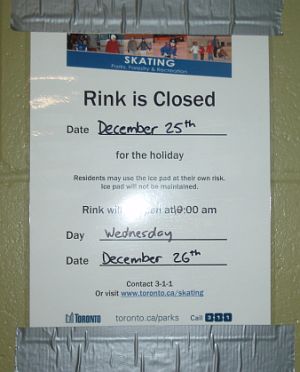 Lots of people at the rink, ice looking good. The change room was open and there was a rink attendant inside. I took a photo of the poster and then complimented the rink attendant on the fact that there is now a washroom accessible from the inside of the change room. Until this year, skaters had to go around the back of the building to the dingy washrooms there.

The rink attendant asked why I had taken a picture. I said that I had taken a photo of the poster, to show that there was an up-to-date sign of the rink holiday hours. He said that no pictures were allowed without staff permission and I should have asked him before I took a picture of the sign. I asked him if he knew the reason for the photo restrictions. He said that reasons for a law don't matter -- you have to obey the law whether a law makes sense or not.

This rink was one of six listed to be open on New Year's (and Christmas and Boxing Day as well). And indeed it was open, with excellent ice freshly zambonied and the change room open with a friendly staff person. The odd thing was that at 10.30 on a perfect sunny morning, this usually busy rink had only five skaters on the pleasure-skating side and no one at all on the shinny hockey side. Wallace Rink, also open, had 21 skaters already. Could that have been related to the absence of even a single notice at Harry Gairey, saying the rink would be open on New Year's Day? 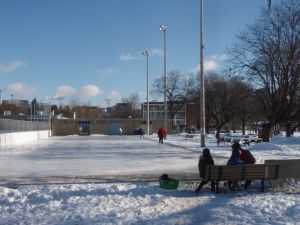 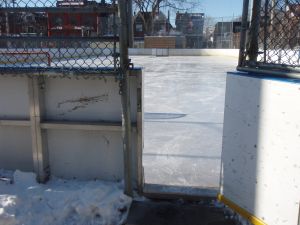 The old notices from 2002, up for years, have finally been removed from the bulletin boards. What remains to be done is to put up new, current notices. But there's progress, outdoors and inside too. Rink users no longer have to go around the outside of the building into a scary, isolated washroom. An opening has been cut into the wall, giving access to the summertime women's washroom connected with the swimming pool. The stalls are unisex: very progressive. The rink attendant says no one has complained about that.

There are a couple of issues with the toilets, though: (1) two of the stalls are marked "out of order," one apparently since the first day of the rinks season. (2) The toilets are pretty nasty-looking and smelly. Still a lot better than nothing, though, and mats are laid up to each toilet, so no skates are dulled.

And one more general issue: the change room heater blasts out hot air -- too warm! It would be good for the city's energy-saving aims, to turn down the heat. 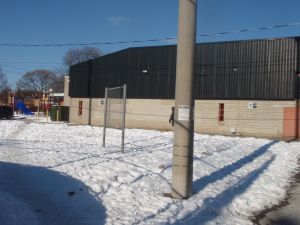 rink bulletin board without bulletins 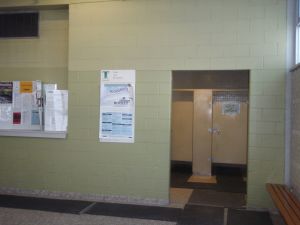