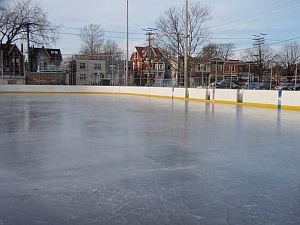 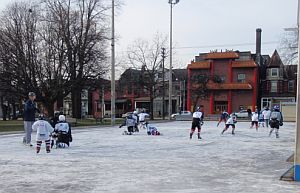 Hockey in the neighbourhood on the pleasure-skating pad

At 10 a.m. the hockey pad was closed because the supervisor felt the ice was too thin. However the "Hockey in your Neighborhood" practice took place on the pleasure-skating pad. A truck came to deliver a zamboni. The two staff who were delivering it said they had intended to flood but they decided not to because the kids were on the ice. It would have taken two minutes to clear the kids off while the zamboni went to the hockey pad and built up the ice. But they just put the zamboni in the garage and left.

Luckily, the regular maintenance staff for this rink is very good, so the ice will be built up soon. Today they must have had their hands full, because they also service Ramsden Rink, and that rink was also closed on the hockey side. The pressure to open up that rink is greater because they have the Toronto Maple Leafs coming to do a public show-and-tell practice there on Tuesday. At 4 pm the Harry Gairey building attendant says that the hockey rink will stay closed until tomorrow because the ice is too thin. The pleasure-skating side is being used for hockey today because the ice there is thicker.

At 5 pm, ice maintenance staff were hand-flooding the hockey side, and saying it might be ready for tomorrow.

Harry Gairey Rink got its zamboni today, at last. 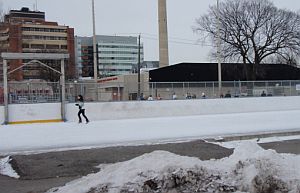 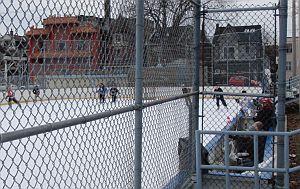 The building attendant sat motionless at the back of the changeroom with his feet on the desk, showing a pair of new-looking city-issue boots. My request to put up the ombudsman rink poster in the rink changeroom was not welcomed. The attendant said he would have to talk to his supervisor, but he was not willing to call him, saying the supervisor was busy.

So I went out to the outside bulletin boards. Both had only out-of-date signs from some years ago. I taped a poster on each one. 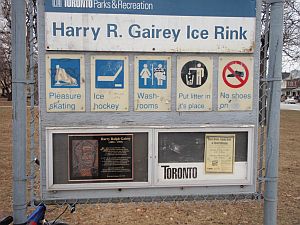 frayed plywood, the only poster is from 2007 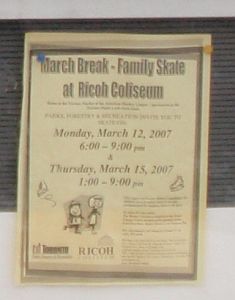 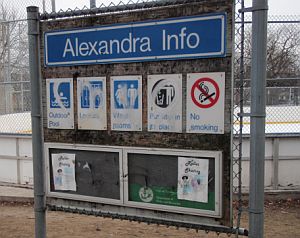 The ombudsman poster on the out-of-date bulletin board to the north of the rink had been removed. The rink was open but the change room was closed. A hard-to-read poster between the thick wire mesh of the locked change room door announced that the room would be locked on New Year's Day. This was despite the fact that there was a zamboni driver in the office. 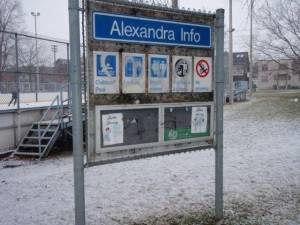 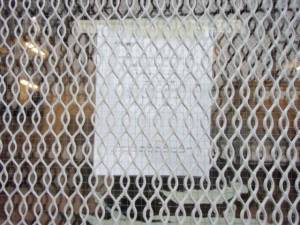 rink will be closed on New Year's Day

At 3 pm it had begun to flurry pretty heavily and the skaters were running for cover under the building overhang. 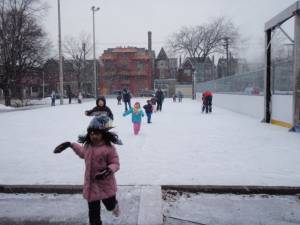 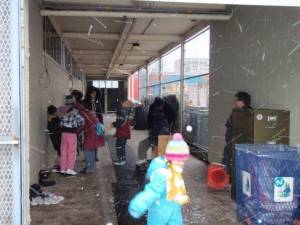 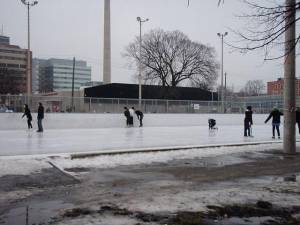 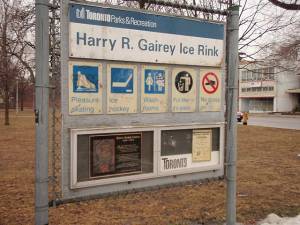 At 3.15 pm there were 17 shinny hockey players, one with a helmet; 11 pleasure-skaters, with 6 more on two benches nearby; and 5 skaters changing inside. The rink's building attendant and the rink guard said they tell people that helmets are recommended, but they can't force them, and most shinny hockey players won't wear them.

The ombudsman poster that I taped on the south outdoor bulletin board has been removed, so once again there's only the March 2007 sign on it. The rink staff person says he can't allow me to put up a new poster inside the ink house until he checks with his boss.

The zamboni driver said that he's not worried about the ice getting too thick, that three inches is fine, and he makes sure it stays the right thickness. He also says that if it rains, he removes the extra water.

Sample numbers at 3.20 pm: There were 17 shinny hockey players including one woman and one kid. The kid and one adult were wearing helmets. There were two pleasure skaters, and no one inside.

Staff on-site: one zamboni driver and one building attendant.