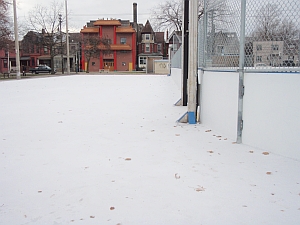 The ice is in although not thick. A city staff person said that the compressors were turned on sometime during the weekend. The maintenance staff weren't expecting it, and so they hadn't moved the nets, which froze onto the ice. No water had been put down but there was a fair bit of rain, and it froze on contact.

The hockey side is locked but the other side has no fence and could be skated on. But no one is expecting the rink to be open (the schedule says Dec.6), so there are no skaters. 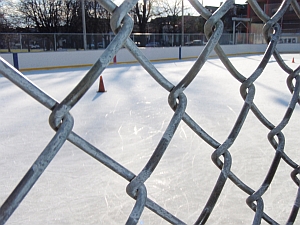 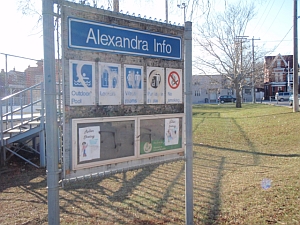 The rink looks pretty good and ready for skating, and the compressor building has lots of steam coming from the condenser. The mats are neatly laid out too. What's missing is only some signage, letting people know when the rink will open, or anything about its schedule. The south bulletin board ("Harry Gairey Ice Rink") has a skating poster from March 2007. The north bulletin board ("Alexandra Info") has two roller blading posters. The rink doors has a sign saying "rink changerooms." Nothing else. 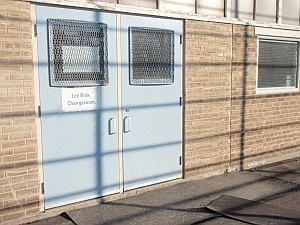 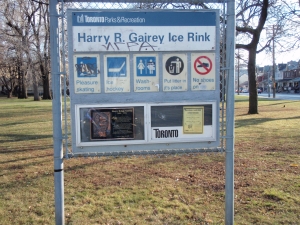 Rink is open for the season, with good ice.

At 9 pm a permit was just finishing and the zamboni was preparing to do ice resurfacing. The ice looked good. The rec program staff person said the rink had been back in operation around 3.30 that day (there had been 2-3 inches of snow overnight from Wednesday).

This rink has its own afternoon/evening zamboni driver, who apparently cleans the ice "whenever it needs it," sometimes four times a shift. The rest of the time he sits in a back office away from the rink, and the two program staff sit in the changeroom by a desk in the corner or, in the case of the rink guard, go out and skate around a bit and then come back in.

The staff said they require all permit shinny players to wear helmets because the permit office said it was mandatory. However, for drop-in shinny hockey the staff don't insist, because most of the players wouldn't wear a helmet. The staff also say that other than three permits and weekend lessons at the rink, they don't really bother trying to enforce age levels for shinny -- they try to just let everyone play.

This rink was one of the earliest to get the snow cleared off and reopen -- around 12 noon. At 9 pm the zamboni was on again (it had already begun to snow, second storm).

Mild, 9 degrees, earlier rain showers that left a layer of water on the ice. At 7 pm the rink was fairly dry, even though the zamboni operator said he had only gone on a few times, since he was worried that he might hurt the ice.

The ice has been good here for most of the day. At 4 pm, the zamboni operator had just put on a flood, which was surprising given the amount of rain in the last 24 hours. But he said the ice would be shaved down a bit in the next few days to keep it low. And it looked great, with lots of skaters on the shinny hockey side. 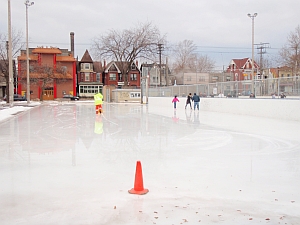 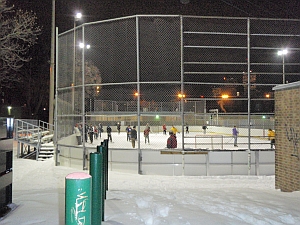 view of the rink from Bathurst Street

At 9.30 there were two pleasure skaters, with two more getting their skates on, and sixteen shinny hockey players in a game, plus nine more waiting against the boards. The zamboni driver reminisced about his days working on natural ice rinks in Scarborough, ploughing and then hosing at 3 in the morning. Scarborough has only indoor arenas, with the single exception of the outdoor civic rink at the Scarborough Town Centre. The driver said they kept on making the outdoor natural ice rinks until a few years after amalgamation, and then it ended.

He said he used to play hockey, but now his knees are bad, but he knows guys who still play twice a week, who are older than 70.

Bright sunshine, a beautiful day. At 2.45 pm the rink was a bit mushy but not bad, and there was a good shinny game going on, with a fair number of pleasure skaters on the other pad. The zamboni driver said that since he has a small zamboni for this rink, it takes him longer than usual to clear snow off the ice after a snowfall and it also takes longer to flood because he has to go and refill in between. 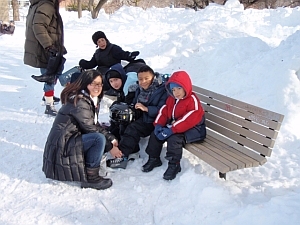 bench for skate changing --snowed in! 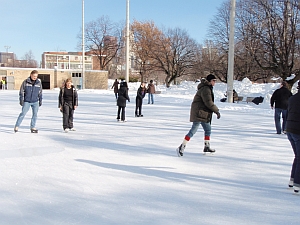 a beautiful sunny day for skating 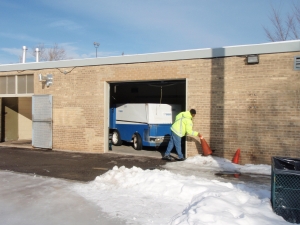