1:50pm Low 10 high 14 celsius. A view from the Bathurst streetcar shows 2 players on the hockey pad and no one on the pleasure pad. 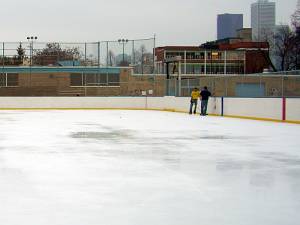 2 players on the hockey pad 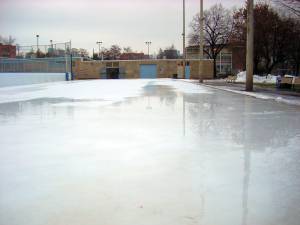 3:40pm Low 10, high 15 celsius. There is a lot of water on both the hockey and pleasure pads, but the ice underneath is solid. There are 2 players on the hockey side. One of the players says the shinny side was busier earlier and probably will be again later.

12.30pm: Ice good. Twelve on hockey side, three on pleasure-skating side. There appears to be only one staff person around. He was courteous and helpful when I asked about holiday schedules -- but told me they have none, really, that people can just play shinny hockey anytime except on Saturday mornings during the "Timbits" hockey program when the kids are out there in full equipment. He said that there were some city schedules but there are none left.

A few things could use fixing:

1. The washrooms have no signage, just "women" written in faint red magic marker, right on the door.

2. The outdoor bulletin boards are not up to date: 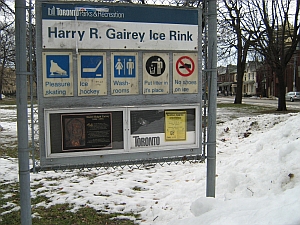 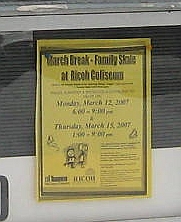 only notice is from March 2007

The public access path to the south of the rink pleasure pad is unshovelled and icy: 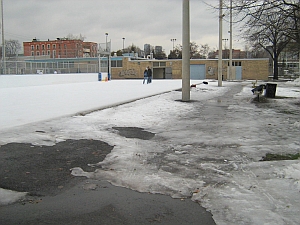