At 4.45 there were about 15 skaters, mostly kids, on the hockey pad (but just skating), plus one very fine figure skater on the pleasure-skating side.

At 3.45 p.m. at Harry Gairey Rink, staff were just leaving and the rink was closed, with water om both sides. Staff said that the machinery was 40 years old and weak. (Actually the machinery was replaced in 2006). Perhaps the water was there because the rink had just been flooded? 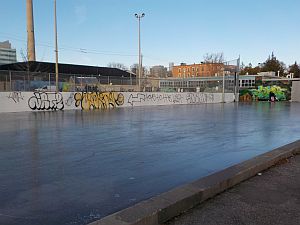 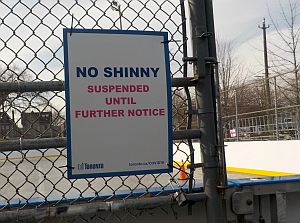 At 3.30 p.m. Harry Gairey Rink in Alexandra Park was empty, with the hockey side locked, although the ice looked okay on the unfenced side. People in the park said that there been lots of skaters earlier.

Harry Gairey in his 80s

The weather was grey overcast, not too cold, pleasant for skating.

Parents and tiny children with their mandatory helmets, using the big blue skating supports. One Mother was dragging her protesting son around on his skates (no escape from moms determination).

Interior change room (no doors, or not closed) separating the washroom sinks and toilet cubicles. The skate exchange was set up on the floor, about 4 staff there. I counted 70 pairs of skates, the number of adult skates is small and getting smaller per event.

The staff said that the majority were exchanging or getting skates for their kids as they grew into bigger sizes. There was a bump in the number of womens figure skates that had been taken in. This was taken advantage of by a group of women who came in.

The staff said that the majority of the skates had been sharpened, the exceptions being the one donated on the day.

Staff were giving out free self-assemble plastic skate support kits, but people seem to like the big blue ones that were out on the pleasure pad already.

She showed me a donated helmets bag that is used to loan to under-6 skaters so that they did not miss their chance to skate because of the under-6 helmet rule. 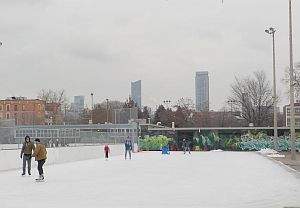 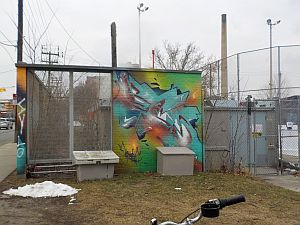 machinery is in a separate building by the street 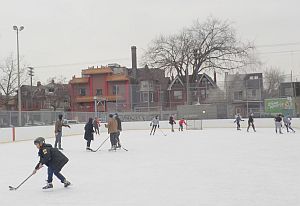 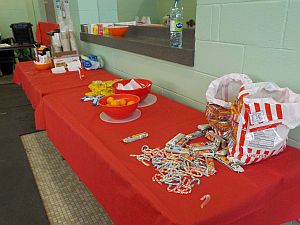 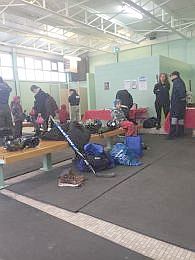 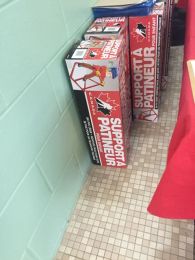 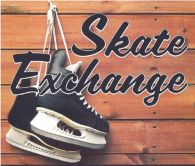 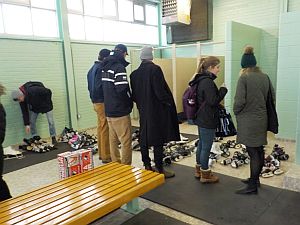 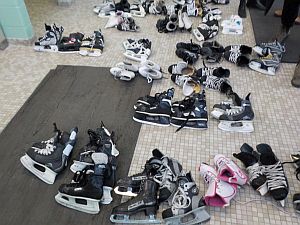 The main connection between the street, the rec centre, and the rink, has not been cleared of ice and snow. This is not surprising, given the tunnel vision of many city rink staff (and their supervisors). But a lawsuit waiting to happen, maybe. 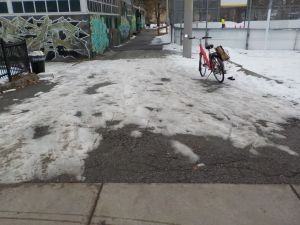 ice and snow on the main path 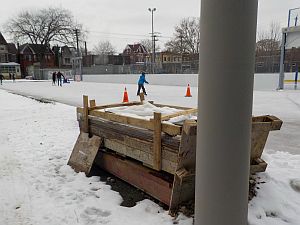 skateboarders' rides neatly packed up for the winter

This rink has had a slow start this year -- it's not unusual for staff to outnumber skaters in the daytime. 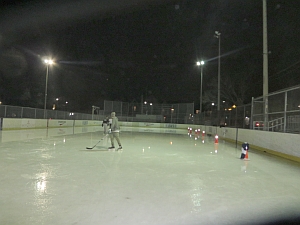 This rink was closed for the season today.

The rink has the pleasure-skating pad listed as closed and the hockey pad listed as open. They both seemed more or less equally water-covered, but with lots of ice. At 7.45 pm, three hockey players were hitting a plastic water bottle around with their sticks, and cheering when it moved any distance through the water. A puck moved also, but never very far.

Saturday morning 'hockey in the neighbourhood' session -- MLSE logo on the back, Tim Horton's logo on the front

The hockey side was listed as open at 10 a.m. The pleasure-skating side was still listed as "snow-covered."

The rink was closed all day because of the the snow/rain mixture overnight.

The rink was listed as closed but the ice was fine. 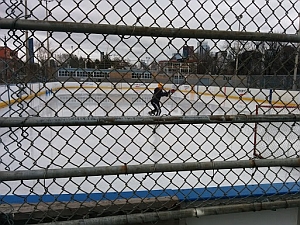 hockey side, layer of water on top of good ice 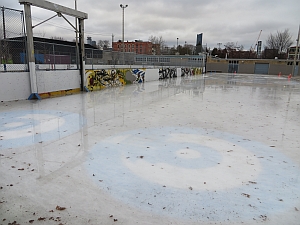 pleasure-skating side, curling circles on top of nice thick ice

This rink is popular and yet an orphan -- so many of its details show the lack of care. But still better than formerly. Is that enough?

It has lots of potential as a neighbourhood social space -- there's so much room in the rink house (pool building in summer). Ten years ago there were grandiose plans to knock down the building and put up a new one. That would have been a waste of money. But with very little money, the existing space could become a gathering spot. 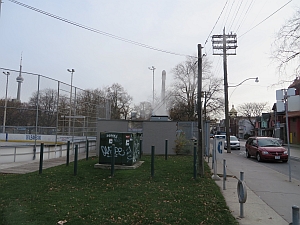 compressors on, steam coming from condenser 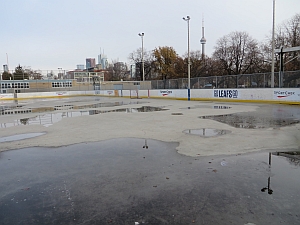 hockey side is pretty clean 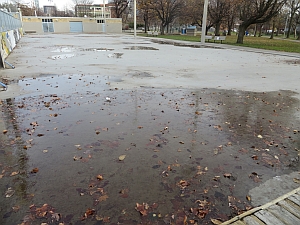 leaves stuck on pleasure-skating side 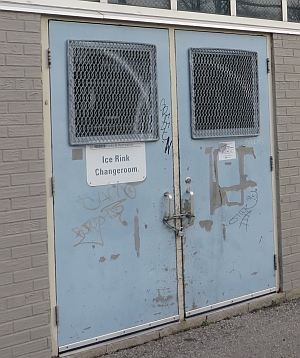 door looks beat up and slummy 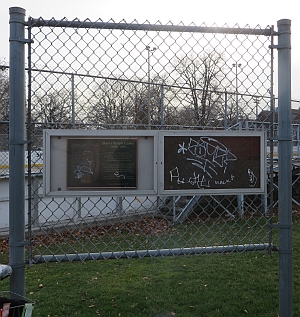 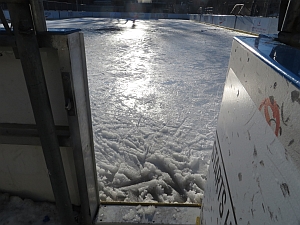 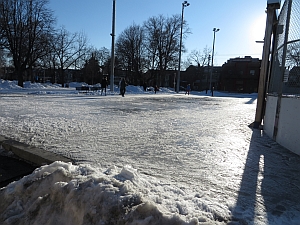 There's curling at this rink most days: see the schedule.

Even thought the temperature went up to 14 and this rink only opened yesterday, the ice held. But there was plenty of water on top of the ice, and not many people came to skate. 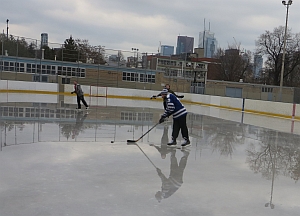 shinny hockey side: water on top of ice 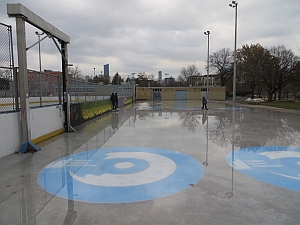 pleasure-skating side: water on top of ice
w

This rink has been re-opened despite its scheduled Feb.23 closing. On Sunday March 1 at 10.30 a.m., there's a shinny game. The change room is open and warm and more players are getting their skates on. Skaters comment on how good the ice is. 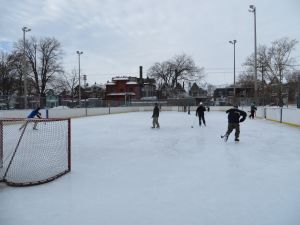 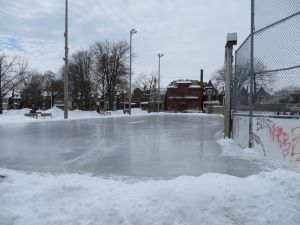 empty on the pleasure-skating side

The rink is listed on the city's website as being open for shinny hockey from 10 to 3 on all the big holidays. But that's not what the posters at the rink say -- the building and washrooms are listed as closed for Christmas Day, Boxing Day, and New Year's. However this morning at 10.50, most of the ice had been cleaned by the zamboni and it looked to be almost ready for skaters.

At 9.50, the ice looked excellent, much better than many of the other city rinks today. The change room was locked. The bulletin boards had no outdated information on them (but no schedules either). 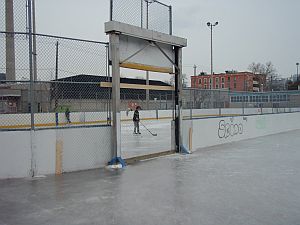 a new chain-link adaptation for the west lift gate 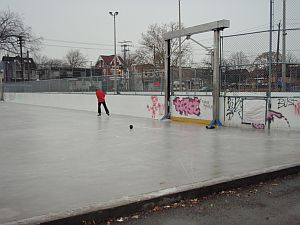 not many people there yet, but very nice ice