Harbourfront started making ice on Sunday, the day before yesterday. It's melting in the noontime sun, but we'll see -- maybe the early start will still help them be the first to open. 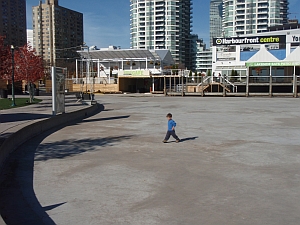 Nov.6: clean as a whistle, ready to freeze 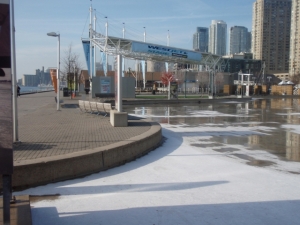 ice melting a bit in the sun 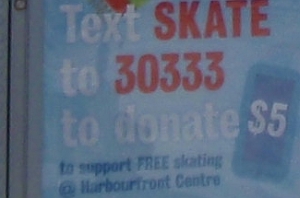 From the Harbourfront website: "warm up by the fireplace, and enjoy gourmet coffee and hot chocolate in between ice time! Specialty winter comfort food demos (chili, mac & cheese, soups) will also take place in Lakeside Eats every weekend at 2pm throughout December."

The ice at Harbourfront looks well started. There were two people out on the zamboni at 11.15 pm when we visited (very small spray, but steaming), and at 12.30 the webcam shows the zamboni going around still.

The webcam shows the zamboni going around.

11:45 am: - the change room was bustling with people putting the finishing touches (stocking snack bar etc.), they confirmed that they'll be opening tomorrow - the ice looked good & just about ready, they'll put down one more layer tonight and be open for business in the morning.

The rink is open (webcam) and it looks good -- despite the sun and warm temperature, they expect to be able to stay open all day until 11 pm. The city staff say they can do that because they have much higher government funding than city rinks, and much better compressors. But up until last year (maybe this year too?) they still had their original compressors from 1983. And some of the city's rinks have the same amount of horsepower. We heard that Harbourfront has to cover most of their costs with the skate rentals -- that it actually gets less funding than city rinks do. 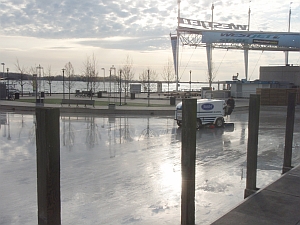 taking water off the ice, 3 pm 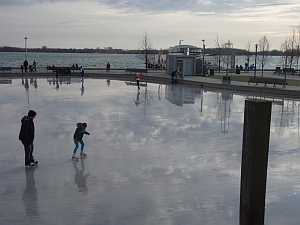 skating on the sky 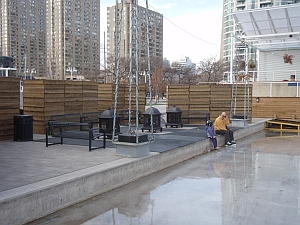 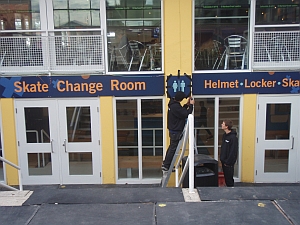 new signs for the change rooms 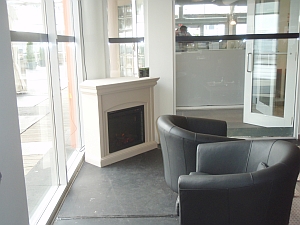 electric "fireplace" in the restaurant (!) 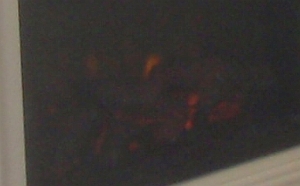 the fire in the "fireplace" is a TV image

11.50 pm: the webcam shows even more people than were there in the early evening when the lights were on. Now one can just make out dozens of people skating around in the dark -- such a beautiful night for a skate by the lake.

At 3 pm the ice is so wet that no one is skating -- the staff are asking people to check back at 8 pm.

At 6.30 pm the ice has zamboni tracks that look slushy and also quite a lot of craters right down to the cement. They look a bit like the craters that can come when a zamboni goes on soft ice and dislodges pieces of ice -- too bad, if that happened, they were doing well.

At 11.30 the ice had been repaired and there was no sign of any cement, although some layers were pretty thin. The staff said they had already put down ten layers from 8 a.m., and that they're planning to do night-time floods both tonight and tomorrow. Their voice mail says that the rink is closed today "due to adverse weather conditions."

The rink has been fine and busy all week -- no more closures.

The rink has been full all day, and at midnight there are still at least 40 people skating around -- although the staff must have long since left. The temperature is 13 celsius, but the ice is good.

At 40 minutes after midnight there are 8-10 people skating around, looking really fast and lively. 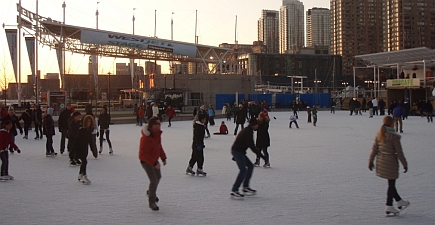 Harbourfront was so busy it looked like it would be hard to shoehorn in one more person at the skate rental room. Out on the ice people looked like they were having a really good time. There were two mobile News vehicles parked at either side -- so pretty soon there would be even more people getting the bright idea to come skating.

Overhead there were planes landing and taking off at Porter Airlines. At the other extreme -- there was a big old wooden sailing ship tied up just east of the rink.

The ice was too crowded to do a lot of fancy moves, but it seemed like the point of the outing for many skaters was more social anyway. Everywhere there were little circles of people standing around chatting.

Overheard afterwards, at Canadian Tire, while in the skate sharpening lineup for new skates: "Where do you skate?" "At the Harbourfront." "Are you a good skater?" "No, only three time" -- and here the newcomer's supply of English words was exhausted. But his smiling gestures made it evident that he was now determined to go back to the rink with his brand new skates until he mastered the art. 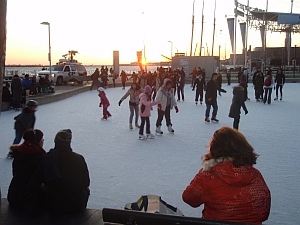 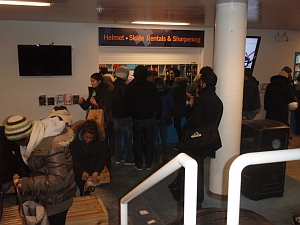 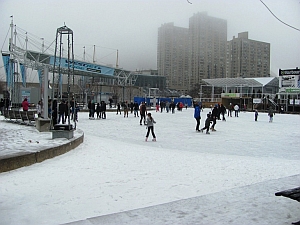 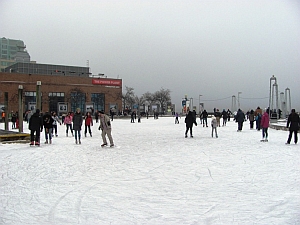 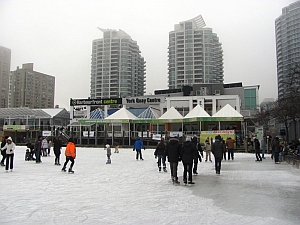 From rink user Rafael Lewis, taken during his lunch break: It was a foggy day, but it gave the rink a nice ambience. There were a lot of skaters (mostly teens and older) and there was one rink guard (visible in one of my pics - she was in orange). There was one bench that the rubber mats did not extend to (which ironically was the only bench available for me to change into my skates on due to the crowds). However aside from that minor inconvenience, it was a fun time!

At five minutes to midnight, and minus 14 celsius, the webcam shows four skaters skating really fast around the ice. Beautiful.

Lunar Dj Skate Night at the Harbourfront Centre last night. The place was packed with mostly teenagers. There was a volunteer handing out flashing blue LED lights that skaters were attaching around their necks. There was also a sign saying that a photographer would be taking pics of the event. At times it felt like traffic was crawling, but overall it was a good time with good music and a great atmosphere. 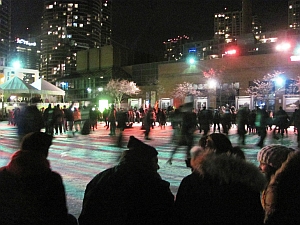 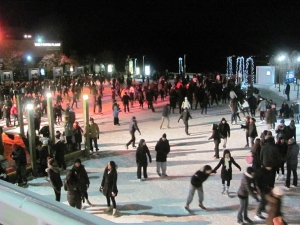 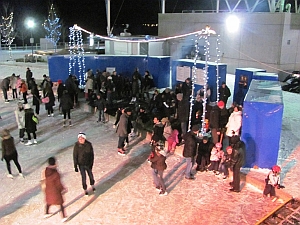 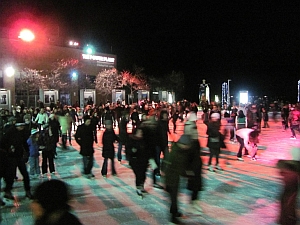