On this foggy cold morning the rink was clean and an attendant said they've turned on the compressor to cool down the slab. The mats were half laid down already, and inside the renovated skate rental area, a workman was putting up new shelving. The rink is scheduled to open a week from today, and the attendant said they plan to start flooding Sunday evening. If the slab is cool enough and the rain comes as predicted, the flooding will get a little addition of water from nature.

There's a pleasant feeling of things being under control, without cliffhangers of timing or staff selection. 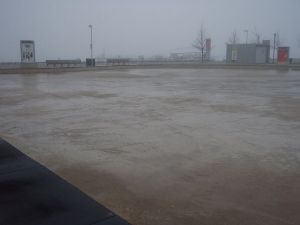 no leaves or dirt - clean rink 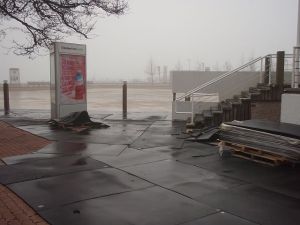 mats being put in place 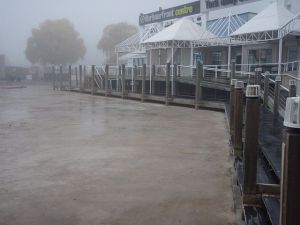 risers are all fitted with mats already 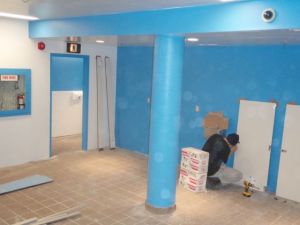 Weather: low 8, high 10, cloudy with showers and some fog

A thin layer of ice, mostly melted. Staff are preparing skates, carpenters are rebuilding shelves. Staff say that they put water on the rink for only four hours during the night -- to test out how the redesigned section of the rink (and extra 40 feet of pipe) is working. He said it worked fine and they plan to do the full 12-hour ice making shift overnight.

Weather: low +3, high +9, sun and cloud in the daytime, heavy rain in the evening and ovenight

Nice! A good layer of ice is on the rink, smooth to slide on. 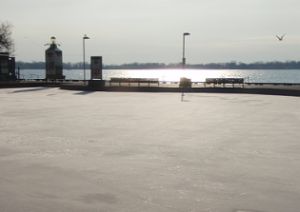 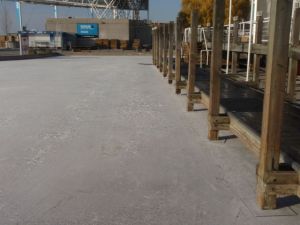 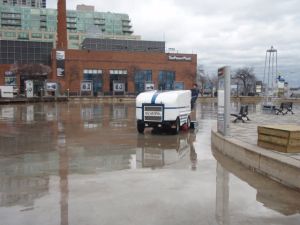 rain took the ice out, Olympia taking off water

It poured with rain last night, and the rink lost the ice. They had the same rain in New York and at the rinks there, they just took the water off. So rain isn't a disaster if there's already a good layer of ice, But if the ice is only just starting, heavy rain will overwhelm it.

I was talking to one of the rink workers, who said he'd worked at the rink for 20 years. He told me they still have their two little 50-Hp compressors from 1983. The rink manager was quoted in the Star, saying that Harbourfront has ``massive compressor. This needs a bit more research.... 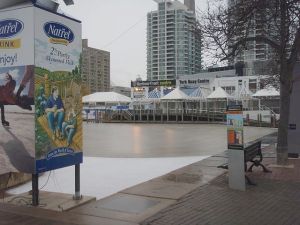 the ice is back, shiny where the Olympia groomed it

The ice is back, looking good. Workers are finishing up the renovations inside the skate changing area. Helder Melo, the facilities director at Harbourfront, was checking on the work. He showed off their freshly painted washrooms. He also corrected the compressor-strength information -- Harbourfront has two 100 Hp compressors, he said. So they have a total of 200 Hp compared to the city's double pad rinks, which have between 150 and 225 Hp depending on the rink. Of course, Harbourfront's ice area is also bigger.

Helder says the compressors are still the same ones they started out with, when the rink started up in 1983. He can remember the start-up day very well, he said. At 5 a.m. his first child was born, and then he came home from the hospital, showered, and went to open the rink for the very first time. 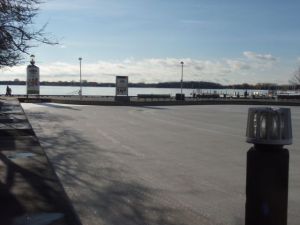 At 10.30 it's bright sunshine and 3 degrees out. The ice is thicker and holding well. A staff painter is painting the floor bright blue inside the changeroom.

The rink is open for the season, the ice is hard, lots of people having a good time. 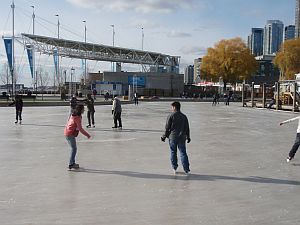 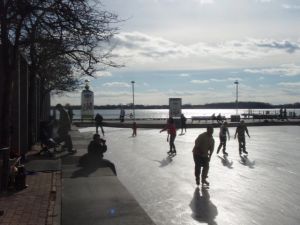 the view to the lake 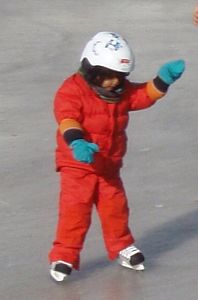 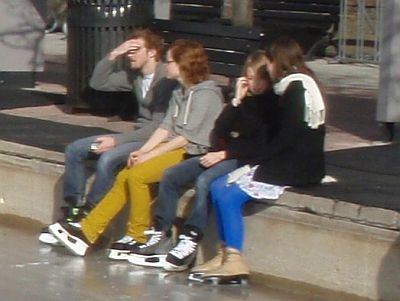 The rink is open, and at 3 pm the ice is wet from rain but hard underneath. Skating lessons are still on. At 9.40 pm the ice is hard and there are only a few wet spots left. There are five skaters. The rink staff say they never had to put out pylons -- the ice was good all day.

Apparently there are six staff who can drive the zamboni. They also sharpen skates, and rent them, and clean up -- staff do everything, just like at the Board of management arenas. Very different than the city zamboni drivers, who clean ice only. 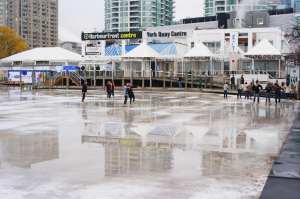 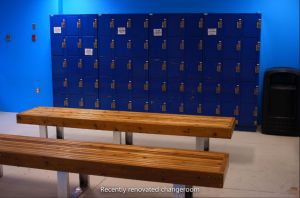 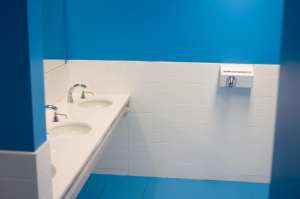 Weather: overnight rain, 14 degrees all night, then the sun shone strong for two hours. A big puddle, but still lots of ice underneath the water. Then cloud and temperature falling to 4 in the afternoon.

From rink visitor Ozren: "Perfect skating weather and conditions.... There were llllloooots of people and I stayed for about half an hour... and when I left at 10.00 there were still people... some learning and some skating with serious skill."

At 11.30 pm the webcam showed a very fast game of pond hockey. At midnight is was over -- they may have run out of breath, that's a big surface for 8 peopel to cover.

5pm: Rink open. Lots of people skating, including a member of staff on the ice and a kids skating class in progress. Ice conditions were poor. There were three very large areas of water. The drier ice was rough with peaks and troughs. It felt slushy and soft. The member of staff on the ice said she thought the reason they could keep the rink open was due to an under-ice cooling system. 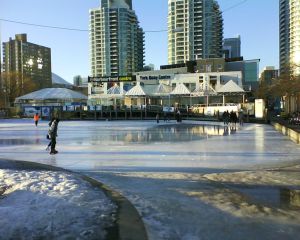 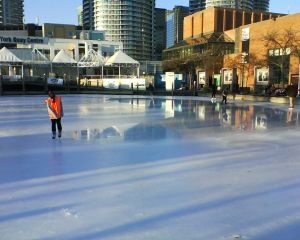 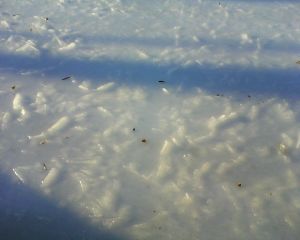 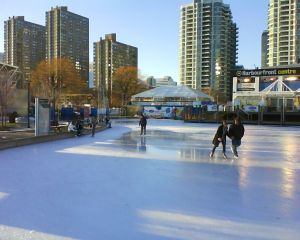 At 4pm there were about 30 skaters on the ice.

A rink guard outside said they didn't have a fire pit but they used 2 burners (shown in photo) on mats beside the rink. The rink guard said they would probably light them later on in the evening.

He said they were doing ice maintenance every hour.

The ice was hard and fairly smooth and dry. 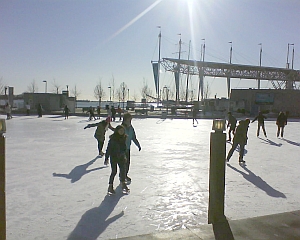 skating on a warm day 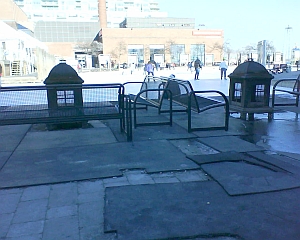 The skate rental guys said they use a can of spray to sanitize their skates called Germist A214 (Hard surface disinfectant and deodoriser tel 905 564 2455)They spray it into the skates once or twice a week and it kills whatever is in there making the bad, bad smells!

The ice was in terrible condition! It was very slushy so that it was impossible for the skaters to glide. They could only shuffle along through the slush. The entire surface of the ice was uneven and pitted in many places.

Some people were sitting at the edge of the ice and the heel end of the blades on their skates had sunk into the ice. They joked that they would call their friends to tell them not to come.

Staff said they are still maintaining the ice with the Zamboni early in the morning and again at around 7pm at night when it gets colder. They said they thought the compressors are doing just about enough to keep the ice from being totally destroyed during the day.

They still want to stay open until Sunday if conditions don't worsen. 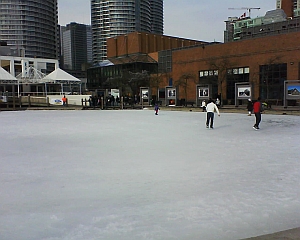 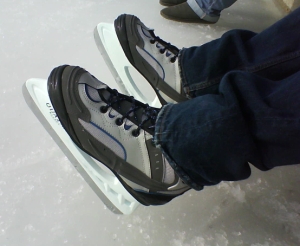 Weather: rain in the morning, then cloudy until mid-afternoon, then sunny. High 9 celsius, low 2.

At 5 pm, the webcam showed about a dozen skaters on wet ice. At 8 pm, a visit to Harbourfront turned up 34 skaters on ice that was a bit rough but firm.