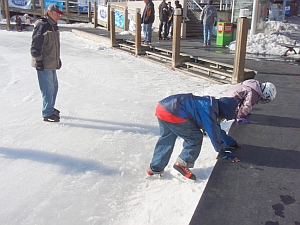 mushy ice with holes all over

5.15 pm Easter Sunday, with about 25 skaters. The rink had many mushy holes that were making skaters leery of going at all fast. Inside four staff were in the skate-lending room, chatting and looking like they were ready for the rink season to be over. The women's washroom was nasty looking, with toilet paper on the floor and one toilet plugged, empty toilet paper rolls in the other two stalls.

Outside, Bob Dylan was playing on the p.a. and there was a wonderful view of old sailboats on deep blue water. But the ice was not really worth skating on. 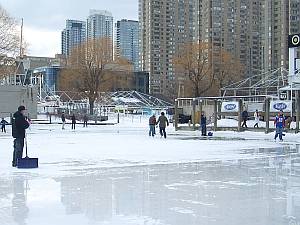 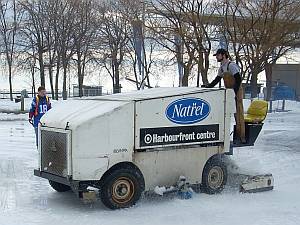 Zamboni stirring up the water
Click on picture to enlarge it

4pm Much of the rink is a lake. Three Harbourfront workers are using shovels in a vain effort to push the water into the drains at the side of the rink. Even though the ice is in bad shape, there are 20 people skating.

At 4:30 skaters are asked to leave the ice so that the Zamboni can clean the ice. The Zamboni, however, can't do much except stir up the water that covers the ice. When it's through, the ice looks the same as before. One Harbourfront worker stays on the ice with a shovel. The 20 skaters go back on. When the CELOS researcher puts on his skates, he finds that some parts of the ice are mush. He nearly trips when his skates hit a soft spot.

The workers seem to understand how bad the ice is. Before the Zamboni came on the ice, one of the workers made an announcement on the public address system asking the skaters to leave the ice. After making the announcement, he made another mock announcement to a co-worker: "Skaters please go home. The ice is slush and it's not going to get any better." 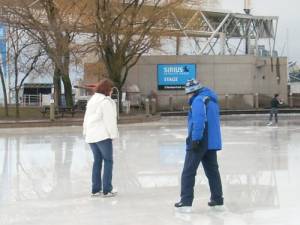 The warm weather didn't stop these people from skating

2:30-3:30 Low 10 high 14 celsius. When I arrive at 2:30pm, there is water on the ice and no one is skating, but the dressing room is open. I go in and ask whether there have been any skaters today. One man says he has just finished a 2-hour skate and the ice, except for a small section, is good. Another man asks if I would like to skate. His name is Alex. He is in charge of the rink and has worked 20-years at Harbourfront. He takes the time to tell me a lot about how Harbourfront is run. He tells me that it took several hours of work earlier in the day to make the rink skateable. Alex explains the importance of having drains where excess water can be pushed off. He also says that as the temperature drops, some parts of the ice start to freeze earlier than other parts. When that happens workers push the excess water to the colder parts of the ice where it freezes. In effect they are using the water to flood the ice as the Zamboni would normally do. As he is talking to me, a small group asks if the rink is open. Finding out that it is, they go inside and rent skates.

Alex says that the revenue from skate and locker rentals as well as sales of food from the vending machine more than cover the costs of operating the rink. The rink recently installed some lockers large enough to store hockey equipment and parcels. The larger lockers cost $2 as opposed to the loonie for a regular-sized locker.

Alex says keeping the rink in good shape is important to him. He says, it's partly for selfish reasons. The better the rink is, the more people come. The more people come, the less bored he is. He tells me the employees who supervise the workers who rent out skates are the ones that drive the Zamboni. He says this arrangement gives them a better understanding of what maintaining a rink is all about. When I mention that I was surprised during an earlier visit on a very cold night to find 60 people on the ice, he tells me that's not a lot for his rink. At Harbourfront a good day is 200-300 people on the ice. The Natrel rink can accommodate so many skaters because it's 27,000 square feet. (The rink at City Hall is 17,000 square feet.) Both Harbourfront and City Hall pose challenges because they are below grade level.

4:10pm Low 10, high 15 celsius. Even though it is raining there are 10 skaters on the ice. There is some water on the rink surface but the ice underneath is quite solid.

5:20pm High -12, low -15. Despite the bitter cold and uncomfortable wind, Harbourfront was busy. There were 50-60 people on the ice and another 50 in the dressing room. The skaters were of all ages and backgrounds. The cold didn't stop people from laughing and having a good time. The ice was in good shape. At 7pm, the rink guard asked people to leave the ice so that the Zamboni could clean it. Even though it was freezing, a lot of people were so eager to skate that they were willing to sit on the benches outside and wait for the Zamboni to do its job. Between about 5 and 7pm, a City TV crew was doing a report at the side of the rink. 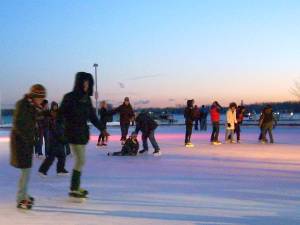 The bitter cold didn't stop people from having fun. 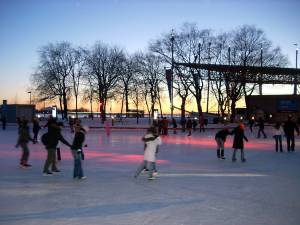 High 3 celsius. Rink looked like it had about an inch or more of ice -- ready to go tomorrow.

High 4 celsius. Sunny day, fair number of skaters, the ice looks good except for one small triangle ringed by cones.