We went this morning. It was a little iffy in the dark, as we didn't have a good sense of the general conditions, but there were skate tracks in the snow from previous days. Snow cover definitely makes it scarier. There was a wet spot near the south end of the pond, and the snow drifts there a bit as well, making skating more difficult. We stayed mostly near the edge but skated all along the pond -- pretty great overall, actually, though the snow makes it a little treacherous! With the warm weather coming I don't know if it will be safe after today. go have some fun before it's too late! 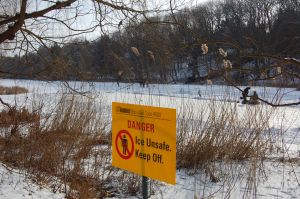 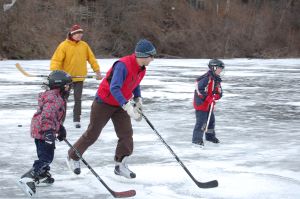 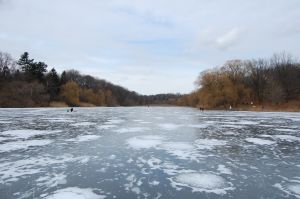 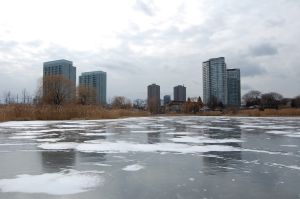 that smooth ice goes on forever

This morning at 10 a.m. I became the first person of the season, as far as I know, to skate on Grenadier Pond. Every year I watch the thermometer, waiting for the conditions to be right. When the temperature drops, and others curse, I cheer, because the pond is freezing up! Just before Christmas the kids and I went to check on it: we stood on the little deck that overlooks the pond, peeled small sheets of ice off the wood planks and skittered them across its frozen surface. It looked frozen. But I put the tip of my boot on the ice at the edge and I plunged through. So we waited.

But with the cold snap we've had since the new year, I had a feeling the pond would be okay. In the quiet still of the morning, having parked by the Colbourne Lodge, I slid down the hill through the woods, dampening the seat of my jeans, to reach the shore. I looked. About 5 cm of powdery snow covers the pond. In the snow I saw dog prints and, more promising, the tracks of a cross-country skier. I laced up my CCMs and took off the skate guards. And I took the plunge.

Ice report: the snow has a tiny crust, and in places the wind has traced ripples on the snow. Under the snow, the ice is a little bit bumpy in parts. The snow is thin enough that I could skate across the pond without shoveling it. However, I'd recommend you take a shovel and clear off a speed-skating oval or, more importantly, a hockey rink. It may be a bit bumpy; even so, it is, as always, Toronto's best skating option..... Grenadier is a sheet of perfect, natural glass. And no tax dollars were spent making it so. So get out there, skate, ignore the city's "Ice Unsafe" signs, and happy new year.