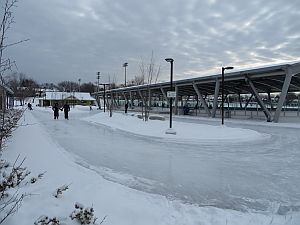 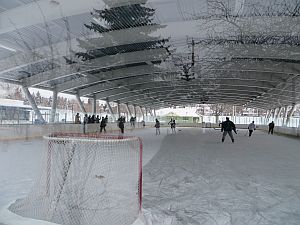 The ice was excellent on both the covered and the uncovered side. Paths were full of unshovelled snow, though. One very young-looking rink guard outside, skating around the path, apparently not concerned about the usual large group of un-helmeted shinny players. Inside, one tired-looking young building attendant, working her cell phone behind the desk. Change room tidy but women's washroom quite messy.

We were excited for the opening of the Greenwood skate trail and rink however we have been there 5 times now and have been disappointed every time with several factors each time.

- The amount of people teaching their children to skate on the trail vs the open area in the trail is crazy. Please people, if you child is learning to stand do not take them around the trail, take them to the small pad in the trail away from the flow of skaters.

- the staff is non-existent, there are usually 3 teens working there, just chatting with each other behind the desk, never anyone on the ice except when the zamboni comes out at least have someone on the ice or the surrounding area to remind people of the to be aware and maybe reprimand bad behaviour

- I dont want to sound like a spoil sport, I love skating but the trail is for recreation not chasing each other down or skating 5 abreast or teaching a toddler to skate, it is too narrow

There still remains the issue of the rink gates not being locked after 11pm. People are still playing hockey after hours and the noise has become so commonplace that police services must know me by now.

My patience has completely run out. If the lights are off at 11pm why can't the gates be locked at the same time?

In addition to the suggestion I made before about posting signage asking players to respect the neighbourhood and detailing what other rinks are open for midnight shinny, how about locking the goalie nets together to discourage late night games? I also understand the city employs a corporate security company to monitor its parks. Is it not possible to increase their patrols of this rink?

The police come when they can, but not always. And even when they do come, it's not as if tickets are issued. Players still come back - especially because an opened gate is basically an open invitation to play.

Other times, out of frustration, I go to the rink myself to beg the players to stop. Sometimes this is effective, sometimes it isn't - but by that point, I'm up, out of bed, and another good night's sleep has been disrupted.

I know I'm not alone with these sentiments. My neighbours have also been feeling great frustration over this. Will you please tell me what will be done to rectify the situation?

thankfully peace has been restored. There was one minor incident on Friday night where the lights were off but the zamboni gate had been left open for some late night players. We called the police and that seemed to rectify things shortly thereafter.

Other than that, we've had no other incidents.

People are making lots of noise in the morning too. Last time was at about 9:30-10:30 a.m on Saturday. Only 3 teenagers but they lined up/slapshot 20 or more pucks over and over and over. At least the full hour that I was there. Ridiculous amount of noise. And...pucks were flying over the glass in the area of young children.

The other problem with the track is that if one skates on the side the blade will go from ice to ground or concrete. I happened to fall but I wasn't paying attention.

Rink neighbours have been made very unhappy -- and sleepless -- by a lot of late-night hockey at Greenwood. As at all rinks, there is an automatic timer that turns the rink lights off at 11 pm, and the rink doors are padlocked shut. However, it appears that some staff or persons who got keys from staff have been returning to play hockey. The lights are turned back on and the doors are unlocked. The slapshots hit the boards and sleep is over for the neighbours. Time for the rink supervisor to lay down the law to his/her staff! 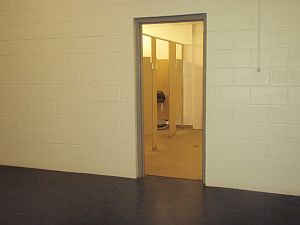 Ice good, lively and well-attended women's shinny game in progress on the hockey rink. The zamboni garage is now totally (and tightly) tarped, presumably with heaters inside. So the glitches are being worked out. A few more to work out: the women's change roomm has a skate-friendly floor right up to the washroom, and then concrete. Just needs a few mats.

An unfortunate oversight of the skating trail design that has been commented on by several friends with young children: there is no easy access to the east-side of the change-building, also cutting off non-skaters to the playground, zamboni snow piles and the occasional FROG campfire (like the one on the opening Saturday). Also, some rink users enter the park via the stairs in the north-east corner near Gerrard.

Now skaters walk over concrete to get in the building, cut through the landscaping that blocks the path or walk on the skating trail. A simple interim solution would be to at least mat the concrete from the east entrance to the trail and replace a few bushes with a wood chip passage for pedestrians and strollers. 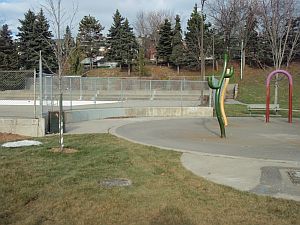 no path toward the playground or east side of park 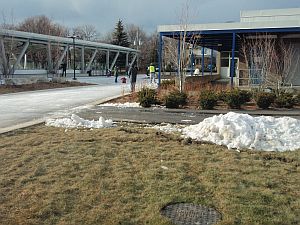 people have to walk through bushes to get to east door

Ice conditions on both the trail and in the rink were terrible to dangerous. Turns out, the only person with a key to the Zamboni phoned in sick.

Greenwood track this morning was a bit thin and rough. On-site Zamboni driver had not shown up by 10:30 although scheduled to arrive at 9:30. Exposed concrete on the sides of the track. Dangerous I think.

1st Wednesday night women's shinny at Greenwood this week. The time slot has moved forward an hour this year. Historically, it's been 8-10pm; now it's 7-9pm. I asked the BA at the opening on Saturday if there is a permit afterwards, but he said he didn't know. There is nothing on the schedule from 9-10pm. Not thrilled about the time change. Enjoyed the later time to play after the kids were in bed. Oh well. Played from 8-9 with a great group of about 16 skaters. The ice hadn't been cleaned, but wasn't bad. The rink guard gave us a "5 minute" warning a little earlier than he should have while a large group of male players were impatiently waiting to get on the ice. He didn't stop a few who stepped on to shoot pucks around. They weren't a permit but expected that we should leave the ice after the women's shinny time slot, since they aren't allowed to play with us. A little education is needed here. 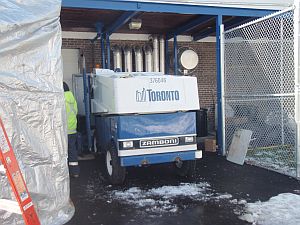 the zamboni has only a chain-link cage, no garage 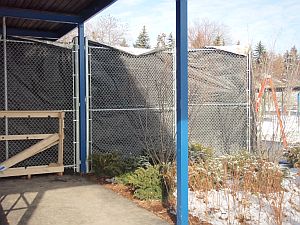 tarps put up to protect the zamboni from the weather

First visit to the completed rink by CELOS rink visitors. It snowed overnight but the rink was unploughed, because the zamboni was in trouble. The staff said it may just have been frozen, since there is no garage -- the zamboni is in a chain-link cage. Staff were on site tacking up tarps to make a kind of tent, with heaters. 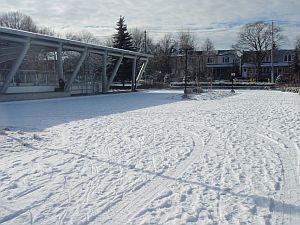 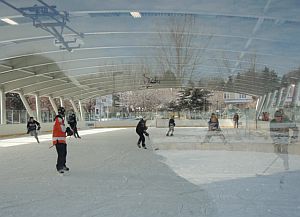 The skating trail was still covered with snow, since the rink has only one manual snow shovel. The hockey pad was not as snowy, since it has the roof, and 11 shinny players had used the hockey nets and the single snow shovel to push the snow to the sides. There was a lively game going on -- and not one helmet among these non-contact shinny players. 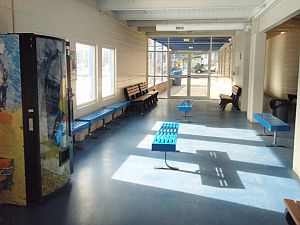 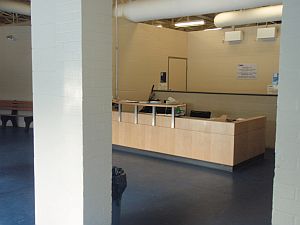 big counter for the staff to sit behind

The indoor change area is very bright and cheerful. It's not built for sociability (no games or children's books for warm-up times), the usual pop vending machine selling bottled water and Gatorade instead of snacks or warming drinks. Staff have a long counter to sit behind, and then there is a small counter with electrical plugs but no sinks. It looks like a diaper-change table but it may have been meant to plug in a coffee machine -- none was in evidence. There is plenty of comfortable seating for skate changing, and the flooring is skate-friendly throughout the building, including additional gender-separated change areas and spacious washrooms. 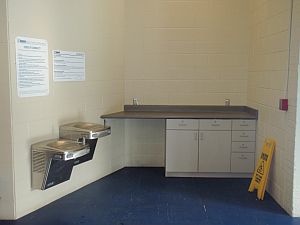 little counter with plugs but no sink 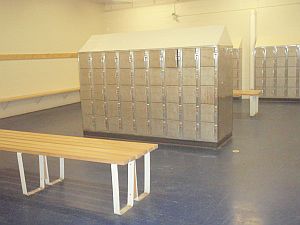 Global news reported on the opening ceremony. So did CBC.

I took these pics Thursday morning and there was ice on the rubber matting, so perhaps they were spraying overnight or early morning. Still pretty thin; bare in spots. Didn't check the hockey side. Plexiglass is in. 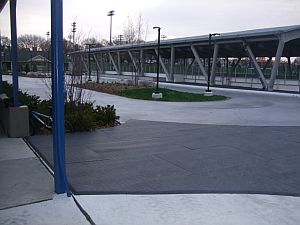 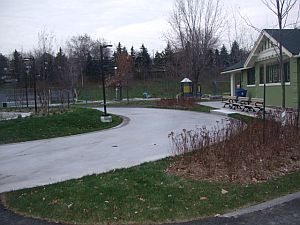 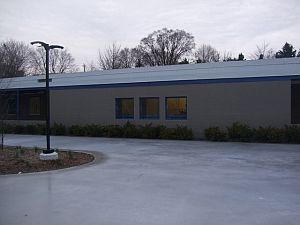 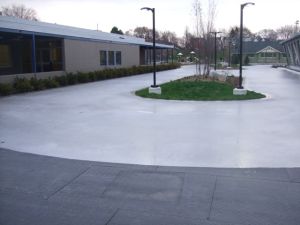 There's a thin layer of ice covering both the trail and the hockey rink. There were two skaters going around the trail, absolutely thrilled with it all. It's so nice not to have the pleasure pad surrounded by fences. Metal posts are now up on the hockey players' boxes, ready for the plexiglass which is leaning against the boards in its packaging. There's an mlse logo on the ice, so I guess some of their money went into the construction. There are lots of benches both in and out of the change house, and a rubber surface to walk to the hockey side on. Could see a bbq ready for Saturday's opening.

I like the open, accessible ice and the connection to the playground and the rest of the park.

Today was our first sight of the new facility. Steam was coming from the condenser and there were a couple of orange-jacket guys on the roof and on the ground. They said they're not going to start making ice until Monday because tomorrow is to be 17 degrees, but that the ice will be ready by the 23rd.

The one big question I have is if they're going to allow shinny at the same time as public skating until they get more glass up on the boards. They put the player's benches on the skating trail side with no glass.

The roof is up. As soon as the pipes are in the concrete slab will be ready to pour. 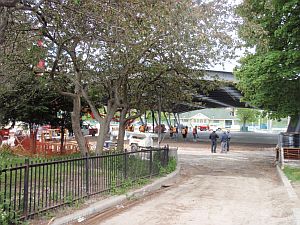 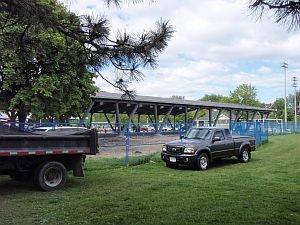 soon the slab can go in

Last year's opening date was postponed to November 2013. Here's the letter from the city councillor explaining why:

A Message from Paula Fletcher

I'm writing to share with you some disappointing news from the Parks Department about the skating rink and new skate track at Greenwood Park. It was due to open this winter, but because of an exceptionally rainy October and many surprises during the excavation of the current rink, construction of the rink has been delayed. The team found old pipes in the ground that needed to be decommissioned and properly removed, and because of the wet weather the construction took longer than expected. The concrete slab must be poured in one day, and requires there be no frost on the ground and above freezing temperatures, which is not possible now. The work on the roof will continue, and should be completed by mid-January.

This is very unfortunate. Like you, I was looking forward to skating in Greenwood Park this winter, but it looks like we will have to wait for next year. Because of this setback, I have asked City staff to extend skating hours at the nearby rinks in Monarch Park and Jimmie Simpson Park and will be posting those hours on my website as soon as they are finalized. You can see all of Toronto's outdoor skating locations and the schedules at http://www.toronto.ca.