9.30 a.m. Greenwood is open. A few hockey players on the shinny side. There's a massive city sign announcing the change room closures and temporary change rooms in the field house, but the relocation hasn't happened yet. The building attendant had everything open as per usual and was busy wiping graffiti off the big sign.

12:30pm: 22 shinny players, 2 pleasure skaters, 5 people inside and 1 staff person. The ice was open with a lively game of shinny going on. No sign of construction on the new changeroom, though the rec staff said he heard it might start soon. He also said that the gas line was broken and the zamboni was out of fuel, and wasn't sure when the ice would be done next. The ice was in decent shape, though frosty.

There were no opening signs, and last year's big metal schedule still posted outside, but the rink staff offered a south district brochure. 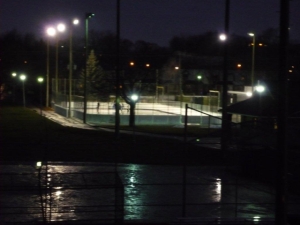 15 shinny players in the rain

5.40 p.m.: There are about 15 intrepid players of varying ages playing shinny in the rain, and one kid on the pleasure-skating side.

From rink user Sally Bliss: Skated at Greenwood for a few hours this aft. Very busy. Nice in the sun. Still no sign of building renos starting.

these cost include professional fees