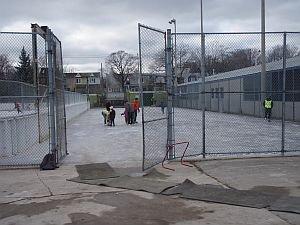 At 11.30 a.m. there's a lively scene around a "Friends of Greenwood Park" ("FROG") campfire beside the rink. The organizers say that more than a hundred people have come to toast marshmallows or drink hot chocolate since the rink opened that morning.

Here are some Pictures and stories from the Friends of Greenwood (FROG).

Women's shinny report: At Greenwood outdoor shinny this Sat AM, some boys came on and gave us a little trouble- I connected with the rink staff staff and a William Coombs , Parks foreperson, gave me his card after intervening on our behalf (told the boys to wait until their turn at noon) and told me to call as soon as it happens next time. We were impressed and felt well treated.

Councillor Paula Fletcher held a meeting about the proposed changes to Greenwood Rink.

I went to play shinny hockey with my six-year-old son and seven-year-old daughter at Greenwood on Thursday, January 20, 2011 as my understanding was that 6-8 -year-old shinny takes place from 4-6 p.m. with an overlap from 5-6 p.m.. At 4:45 PM I inquired to the rink guard if he was planning on rectifying the situation as there were approximately 25 people on the ice and only three were less than eight years old. Most of the children were between 12 and 16 years of age playing a fast-paced game of hockey. The rink guard stated that since most of the children were between 12 and 16 years of age it did not appear reasonable to ask them to leave as there were only three children less than eight years old. I explained to the rink guard that this time was allotted for children eight years and under. I also explained that it was very dangerous for a six and seven-year-old to be on the ice with 16-year-olds going full out. I also noted that my seven-year-old daughter had been unintentionally knocked to the ground by a large child (fortunately just skating backwards). Still, no action was taken. In fact the rink guard stated that there were other rinks that were better suited for younger children. I explained that this was the only rink in Toronto that was available for children under eight years of age on Thursdays. Please assist me with this matter. Could you please forward this message to the rink supervisor as this is a very dangerous situation if it does not get rectified.

Your concern needs follow-up, for sure. I've cc'd three people here -- Paul Stone, the immediate supervisor of the rink staff, Antonio Andrade, the recreation supervisor for that area, and Kelvin Seow, the Recreation manager for Toronto/East York. I know they are quite determined to get the schedules followed properly, and feedback like yours will be helpful for them.

I just talked with a rink user at Monarch Park Rink who told me that the rink staff have been very rigorous in following the schedule over the past two weeks, and that there's been a big improvement. Please let us know if you get a response and if tonight's kids' time is enforced (or whenever you next go to the rink).

In case you find it not being enforced when you go there again with your kids, you could call Kelvin Seow at 416 395-6190 and log that fact on his voice mail.

Of note: I feel quite certain that Kelvin will direct his staff to enlighten the rink guard who felt that Greenwood is not well suited for younger children. It's a very popular rinks for families -- note their website: http://greenwood.parkcommons.ca/wiki/wiki.php

Thank you for bringing this to our attention. We continue to work with our young staff to make sure that they are ensuring safety and following the schedule.

Paul will give you a call to get all the particulars and we'll follow up with the staff.

Please don't hesitate to contact Paul or myself anytime.

Just to let you know I went to Greenwood again today for 8 and under skate between 4:00 and 5:00. Again the majority (approximately 15 players) were at least 15 years old. No staff member was ensuring safety as this is a serious safety concern. These older kids are shooting high slapshots over the net and having high paced games. I ended up moving my kids to the skating pad as it was too dangerous. Please help with this situation in order that kids less than 8 can use the ice during their allotted time and not worry about safety concerns.