"I went to the Greenwood shinny on Saturday from 10am-12noon and we did not get a flood even though there was a zamboni sitting on site (apparently wasn't charged the night before?) AND we had no nets. Funnily enough, the nets arrived in time for Men's shinny time slot just after ours. They were 10 skaters and the ice was anything but safe, there were numerous spots that were uneven and choppy, which caused many skater to repeatedly fall. As the season gets going the numbers will increase substantially, is there any way we could be assured of a flood for our treasured time slot? Nobody wants to get injured as the outdoor season is short enough."

"I supervise 11 of the rinks in Toronto South. Three of the 11 rinks I will have operators on site which Greenwood is one of the three, the remainder 8 will be done by a flying squad. I am currently training new staff and I will have an operator at Greenwood starting on Dec. 20th. I will schedule Greenwood to get a flood this week prior to the 10 a.m. program and you should not have any further issues."

"The ice at Greenwood is looking healthier and much improved since opening day Saturday, however there are still a couple of uneven areas, but over all it's looking very good, I really hope the weather keeps co-operating for you.

However, my email is not about the ice conditions unfortunately, I would like to bring to your attention a serious problem that I sincerely hope does not become habitual for Wednesday Women's shinny time slot for the rest of the winter. A friend and I drove by the rink at shortly after 8 to find that there were approximately 20-30 young men using the ice with 2 or 3 separate groups with pucks on the ice. We waited to go in the facility to put our skates on thinking the operator was just giving them some extra time. We entered the rink at 8:20pm, and I asked Anthony why there were boys on the ice during the women's time slot? Anthony indicated we were the first ones to arrive and offered to clear the ice, I said we can see how it is when we get out there (thinking the boys would give us half the ice or least 1/3 to do our thing). Needless to say, the scene was completely chaotic and unsafe as there were 3 different games going on, one of which dominated the entire ice. My friend and I are experienced hockey players/skaters and by no means beginners, we had no room to skate without getting blindsided or ran into. We expressed our need for some ice as this was our time slot, and we were met with sexist insults and belligerence by approximately a group of 7-10 males. They said since there were only 2 of us and "we can't play hockey anyways" and that we should be the ones to leave the ice.....

It took the staff about 20 minutes to get all the boys to clear the ice and a group of 5-10 males stuck around to berate us the ENTIRE while we were using the ice.....I understand that this rink gets a lot of use in the neighbourhood and an empty sheet of ice should not go to waste, but the women's shinny allotment of 5-1/2 hours per week pales in comparison to the 33.5 hours given weekly to shinny for males 14 and over."

I will follow up with the staff to ensure that the time slot is committed to women's programming.

I'm sorry that this ordeal transpired.

Staff say there's been a great improvement to the facility - same for ice maintenance. The recreation boss has a great reputation around here. In his tenure the rink got repainted inside and outside. Staff say he schedules them fairly, he got new benches for skaters and always has extra schedules (even holiday schedules) for people to take home! Now that is community minded! Best of all for skaters: new mats have been laid down and a new floor inside Greenwood so that the ante-room part of the changeroom area is totally accessible with skates on. Staff are friendly as usual.

Ice looks excellent - as it should, with a Zamboni driver on-site at all times 6-2pm and 2-10pm. Anytime the staff want a flood or scrape they just need to ask. While the driver is very accomodating the zamboni itself is not always so helpful- it breaks down frequently. Staff say it is the worst machine in the city. Apparently the Local 416 zamboni driver reads in another part of the building during the day, when he's not running the machine. A little more thorough shovelling would be great, especially in the path between rinks to the hockey pad.

On Friday the rink shut down with 15 cm of snow but by Saturday at 12pm it was open again on both sides.

At 7 pm the rink was in good condition with lots of people on both sides. The staff said that they've never has ice maintenance as good as this year, and that they even feel confident now about permitting out the rink sometimes, knowing that the ice won't be bad. 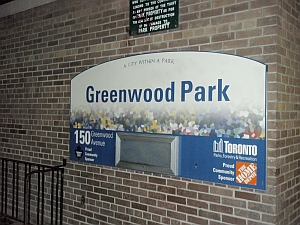 a big new sign as part of the renovation

There were several big signs, "Respect Women's Hockey." This rink has three women's shinny time slots -- Wednesdays 8 to 10, Saturdays 10 am to noon, and Sundays 11 am to noon. The staff said, "it's only fair to the women, to make sure they get to play and don't get bothered." So the struggle earlier in the season must have been worth it.