12:20pm The rink gates are locked and a sign says the rink is closed until further notice. The ice is still covered with the previous night's snow. The Zamboni justed started to remove it when the CELOS researcher arrived. A recreation staffer in the community centre next door says the rink is still open for the season.

report from a 16-year-old skater: I got to Glen Long around 11  11:30am and the entire rink was locked up. I went around back to knock on a door to see if anyone was there and there was staff members at the rink but they were still closed which was totally unnecessary. The Zamboni driver who runs the rink told me that i couldn't just come and play hockey whenever i feel like it, its not a free for all rink (which doesn't make sense cause its a public rink). He told me "you have to pay to play here that's how it works" if you want to play shinny hockey there you have to have a permit unless you come for shinny time which is only 2 hours a week so I asked him if I could just skate and they wouldn't let me so by that point I left.

10:45am The rink is empty and the gates are locked. There is nothing to indicate that the rink is available for public skating. The CELOS researcher knocks on the outside door of the building where the staff office is located. This door isn't marked. However, the CELOS representative knows the staff room is in this building because he has seen staff there on previous visits. Someone visiting the rink for the first time might not know to knock there. A man who turns out to be the rink operator (Zamboni driver) appears. The CELOS researcher says he would like to go skating. The rink operator unlocks the gate and leads the CELOS representative to the women's changeroom. He explains that the men's changeroom is being painted. The door connecting the two changerooms is open and the women's room smells strongly of paint. A radio is playing rock music. The changeroom is spotless as usual, but the rubber mats leading from the change area to the ice haven't been cleared of snow. The CELOS researchers asks the Zamboni driver how long he will be able to skate before a group with a permit takes over the ice. The driver doesn't know for sure. He says he will let the skater know if he has to leave. There is a fair amount of wind-blown snow on the ice which could use a scraping. The snow isn't too much of a problem for a pleasure skater but would make it hard for shinny players to move the puck around. The player's benches and penalty box are still full of snow from the storm earlier this week. The CELOS researcher skates for half an hour before leaving. As he leaves he notes that while the rink gate is unlocked, it is still closed. Someone passing by quickly might think the rink is closed. He also notices that there is now a second worker inside the rink gates.

9:45am The gates are locked and a sign says the rink is closed. A front-end-loader is clearing snow off the ice. The manager of the community centre next door says the rink's policy is to let people onto the ice if there are no permits. Asked if there will be some time available later in the day for public skating, the manager asks another City worker who says today is booked up with permits and scheduled public shinny. He suggests coming back tomorrow when there should be more free time.

At 2.05 pm the rink had just opened, and no one was on the ice yet. The staff room had two zamboni drivers and two rink guards. They said they can;'t open any sooner because there's no city money to run the rinks longer. When asked whether they could let people skate unsupervised, the zamboni driver said, if someone got hurt he himself or the city would be liable. Also if they had unsupervised public shinny, then he'd have to do more maintenance for the permits.

The rink guard said he used to give skating lessons but now there's no money for that.

There were 6 people changing into skates in the changeroom.

1:30-2:45pm Public skating begins at 2pm. At 1:30 the rink gate is locked and no one is on the ice. The changeroom is inside the gate. The staff inside the community centre next to the rink don't know if there will be skating today or not. The rink worker on duty says the rink will open at 2 and directs the CELOS researcher to the lobby of the community centre. There are benches next to the windows where the public can sit. There is also a vending machine. A woman is already waiting with her children for the rink gate to open. She mentions that she has taken her children to other rinks including Ledbury and City Hall. She says the speed of the skaters the City Hall made it hard for her children to skate there. The rink gate is unlocked at 2. The mens changeroom is locked. Men and women use the women's changeroom. The CELOS researcher is the first person on the ice and has the rink to himself for 15 minutes before other skaters as well as the rink guard get on the ice.. The ice is slightly soft but more than good enough for skating. During the 45 minutes that CELOS researcher is on the ice there are between 10 and 15 skaters on the ice at any given moment. The skaters are of different ages. Many of them were also there the previous week. 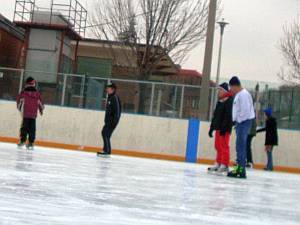 There were 25 skaters on the ice

1-4:30pm At 11:30am a CELOS researcher calls the rink to confirm there will be public skating from 2-4. A recorded message says the manager is on vacation and the caller is directed to leave a message on voicemail.

Some of the signs in the community centre are in Italian. A group of old Italian men are playing cards while another group are playing bocci on an indoor court. A sign (in Italian) says the court is sometimes used by a bocci club. A hand-written sign (in English) says:

Attention Youth Programs will be ending this week; however, they will resume the week of January 7, 2008. Look forward to seeing you. Staff :-)

This is a reference to programs inside the community centre. 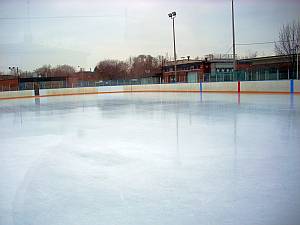 The rink was empty and locked for an hour

At 2pm, the city employee unlocks the gate and directs the CELOS researcher to the womens' changeroom. The separate mens' changeroom stays locked. The rink researcher is the first person on the ice and he is alone for twenty minutes. No rink guard is on the ice even though the city employee said earlier that he couldn't open the rink without a rink guard present. At 2:20 two rink guards are on the ice. More skaters appear and for the next two hours there are 20-25 skaters on the ice. Several are parents with their children. There are eight children skating. The City's helmet policy is strictly enforced. The rink guards tell two young women that the girl they are with has to leave the ice because she is wearing a bicycle helmet. The guards say the girl can borrow a helmet from the staff room, but the women decline. Later a man tells me that when he brought his son to Glen Long for shinny, the boy had to wear a neck guard. The man said this rule wasn't enforced at other outdoor rinks where he and his son have played shinny. The man also said that when he and his son played shinny at the rink, they were the only ones on the ice. He said he takes son to play hockey at different rinks across the city including Dufferin Grove, Wallace-Emerson and Rennie. 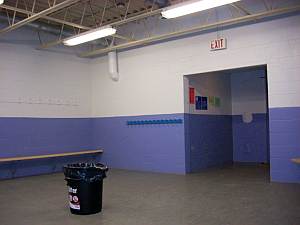 The windowless changeroom was cheerless but clean

At 4pm the rink guard asks the skaters to leave the ice. The driver has taken the Zamboni out of the garage and is waiting to go on the ice. After the Zamboni has finished flooding, it takes a long while for anyone to appear on the ice. At 4:30 there are six people on the ice. Some are playing hockey. At least two are skating without sticks. One of the hockey players isn't wearing a helmet.