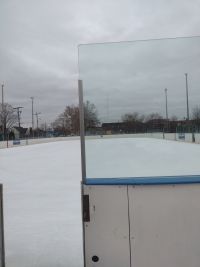 At 11:45am I was on the ice by myself and the staff guy came out to yell at me to get off the ice as I was "not even supposed to be on there" and he could " lose his job." As I was about to leave another gentleman came by and informed the staff he was wrong and that it was in fact shinny time. Staff apologized for having the schedule wrong, scraped the ice with the Zamboni and then allowed us on.

marked as closed for "ice conditions." Temp. is 0 celsius, cloudy

Opened for the season.

The rink is one of two city rinks marked as closed (8 p.m.), again "covered in snow."

This rink has been mostly open since Nov.24, but is marked as closed at 8 pm. (Steady rain all day.)

This rink has been listed as open for more days recently, but since the snowfall of Dec.11, it has been marked as closed: "covered in snow." At 9.30 a.m., it's more than 24 hours since any snow fell, yet the same message is still there.

This rink has been closed more than it's been open, as is the pattern with many North Toronto rinks. At noon, at 4 celsius, sun and cloud, it's the only rink in the city listed as closed for "poor ice conditions."

At 10.30 a.m. the rink was unlocked but empty. Nobody seemed to be around. Since the official opening yesterday, Glen Long Rink has alternated between being listed as open or closed every few hours. Same as its sister rinks in North Toronto, same as every year. 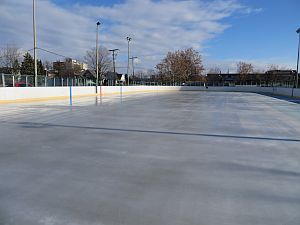 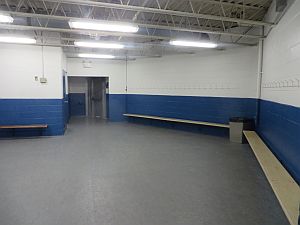 The rink is a big puddle but the compressors are still going. Apparently CIMCO just hasn't come by to shut them down yet. But the staff says they got the order to close for the season last Friday March 11, just like almost all the other rinks did. Nevertheless, the city's website still has the "March 20, weather permitting" closing date for this and three other North York rinks. They're listed as closed under "alerts," as if they might open again anytime. 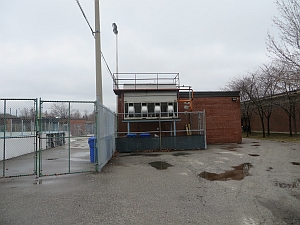 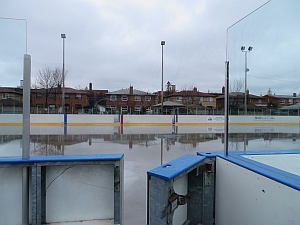 This rink has been closed almost as many days as it was open during this season, part of the North York style of conservative ice management, focused on having the best ice for permit holders. During March, this rink has been listed as closed most of the time, but it's still on the schedule as being open until March 20. 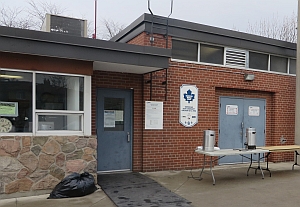 At 2.15 pm the rink had six pleasure-skaters on it. Although it was 9 degrees, the ice looked in good shape. There were two coffee urns on a table nearby, so we thought maybe this meant that they were also planning a social skating time like the one that just finished at Irving Chapley Rink. Tried to find out, but the two staff, presumably rink guards, who were sitting inside the rink office were too involved in a conversation to come out and answer questions.

This rink has been listed as closed a great deal, like a number of other North Toronto rinks, and again today. At 9.30 p.m. it was listed as closed. However, that's wrong. A permit was just going on and the ice looked fine. The players said it was good.

The zamboni driver said he just opened it for the permit. He said they closed it during the day because it had two inches of water on it and "we only close the rink if it's unsafe."

Perhaps they also close it if a permit is coming and they want to protect the ice for the permit. That's a bit like the old days, when the outdoor rinks in North Toronto only opened for permits, stayed closed much of the rest of the time even if a rink operator was sitting in his office by himself, for hours. 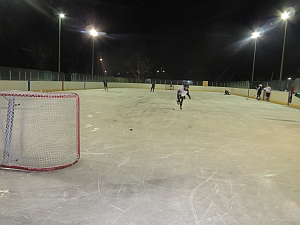 opened for the permit to come on the ice 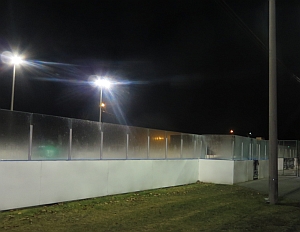 plexi all fogged up from trapped moisture

This rink was scheduled to open today but it has fairly thin ice and is not going to be open (according to the rink operator) until Monday or Tuesday. Apparently they didn't even try to make ice until Friday (yesterday) because of the weather forecast. The rink operator said he would be alone -- no other staff scheduled, so he would not be able to hose the rink because it would be dangerous, However, he could use the zamboni.

The staff at this rink have maintained for years that their compressors are weak.

A problem with the HOLIDAY HOURS: it appears on the city's rink information website/311 that almost all of the city's rinks will have their changerooms/washrooms locked on the three main holidays: Christmas Day, Boxing Day (yes!), and New Year's Day. You can skate on most of the rinks but you can't get your kids out of the cold to change their skates and you can't take them to the washroom. This is true for Glen Long, and even worse: this rink will be closed on two other school holidays: Dec.24 and again on Dec.31.

Is there by chance any appetite for the city to add another time slot for unsupervised/+19 ice hockey? There are currently 3 times available, however, two of the three times conflict with anyone working 9-5pm standard hours, which is quite common for anyone +19.

Is there any possibility of adding a 1 or 2 hour window anytime on Saturday - i.e. 9-11am? I have several friends who live nearby who would definitely make use of the time. We are all 25+.

Cityrinks is NOT a municipal website, we're rink enthusiasts who want the rinks to work as well as they can. That's why we have that banner about us being the "unofficial" site, on every page. So we have no capacity to improve any schedules.

But I have a few suggestions.

1. You are not that far from Giovanni Caboto (St.Clair and Caledonia) , which has 9 hours a week of unsupervised 19+ evening shinny hockey. Another possibility might be Cedarvale (1.5 hours 5 evenings a week plus an hour on Saturday morning). Or if you want to just hop on the Dufferin bus, Wallace Rink at Dufferin and Dupont has 18 hours of 19+ or late-evening all-ages hockey.

So you see there are lots of places to play shinny hockey, free. If you want a game of unsupervised full-equipment hockey, though, you would probably have to get a permit. (Call 311)

2. North Toronto rinks have a history of having far fewer open adult shinny hockey times than the other city rinks further downtown, and than many of the rinks in Etobicoke. A few North Toronto rinks have NO time for 19+ outside of regular working hours. If you want to try and add some evening or weekend times at Glen Long, I suggest you contact the citywide outdoor rink manager, James Dann [email protected] and see if he can help.

Please keep us posted if any of this works for you. 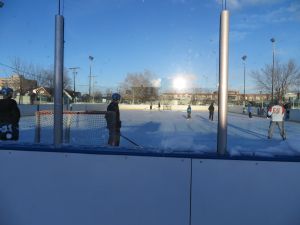 At 11.15 the rink gate was open, but there were no skaters around. The zamboni was putting down water on what looked like thin but skateable ice. There were mats laid out to both the women's and men's change rooms, but only the men's change room was unlocked.

The zamboni driver said that no skaters had showed up yet. He thought it might be because all the schedules said the rink would open on Nov.24. But he said a rink guard was scheduled for 2 pm, at public skating time, and there might be some skaters coming then. 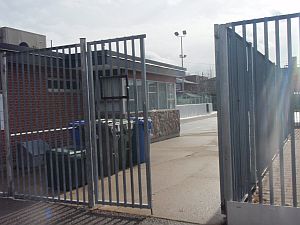 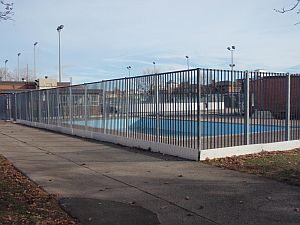 There were signs of ice-making but the front gate was locked as it so often is. Wendy Jang, the year she was rinks supervisor, got some big banner signs made to highlight the rinks. Glen Long had a really big one, stretched across the back fence near the swimming pool. But now there's just empty fence. The on-duty recreation staff agreed that it would be good to post a sign about the rink going to open soon, and said he would make one.

There was a layer of ice on the rink, maybe half an inch, some of it a bit watery, as though the rink was being flooded in the daytime. (It was cold but sunny.) But there was no one around to ask. 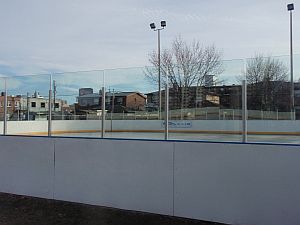 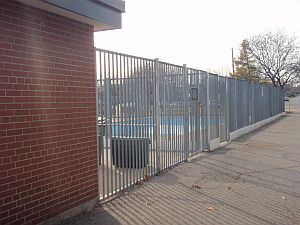 no sign about opening day on the gate either
w 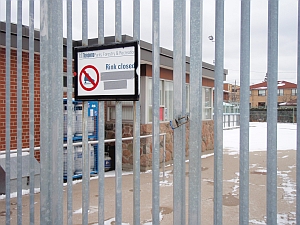 why is Glen Long Rink so often closed?
w

11.55pm: The rink has had some flooding, but the ice made so far looks crunchy and rough. The compressors are on. No staff around and the gates are all locked. The mats and benches are out ready. It's possible they could be ready by the weekend if staff came to flood later in the night, but it was deserted at 12am

The rink schedule sign is up on the wall.

I couldn't get close enough to chat with anyone, but there were a lot of staff for an empty rink! 2 guys in the zamboni garage smoking...perhaps getting ready for a flood, but it they didn't come out while I was there. Plus 2 more staff in the office having a chat. The ice looked very rough and patchy like it had melted and broken up. Compressors were on, but all the public access is still locked up/fenced off.

10.10 a.m.: The rink is locked and there is no sign anywhere. But then I run into the caretaker/rink staff. He says that they've only done hose floods so far -- worried that the zamboni is too heavy and would crack the thin ice. No overnight floods, and maybe not many floods, period. He says that maybe they don't have very much power to freeze ice when it's warm. I say that 100 Hp is good strength for a rink that size.

He doesn't think they'll open this weekend because of the warm weather. 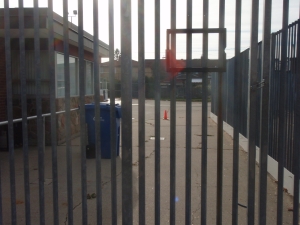 rink locked, no sign telling when it will open 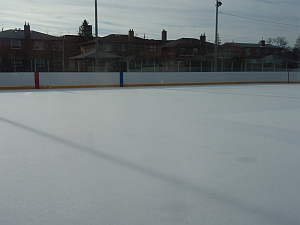 ice looks okay but not clear how thick it is

The city's website listed Glen Long as open for "pleasure-skating only" from yesterday until mid-day today. That usually means there's snow on the rink. But here is an e-mail from Amanda P.: "I am a resident in the Glen Long neighbourhood and actually the rink was open last night. I attended the public skating session from 6-8 p.m. I spoke with maintenance staff asking about the conditions of the ice, and they said they had to close for a little bit but was open for the 4 p.m. shinny hockey program. I swung by today to take my dog for a walk, and despite the frigid temperature, there were a group of people on the ice around 2:30 p.m. Hope this helps!"