10:45 am: A skater said some kids had had a skating party at this rink from 10.45 to noon, and they had the pleasure-skating side to themselves, good ice, and just a couple of kids on the shinny side. 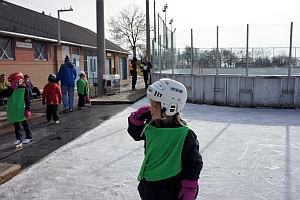 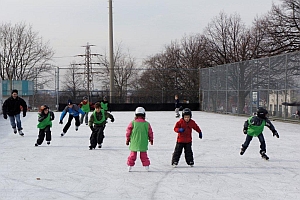 From Rink user PK: Public skate time at this rink ends at 7:30 p.m. and the pleasure skating rink is then unsupervised after 8 p.m. By 8:07 p.m. this evening there were more than a dozen kids playing shinny hockey on the pleasure skating side. Obviously this was quite a well organized group as they had set up the goal posts (at either end of the rink) and broken into teams 7 minutes after the rink became unsupervised. These players had taken over the entire rink! When I mention to them that pucks and sticks were not to be used on this side, there is a designed rink for hockey, several of the youths replied quite frankly to me that they were allowed to use hockey sticks and pucks on this side of the rink after 8 p.m. as it was now unsupervised and that I should get off the ice. I was quite surprised to hear the sureness in their voices, so I downloaded the rink rules. The second line of the rules is "Do not use hockey sticks and pucks on the pleasure side of the rink". How could this very clearly written rule be misunderstood?

A Pleasure skating rink is just that, for pleasure. You should not have to be on the lookout for a stray hockey puck or some hockey player(s) skating around you. This evening there were several parents teaching their young kids to skate. They all felt it was necessary to leave shortly after the shinny hockey began for fear that a puck would hit their child.

My question is, How do we continue to have a pleasure skating side after 8pm?

Snow -- about 4 cm in total. Stairs to front doors shovelled and salted but front doors locked. The zamboni driver opened the rink in the morning and then left to open other rinks. When the afternoon shift showed up, the rink was completely snowed over. No plans to work on it until 8 p.m. (At 5 p.m. it was listed on the city website as "operational.")