Around 6pm, the Shinny nets were out of the hockey pad and no one was on the rink (this might be the hour set aside for ice maintenance). 3 youth were on the pleasure side, trying to play hockey and goofing around. The rink guard was trying to talk to them when we left, and was joined by two other staff. Both rink guards were wearing helmets, as per city policy. One youth who we recognized from Dufferin as a trouble maker in the opening week, admitted that JJP was actually his neighborhood rink.

Rain off and on all day. At 7.45pm the ice was rough and snow was starting to gather. It didn't look wet. Unlike many of the other rinks, there were no skaters or staff inside (although the building was unlocked) or outside. Deserted.

Nice day to skate. At 7ish, there were 8 helmeted skaters with a rink guard on the hockey side and about 6 or 7 people on the pleasure side. 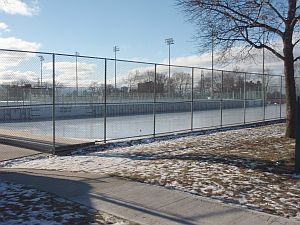 At 10.30 a.m. the rink was unlocked but without anyone inside or out (no staff in evidence either). However the ice was freshly done. There were a few skate marks on the shinny hockey side, but otherwise the place was deserted.

Snow this morning. Almost all the other double pads in the city had been cleared by lunchtime. But at 6 pm, the hockey pad at Giovanni Caboto was still too snowy to skate (it looked like a plough had taken off most of the snow, but there were long snow furrows left on the ice, where the plough had travelled).

The pleasure-skating side was all cleared and resurfaced, though, but there were no skaters on it. On the benches in hallway, two people were changing into skates. The zamboni driver was taking a short break, he said, after he had hand-shovelled a very large area between the rink and the building. Inside the staff room, a rink guard could be seen playing with a puck and a stick, with at least one other person inside. The zamboni driver said the rink guards had not helped with snow-shovelling "because that's not part of their job -- if they hurt themselves, they're not covered."

He said that no rink clearing had started until 2 or 3 pm, when he came on for his shift. He said that as soon as he was finished his break, he'd get on the zamboni and start clearing the rest of the snow off the hockey pad. One big problem, he said, is that all the other rinks have snow removal equipment, but not Giovanni Caboto. [This is true for rinks in the Etobicoke management district, but not at other city rinks -- Ed.]

One piece of good news is that the front door to the change area was unlocked, and the stairs to that door had been shovelled off.

I hope you don't mind that Carleton Village Grade Six class is coming over to skate at your skating rink. Mr. Yamasaki our teacher and he is going to come with us to the skating trip and some of the staff of Dufferin Grove Park. They are going to provide us with a skating helmet and skates. We kindly ask you to give us permission to skate on your skating rink. Please and thank you.

Shinny13-17 yrs old. 9 players on the hockey pad. They were the correct ages. There were 4 other skaters on the pleasure plus one member of staff. The ice was in pretty good condition. (For some reason the zamboni had scraped the pleasure pad ice in an oval shape and left the snow in the middle!) The building was open. There were 4 people changing on the hall benches inside. I didn't see any staff inside, but I didn't go into the staff room.

Waking up to snowfall, I went to JJP at 9am to check out the ice conditions. The building and rink were locked, the ice was snow covered, and there was no sign of any staff. I called Mr. Yamasaki to see if they were up for braving the snow, and he said he was just waiting on the go-ahead from the principal. He had called JJP Rink recreation lead to ask about ice conditions, and was assured that the zamboni would be on the ice at 9:30am to scrape off the snow. We all arrived at the rink at about 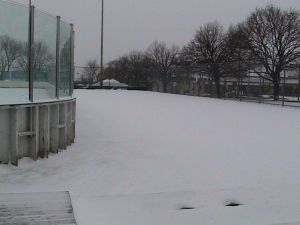 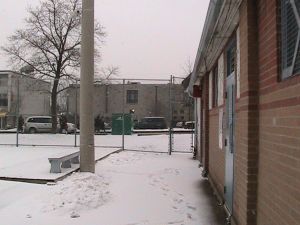 Student Aarriving At The Rink

9:45am, and found the building open, but the ice still covered in snow and no sign of any staff. While the kids started dividing up the loaner skates, helmets and hockey sticks that we brought along, we asked at the front desk in the community centre if there were any rink staff we could contact. The woman working was very friendly, and said that the recreation staff in charge wouldn't be in until 1pm. She called a caretaker, who said he was on his way over. 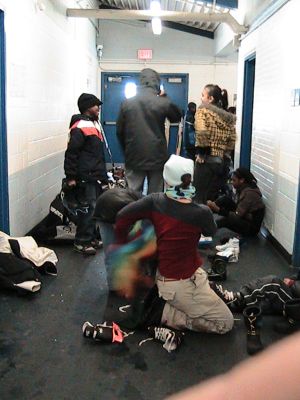 Handing Out Skate loans In The Hallway 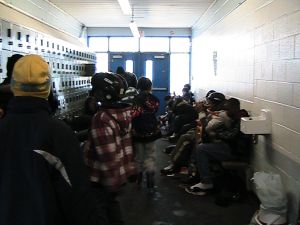 We didn't see him, but I expect he went to double check that all the doors were already unlocked. At around 10am a zamboni operator arrived. He told us he didn't normally work at JJP but was from a flying squad, and couldn't find the key. He seemed at a loss about what to do next, so I asked if he could call his foreperson to locate the key. By about 10:20am he was ready to go, and the students stood ready and waiting in their skates by the rink while he scraped the pleasure pad. 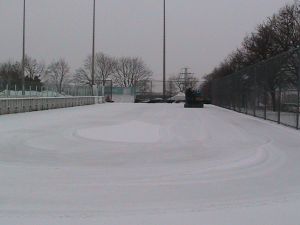 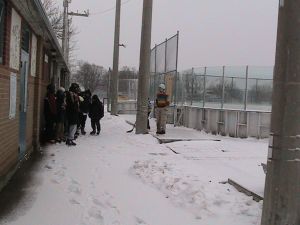 While he worked on the hockey pad we split the pleasure pad in two and started up some shinny how-to. Some of the students were skating for the first time, and used the hockey sticks not only for shinny, but to help them balance as they learned. There are no skate-aids at the rink, though there is a sign to say you can call a central number and reserve one in advance. Many of the students had never played shinny before, and we gave lessons on the difference between a right and left stick, how to pick one that's the right height, and how to pass the puck. Once the hockey side was scraped, a regular old game of shinny got started. The zamboni operator left, probably to head back to the flying squad. We didn't see any recreation staff all day, and none of the snow had been cleared from around the rink.

While most students were busy skating, there was always a handful of people huddled in the hallway by the broken lockers, eating a snack or warming up. By the time 12pm rolled around it was time to change out of skates, eat lunch, and clean up. The students brought out hot chocolate to share, and we contributed some chocolate chip oatmeal cookies. Before we left we had a brain-storming session with the question: What would you change about JJP Rink? Lots of hands shot up: skate rental, a snack bar, more space to sit, places to hang coats, a working pop machine (the existing one ate up someone's money), automatic soap dispensers, clean ice, lockers. Someone asked for mats leading to the rink, and when it was pointed out that there were mats under the snow, they asked for someone to clear the snow. 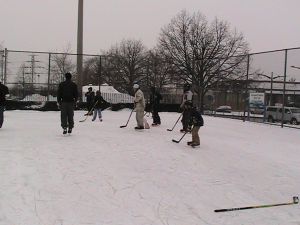 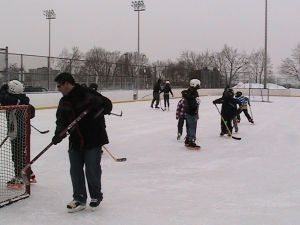 Everything wrapped up at 1pm, the snow had stopped and the school group began their short walk back to school. Mr. Yamasaki plans on following up with his students to see if they're interested in writing a little report on their trip about what worked, what didn't, and what could be improved for next time.