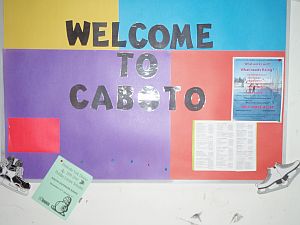 Ombudsman poster on bulletin board

At 4 pm the snow was really coming down, and the rink operator was out on the ice with a small zamboni, going up and down again and again, to take the snow off. He said he'd been going out at least every hour.

One family had brought a big thermos of hot chocolate, and others were looking at them longingly as they shared it amongst themselves -- there was a cold wind along with the snow.

As the zamboni driver was talking about ice maintenance, three different people came up to him and said they'd heard they could rent skates. He said, "not rent -- borrow, but not today." He explained that the rink guards do the fitting, and taking down of phone numbers. But none had been assigned on New Year's Day, and he couldn't lend skates and do the ice maintenance all by himself.

He said that some donours had given them to him, another donour was willign to sharpen them as needed, and that he had lots of people wanting to give even more.

I showed the zamboni driver where I had put the ombudsman poster, up on the bulletin board, and gave him the e-mail for the Parks director saying he wouldn't order these signs removed. He said he'd have to check with his supervisor, since the bulletin board couldn't have just anything put up on it.

There was "caution" tape blocking off the centre 1/3 of stairs to the front door - the left third and right third had been roughly shoveled, the centre third still had snow on it. They obviously had enough staff to clear the steps -- maybe not enough shovels?

4.30pm - zamboni on the ice. no rink guards. Ice is clear but the snow is still coming down. the stair case entry from St.Clair is unshoveled and the doors are locked. Caution tape is up between only the middle stair case. The small side door in the fence is also locked. No signage explaining the closure.

Number samples at 6:30 pm: 9 shinny hockey players, all with helmets, 3 pleasure-skaters, 5 in hallway

Number samples, 8:45pm: the pleasure-skating side had 3 hockey players and 6 pleasure skaters, 2 with helmets. The shinny hockey side had 11 shinny players, 6 with helmets. 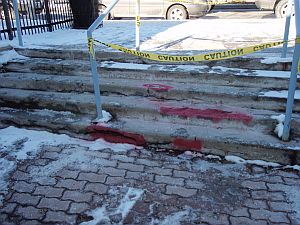 caution tape where the cement is crumbling (painted red) 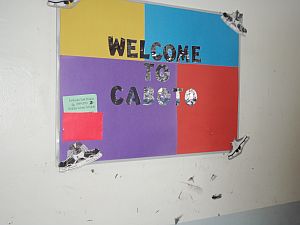 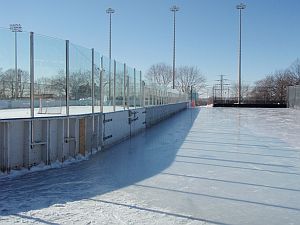 just after noontime, no skaters on the pleasure-skating side

The stairs on the way into the rink have a problem -- the centre third has chunks out of the cement. Somebody has painted the crumbling areas in red.

Inside, at first there's no one in sight (all doors closed). The ombudsman sign that I put on the bulletin board a week ago has been removed.

I asked to see the loaner skates, and the rink guard took me into the staff room to show me. They looked good -- mostly Bauer skates, many looking fairly new, blades sharp, only a few without laces.

Comparison with Wallace Rink, 12 noon: 5 learn-to-skate on shinny hockey side, 25 pleasure-skaters, 26 in clubhouse.

Unsupervised ice, only the zamboni driver is on-site. 2 skaters playing shinny on pleasure-skating side but no one stops them.

Number sample, 8.30 pm: 27 shinny hockey (7 with helmets); 6 on pleasure-skating side (three of them playing hockey), 7 in hallway, Front doors unlocked; knocked at zamboni driver's door but no answer. No other staff.

Comparison with Wallace Rink 8 pm: 26 shinny hockey (4 kids and one adult with helmet); 11 on pleasure skating side; 17 in clubhouse.

When people can play shinny hockey without wearing helmets, those numbers are almost the same as Wallace.

Number sample, 8pm: 11 pleasure-skaters, sticks and pucks on pleasure skating side, unsupervised
Zamboni is cleaning the ice on shinny hockey pad, in boxes are 9 players. Inside: 6 getting ready for for pleasure-skating, 17 waiting for unsupervised shinny, few helmets, doors all open. 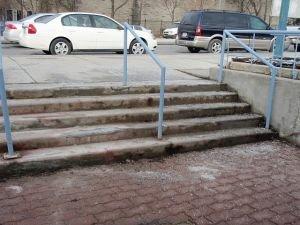 the stairs have been fixed 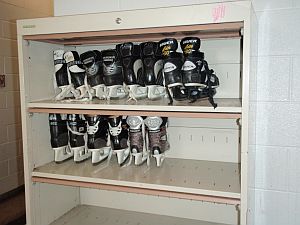 loaner skates in the rec office

At 1.30 pm there were 12 shinny hockey players, all wearing helmets, and one rink guard to watch them. There were three pleasure-skaters and three more people on the bench outside, no one inside. There was also a coordinator in the office and a zamboni driver in his office.

Comparison: at Wallace Rink at the same time there were 13 shinny hockey players (4 with helmets), 18 pleasure skaters, and 9 people inside. There were two rink staff.

The zamboni driver said that they will still lend skates to people, and he let me have a look at them. Many of the skates were on the floor or in a duffel bag, but some were on the shelf of a metal cabinet he had brought. Some skaters are out being sharpened.

The front steps have been mended where the treads were crumbling.

Numbers sample at 1.30 pm: 5 shinny players, all with helmets, and 15 pleasure-skaters.

Numbers sample at 7:30 pm: 8 shinny hockey players (all with helmets), 6 pleasure-skaters, 11 inside.
So far Skates are lent to skaters.

Numbers sample 6:30pm: 2 people kicking around puck on pleasure side looks like ice hasn't been done at least all day, we were told that the zamboni operator was trying to clear off water with a hose, 4 people inside

Lots of staff around - a rink coordinator, a rink guard (or maybe two?) and the zamboni operator.