You are on the [Rink Diary] page of folder [Giovanni Caboto / Earlscourt / J.J.P. Rink]

The city's skate lending pop-up is scheduled to be at this rink today.

opened for the season

Since Jan.3, Giovanni Caboto was listed as having a service alert, no additional information. The notice was finally removed this afternoon.

It snowed last night and at 2 pm this rink still shows a service alert. All other city rinks not under construction are listed as open.

Although the sign posted on the rink fence says the construction work will finish in November, it looks like there's still lots of work to do. 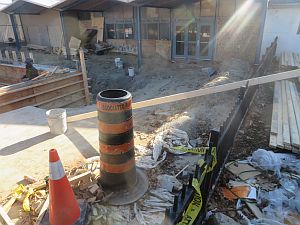 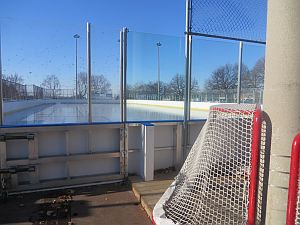 At 11.30 a.m., some city staff making a delivery were knocking on the locked changeroom doors. Eventually the door was opened for them. The rink schedule says that this rink is unsupervised until 4 p.m. -- but does that mean there's no access to the change area either, nor the washrooms?

Our reasons:
* people love to borrow skates: newcomers, school classes, kids and youth who grew out of their skates
* we have 110 pairs of skates, 20 hockey sticks, 20 helmets to donate
* this kind of program has been done by city staff for 12 years at Dufferin Rink, 9 years at Wallace and Campbell -- lots of experienced staff, each one teach one
* staff often have time on their hands to lend skates and also to maintain skates
* the city has insurance that can cover this (the city is self-insured under $5 million anyway), but skate lending programs are rarely threatened with a claim if they do responsible skate maintenance.

In September 2016, the city awarded a design contract for Professional and Architectural and Engineering Services, for the Outdoor Pool and Artificial Ice Rink, to Peter T. Mitches & Associates Ltd., for $127,000.00 (not including HST). 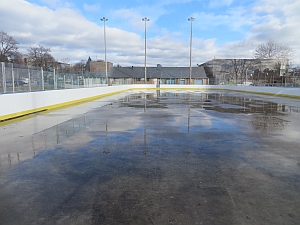 The ice surface looks freshly hosed at 1 p.m. but none of the water is frozen -- maybe their compressors have not been turned on yet? Or perhaps the hosing was very recent, with hot water.

This rink was scheduled to stay open until March 20, but was shut down for the season on March 11.

The rink was closed down on Dec.24 and not reopened until late Dec.26. 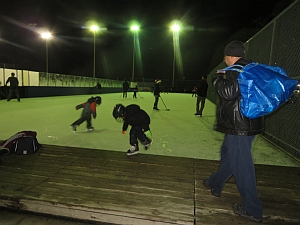 shinny hockey on the pleasure-skating pad

The rink was open, ice looked fine on both pads, shinny hockey on both sides, with a few pleasure-skaters on the north pad. The zamboni driver staff said the rink is unsupervised, and since that means no rink guards, people can play shinny where they want. No rink guards doesn't mean no staff -- the zamboni driver is there full time, but working with the public is not his job. So this rink functions a bit like the tennis-court rinks after hours -- and the scene looked pretty nice. The zamboni driver was shooting the breeze inside the change area, with three guys who were just putting on their skates. All of them were talking about the boards that had been donated by Canadian Tire -- that they were shoddy and partly propped up.

The zamboni driver said the ice had been very good all day and for many days, but that when the temperature goes back up to 15, they would lose the ice and it would take them three days to get back.

Who knows, he might be right. Today was only 14. 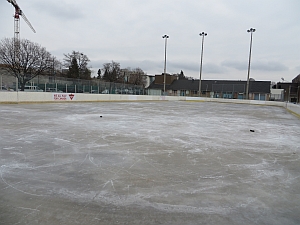 thin ice but it opened on Nov.29

The rink did open, although with very thin ice. By mid-afternoon of Sunday the 30th, the temperature was 14 celsius (although with thick cloud), and the hockey side was shut down.

A rink user posted these two pictures from noon to-day. Ever since this rink was lumped in with the Etobicoke rink management, it's been behind in opening. An orphan, how sad. All the rinks are supposed to open tomorrow, and tonight the forecast is for snow -- it will stick to the cement like glue. 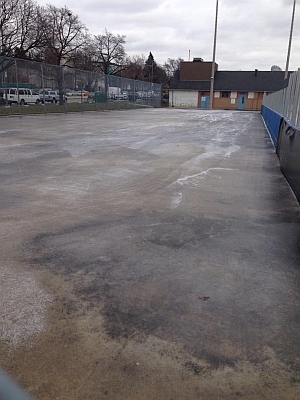 one layer of ice, two at most, plus cement 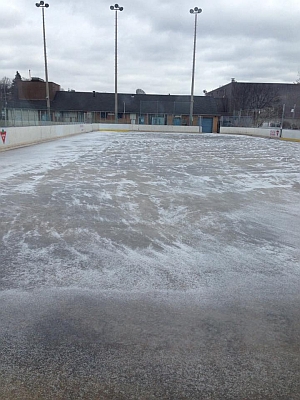 how can this rink open with so little ice?

Sunday afternoon at 4.45 -- a happy-looking bunch of pleasure-skaters, since the rink was re-opened and the season extended. Very quiet on the shinny side with a few kids and young teens. Most youth shinny players at this rink wait until the evening, when they can play shinny without helmets. 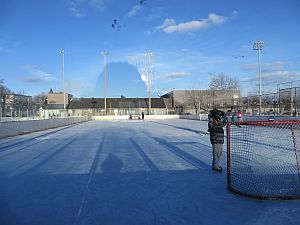 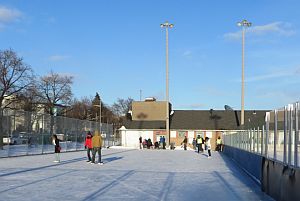 lively pleasure-skaters, but not many

At noon the rink had been cleaned of snow and the ice looked good. There were two shinny players, one with a helmet, the other without. The front doors were unlocked and the inside hallway was immaculate. However the stairway leading to the front doors from the street had not been cleaned of snow. There may still be a jurisdictional dispute -- whose responsibility is it to clean the walkway? For years this problem was solved by simply leaving the front doors locked and making skaters come in the side gate to the inside rink doors. Happily, the front doors are now unlocked. There was no staff in sight, for the CELOS visitor to ask about what plans may exist for clearing snow off the stairs to the front doors. It might be a good idea in the interim for the CELOS rink visitors to include a kit in their cars when they visit rinks -- a small snow shovel and a broom. 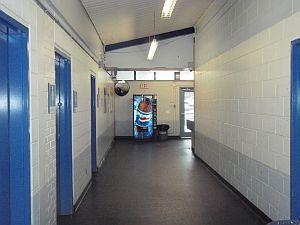 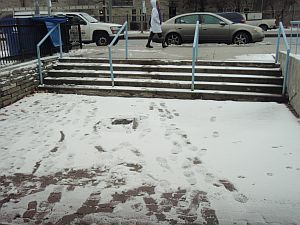 snow not cleared off the entryway stairs 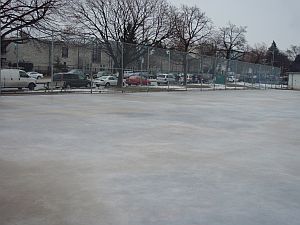 thin ice but ready to use

Even though the city's website has listed this rink as closed all day, by 9.40 a.m. there was one hockey player on the ice, and by 10.30 there was a whole group of parent-and-child shinny players. They said the ice was thin but definitely skateable. The front door leading to the change hallway was unlocked and so were the side gate and the back door. But at 2 pm, 311 was still reporting the rink as closed, and at 10 pm, the "closed" message was still up on the city's website.

10 a.m.: The rink was empty and the doors locked. Both rinks looked like they did indeed have ice. There was a loud hum from the compressor room, suggesting that it was in fact on. The city website lists it as closed, even though it might have been possible to skate on it. 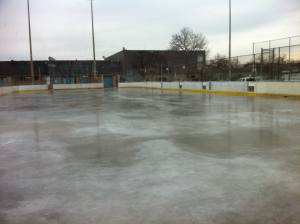 hockey pad with ice, a bit bumpy but skatable 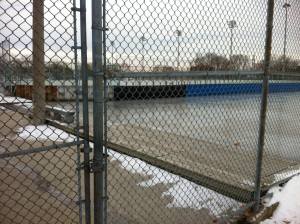 locked rink gate, no staff around 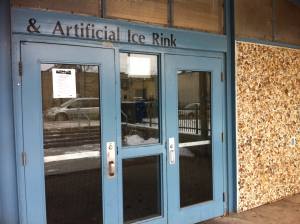 locked front door, no opening day or even a closed today sign

There were patches in the middle that looked crunchy, but the pedestrian gate to the rink was also closed so we couldn't take a closer look. No sighting of staff although there might have been one person leaving the hockey pad on skates as we arrived.

A rink user reports seeing ice-making at the rink at 7 pm, even though the city website still lists it as out of order. 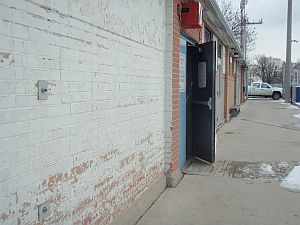 The rink is not making ice. The compressor room door was open and that means somebody must have been working in there, but there was no Cimco truck or any other sign of intensive work being done. The answer is usually the same: compressor trouble. But what kind of trouble, or why it was only discovered a few days before the rink season began, is not revealed. 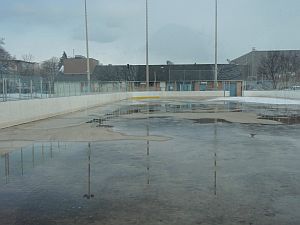 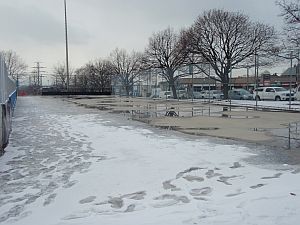