You are on the [Rink Diary] page of folder [Fairmount Park] 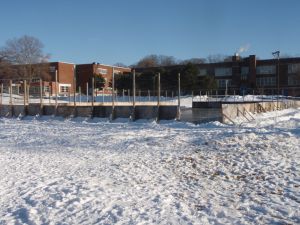 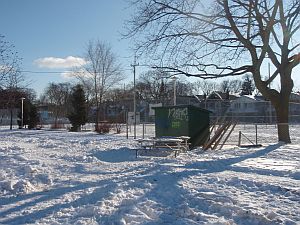 city shack and one picnic table 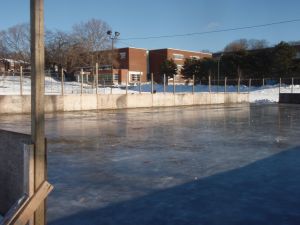 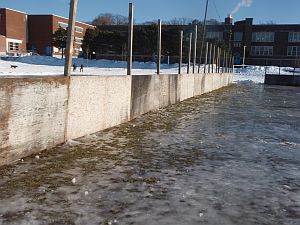 grass on south-facing side 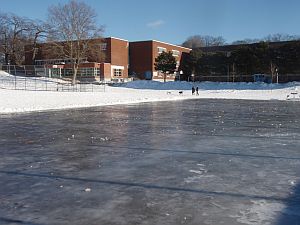 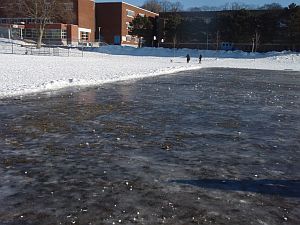 grass on uphill side

Planning for the 2013 Winterfest (Saturday February 2) is underway so mark your calendars.

Whats Winterfest you say? Button up that natty cardigan that Santa brought you and settle in for a tale.

For over 60 winters, Fairmount Park in East Toronto has maintained two natural ice rinks  a hockey rink and pleasure rink. Originally, these rinks were maintained and operated by the City of Toronto but twenty years ago a group of committed volunteers, The Fairmount Park Ice Masters, took over the responsibility for the rinks. The City still puts up the lights and provides the boards [editor's bolding], but its the Ice Masters who are out there seven nights a week, shovelling the snow, scraping the ice, and flooding. Membership in the Ice Masters has grown from just a few guys twenty years ago, to over fifty strong today. As our numbers have grown, so has our community spirit and our ambition.

In 2010, we held our first Fairmount Park Winterfest and hundreds of friends and neighbours came out to play shinny hockey and curling, listen to live music, enjoy a hot dog and a cup of cocoa with members of the Toronto Police and Toronto Fire Services, participate in a free skate exchange, or go tobogganing  that year there was no snow so Ice Masters trucked in 20+ pick-ups full of Zamboni snow from the back of Ted Reeve arena to make a toboggan run.

In 2011, attendance at the Winterfest exploded to over 500 and last year it grew further still. The event is free, with the exception of the food / drink which is sold at or below cost (e.g. $1 per hot dog / $1 per drink)  the cost of the event is covered by raffle ticket sales.

The city provides the boards, in that they drop the plywood and brackets at the park. The volunteers assemble (and disassemble them). The city installs the lights.

We think we have already had more skate-able days then in 2012, so we remain ever optimistic......

The north ends of both rinks are crunchy, if not grassy. However, we continue to have skaters on the south end of both rinks.

It was rewarding to see a number of families out on the rink in the days after Christmas trying out new skates. I haven't seen a full shinny game yet but once the temperature drops and we can get some more water down, I expect that too will happen.

Drop by for Winterfest on February 2 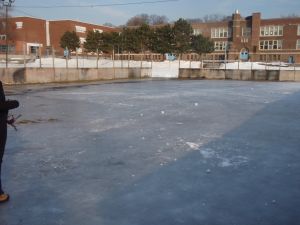 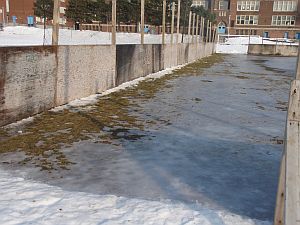 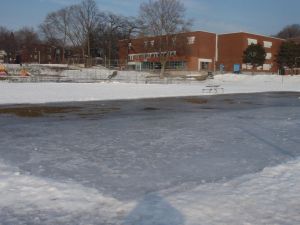 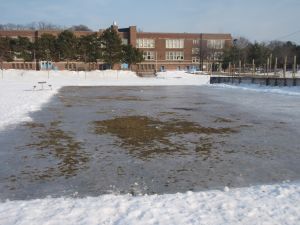 Please let your captain know if you can make either a 7 or 11 pm shift (times may be adjusted slightly) on your designated night. If you don't have a set night and can make a shift please let me know.

Also, we'd like to do 6 AM floods on Monday, Tuesday and Wednesday, so if you can make one of these please let me know.

It would be great to the ice in shape before February 2nd for Winterfest!

Barry & Brent have re-installed some braces for the boards. As the ice begins to build up and stabilize the boards, these will be removed.

When you are flooding the pleasure rink, be sure to soak the outside braces for the hockey boards as ice covering the braces will help stabilize the north boards.

The hoses were frozen in the lock-up this morning. It looks like the strategy of hanging the hoses up over the pipe just enabled any water that was in the hose to freeze into a block at the lowest point of the hose. We draped the hoses we used this am over the heater, hoping that they will keep from freezing in that way.

I will take the braces down during the day today in preparation for this evening's flood.

We have a lot of folks from the regular Tuesday night crew coming out at 10 this evening, but we could use 1 or 2 more folks for 7:00 pm.

Rinks are shaping up nicely - we had some skaters on the rink Tuesday evening.

Two things: 1. Rod has taken some of the hoses into the community centre to thaw. They should come back into the lock up by Wednesday evening.

2. The key for the shed and lock up will now also unlock the hockey nets. The nets should continue to be locked up overnight.

The ice is beautiful! I was out enjoying the fruit of some hard labour last night with the kids, and we were joined by a few other skaters.

The pleasure rink is really nice all around as usual, and the (almost) NHL size hockey rink is also quite nice, with only a few bumps approaching the north boards.

The hockey nets are quite heavy to carry with just one person... so we locked them up to the picnic table rather than the fence near the shed.

Ladies & Gentelmen  This Saturday is the Fairmount Park Winterfest. Perhaps youre thinking that Mother Nature is delivering another of her cruel jokes, with rising temperatures and rain. But friends, Mother Nature and the Ice Masters have an understanding. What appears to others to be impending disaster is just another Ice Master miracle in the making, the likes of which will inspire folk songs for generations to come. Years from now, as the children pass in front of McCarthys they will say, Maeve, please tell us again about the year that Winterfest almost didnt come! Please! Oh all right, children. Tut tut

The rain and misery are forecasted to peak on Wednesday. And then just when all hope seems to be lost, the magic will begin and temperatures will plummet. The rinks that had turned to soup with freeze into perfect sheets of glass. Crew after determined crew of Ice Masters will work tirelessly through the nights on Thursday and Friday so that children will wake on Saturday morning to see a groomed sledding hill painting a white path to two ice rinks with a sparkle that would make Daniel Swarovski weep.

So, YES, Winterfest is coming. How can you get involved? Many of you have already been conscripted to help with the snow collection for the sled hill (no, not kidding), hot dog cooking, shinny playing, raffle prize collection, Smartie counting, music making, etc. but many hands make light work so if youre interested, please get in touch with one of the leaders below.

We also need help getting the word out. Bowmore is including a promo in their email blast to parents, and Ray is getting a sign for Gerrard. Beyond that we need an army of volunteers to print and post these flyers (attached) around the neighbourhood. Storefronts, hydro poles, stray dogs...

Thanks to all of you for helping to make this a great event for the community. See you Saturday!

O.K. Winterfest sign is up - ice is still mostly covering the grass in both rinks - temperature dropping Thursday and the ongoing forecast is below freezing - this may work

Barry blew a pin on the Snow-Blower tonight.

Pleasure-Rink is clear (we had skaters) - and Hockey-Rink is 1/3rd clear.

Plan is to clear the rest of the Hockey-Rink at 8 AM Saturday. 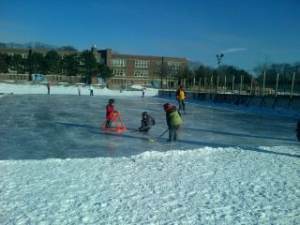 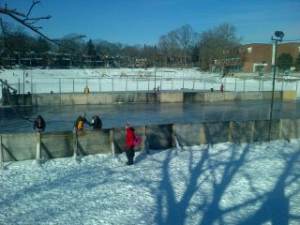 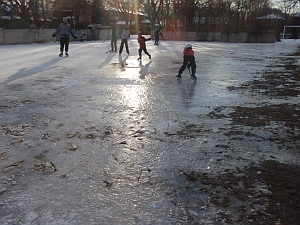 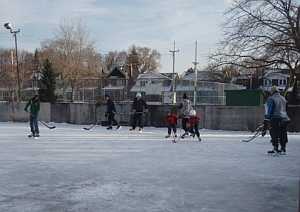 ...but there's a shinny hockey game 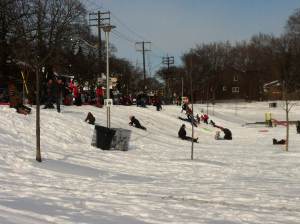 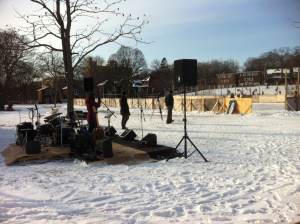 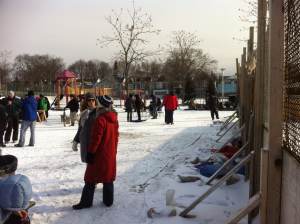 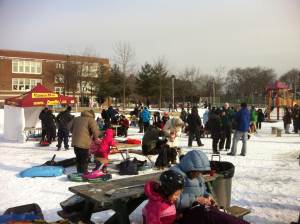