Cold, sunny day. Lots of people at rink, and walking around the park looking at the sun glistening in the ice. Still 91,000 people in the city without power on Christmas Eve! 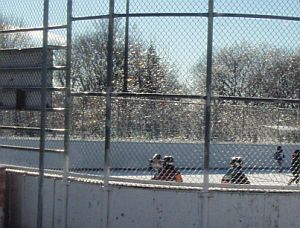 all around the rink, trees glistening with ice 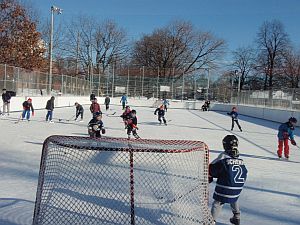 The park was coated with ice, as was every other place in the city: ice storm. In the morning the rink limped along with very few skaters and no road salt left to salt the walkways. By later afternoon people had kind of gotten desperate, or readjusted their "normal," because the rink house filled up and there were quite a few skate rentals. Many parts of the city were without heat or light, but this luckier neighbourhood never lost power. 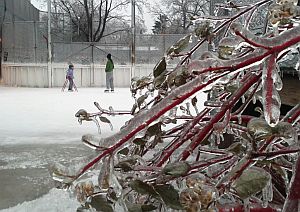 trees beside the rink bent over with ice 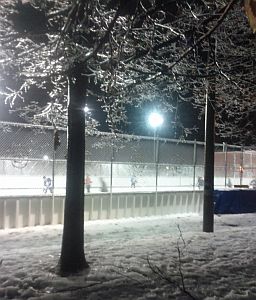 8 pm: trees still iced up beside the shinny game

At noon the plough had been there but no zamboni. The rink was skateable anyway. 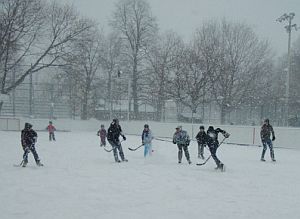 Lots of snow. The zamboni came on twice as often as usual, and each time the kids tried to play shinny right afterwards. The snow piled up so fast that the kids were only allowed to use an orange ball (a lost puck that gets sucked up in the augur can mean a four-day stay in the shop for the zamboni). There were also families who came to skate on the leisure-skating pad. The temperature never got above 10 celsius, so the snow was fluffy and light, and people were able to skate through it.

At 1 pm,. a "story mob" arrived -- a whole bunch of kids ready to perform "Green Eggs and Ham" by Doctor Seuss. They had intended to perform the story outside by the rink-side campfire, but it was too windy to have a fire so the kids all stayed inside. Despite the stormy weather, at least 50 families came to act out the story, drink hot chocolate, and go skating or tobogganing. A remarkable day. Afterwards, the organizers of the story mob sent some pictures.

Tonight there was an incident among a group of youth, some black, some white, with an older dad getting involved too. There was some trouble with the dad last year where he was seen shoving other young kids on the ice during the 12-and-under time - he seemed to feel that the other kids got in his kid's way.

This evening, the youth started making trouble with each other, name-calling ("Q: why are you looking at my friend like that? A: I don't like the way he looks) - and threatening (both parties saying to each other: "you guys are losers" - "you wait we'll get our friends and come back and get you"). A girl decided to video the youth of the other side using her cell phone. That really raised the stakes. One of the youth slapped her phone out of her hand and tried to step on it. Then a big tussle began, during which the girl got pushed around and her hand got stepped on.

None of the staff or volunteers had taken enough notice during the early part of this trouble, the taunting and so on. If they had, a lot of it might have been avoided. But this was just at the end of the farmers' market and there were so many other people going in and out of the rink. When the older dad saw the girl being called names by the other youth, he jumped in and manhandled the youth saying he was stopping abuse from happening. The all of a sudden the whole front hall was full of pushing, jostling people, bread baskets and leftover bread (still from the market) flying around, parents with their kids standing wide-eyed at the sidelines.

The police were called, but by the time they got there, the black youth has left. The police consider the black youth suspects in an assault, and dangerous. However, the youth, none of them older than maybe 15, have been coming to the rink from time to time and have never caused a problem before. A lot could have been avoided if all three parties didn't egg each other on so much, and if staff had worked on diffusing the situation rather than allowing it to escalate. 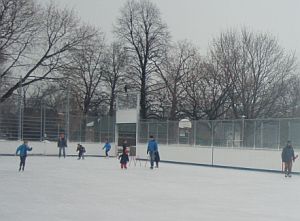 This was the second Sunday that the rink is open. It rained off and on, so not many people came in the middle of the day. There were not enough staff to run the zamboni cafe so it was shut down.

After we sent Technical Services last week's photo in front of the closed gate, they located another box and chain, and put it on a day later. Problem solved, the lift gate was up and people could skate in the round.

The rink has been terribly crowded this week because it was one of the few that was open. That's a bit hard on everybody, skaters and staff alike. So this coming week should be more reasonable. 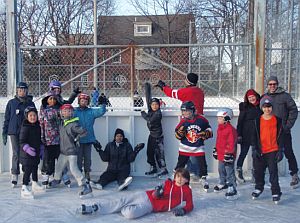 please, we need a chain to raise the lift gate!

The rink was crowded with skaters despite the first really cold weather. On Sundays it all pleasure-skating; hockey is banned. But only one of the lift gates can be raised. The other one had the chain taken away about a month ago and it's still not back. So instead of being able to skate in the round, skaters had to do a lopsided figure-eight, back and forth through only the west lift gate. We took a picture to send to the tech services people. Bt the novelty of skating outdoors again made lots of fun anyway.

We found out today that Dufferin Rink probably didn't get any ice maintenance on Friday night. So it also had only three days to get the ice ready, yet it has well over an inch. The only difference between Dufferin and the other rinks was night flooding.

The rink opened and the skaters came, the chili was set out, the skate loans started -- and the snow squalls came, the first of the season, over and over. The zamboni would no sooner clear off one squall than the blue sky would change to gray and the snow would begin again. But that also meant some zamboni snow piles outside the rink -- snow piles already surrounded by little kids, making snowballs.

Answering the phone on opening day is fun. The question is always the same, slightly hesitant: "are you open?" And the answer is, "sure we are!" The reaction on the other end of the line is highly gratifying, even if it's just an exclamation of joy and a click, as the skater hurries out the door. 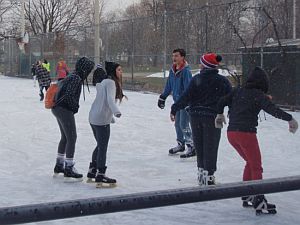 the kids are back 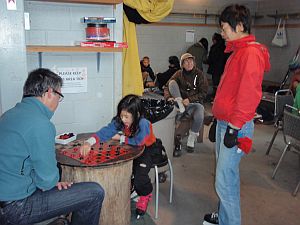 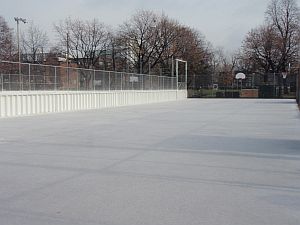 Good ice, nice and thick (2mm of rain last night will have added a bit). One lift gate still not working because the chain was removed by staff and not returned.

For the first time in years, the ice maintenance staff put out the rubber mats along the walkways. Nice! Normally it would have been the recreation staff who were left to do that. But: the recreation staff wanted to take the remaining mats to lay them out in front of the building where skaters smoke and use the pay phone. But the ice maintenance staff said they couldn't hand over those mats without approval from their supervisor. Apparently, once again, the Parks staff and the Rec staff have been explicitly told that they are not on the same team and should not work together directly -- they must go through their supervisors on even the most commonsense matters.

12.30: Both the area Parks supervisor and the Recreation supervisor came to the rink and unlocked the door and let the Rec program staff take out the mats so they could finish the setup for tomorrow. High-level problem-solving, but with a dicey prognosis for the rink season.

The ice was much thicker and stayed solid all day. It has a lots of little bits and pieces embedded in it -- a cigarette butt, leaves, some white paint chips, also some blue paint and some red paint near the markings on the boards, a shoelace, some buttons -- all treasures to be slowly unfrozen at the end of the season. But for now the ice already looks skateable in many places. Thursday is farmers' market day, so there were lots of little kids skidding around on the ice in shoes while their mothers bought food. Note to the safety police: nobody got hurt, they just had fun and got a lot of good exercise. 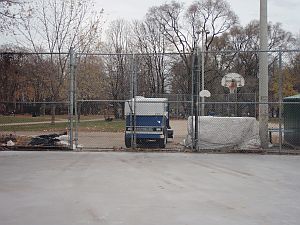 the zamboni waits at the gate 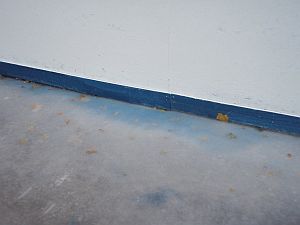 blue paint in the ice

Sunny and cold (high of 4). Ice is in from overnight floods. The painters are here again, to put on a second coat of while. Lots of paint on the ice next to the boards. 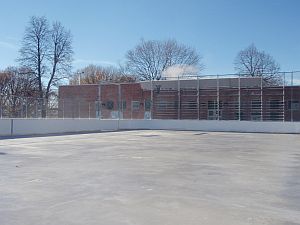 good sheet of ice in 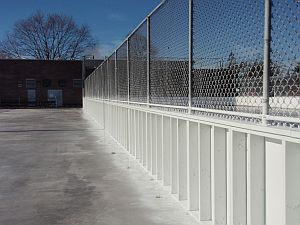 11.30 a.m.: Most of the leaves were hosed off sometime early this morning, and the shinny hockey side must have had some water put down before 9 a.m. The main event is the painters -- they are at the rink, painting the centre boards with their spray machine, scooting over the hockey ice to do touch-ups on that side. They said they'll have to paint tomorrow as well. So the ice will be a little whiter this year than normal. 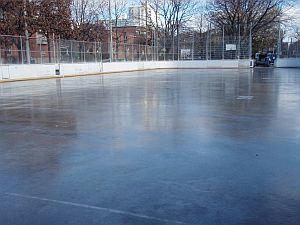 hockey side got flooded this morning 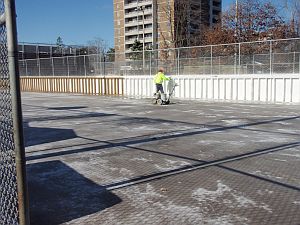 painters are here, doing the boards 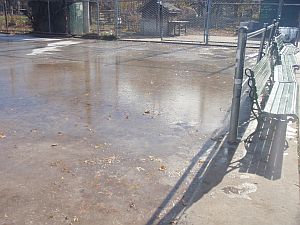 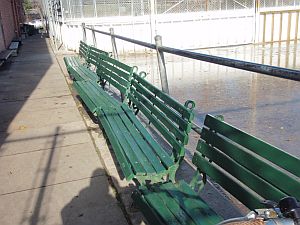 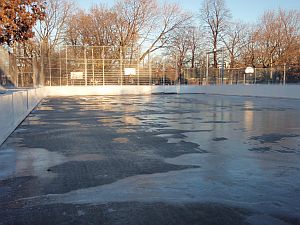 ice was too thin and so it melted off in sunlight

3.30 pm A good deal of the ice that was put down early in the morning has given way to cement. First floods really need to be put down in the dark, with enough layers that they can withstand even the slight sun on a chilly day. Hopefully the ice maintenance crew will come this evening after dark and get started properly. 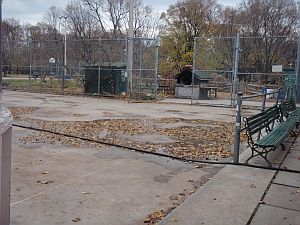 The compressors were turned on this morning. The rink was cleaned on Friday, but at 10.30 a.m., because of the big windstorm last night, there are plenty of leaves on the southwest section of the pleasure-skating pad. Four rink staff are wrestling with the big black hoses, trying to put them together at the joints.

Indoors, Anna Galati was matching up the last bagfuls of skates for the skate lending programs at the three Ward 18 rinks.

The rink maintenance staff hosed off the leaves and then left for the day. But by 3.30 the wind had blow a whole bunch of leaves back on again -- the hose puddles catch even more leaves. The problem is that there are lots of leaves that need to be blown off right outside the rink fence, but they have been left there, to blow back inside. 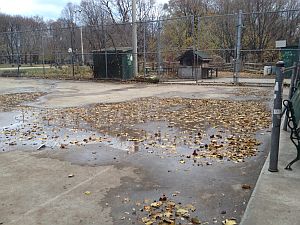 The longer-term problem is that if leaves freeze onto to the concrete slab and are covered with ice, then as soon as the sun gets a little stronger in late winter, each leaf becomes a melt point on sunny days -- and that makes the ice pocked in a very unpleasant (and unsafe) way. Hopefully the rink maintenance staff will be able to get all the leaves off the concrete slab tomorrow before any ice is laid down.

11 pm: all the leaves are frozen solid onto the slab.