You are on the [RinkClubhouseConversion] page of folder [Dufferin Rink]

The Dufferin Grove rink house, completely rebuilt in 1993, had too many walls and not enough windows. During rink season, it was impossible for the rink staff to keep an eye on whatever foolishness might be going on in the separate, walled-off change rooms. Parents couldnt stay warm and watch their kids out on the ice at the same time  there were no eye-level windows to the outside. (All the windows started three meters up.) The retired Italian construction workers, who had begun to use the rink house every day to play cards, were jammed in by the wall in the boys change room. When then-mayor Barbara Hall came to give her "bake oven opening" speech in October 1995, she had to stand in the hall.

I asked Tino, our new recreation supervisor, how can we get rid of some of these walls and make a more usable room? He said, talk to the director. I called Mario Zanetti, and he sent out a building inspector.

We showed the building inspector the two concrete-block walls we wanted to be taken out, to make one big, flexible-use room. We asked him  if these walls are removed, will the building fall down? He showed us the big steel beams holding up the roof. The interior walls were not bearing walls. They wouldnt be hard to remove, he said, but it would be expensive. He estimated that for the City to remove the smaller wall that blocked the staffs view into the girls change room (about ten feet long) would cost $6000. The bigger wall, separating the two change rooms, would cost about $10,000. I can see that it would be a good idea, he said. But youd better get busy fundraising.

We didnt want to use our time to have bake sales; we wanted to work with families, to get them back into the rink, dilute the youth ghetto, mix it up, bring all sorts of people together. We had a key to the building, and wed tried to make it as nice as we could, but it was not a pleasant space to be in. Everybody told us  great idea, a clubhouse with one big community room  but taking walls out will cost money that the City doesnt have. 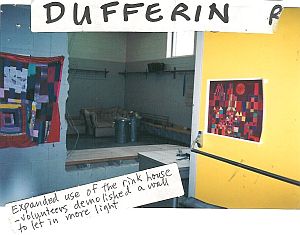 jagged edge: poster from 1995 showing the first wall to come down

We wondered how you remove a concrete block wall. One weekend a park friend came with a spike and hammer to try out a technique he had heard. If you just chip away the mortar, a construction friend had told him, you can lift the block right out and start on the next one. A few of us came over to watch. It was really easy.

So we took out the smaller wall. It took four hours for five of us. Suddenly the view into the girls change room had opened up. The whole place looked bigger.

When we confessed what wed done, there was some finger-wagging at City Hall. But at the same time we had the impression that the city staff got a bit of a laugh. The story spread. Everyone knew that the change made sense, but no one had thought there was a way to make it happen.

The city sent in a carpenter to fix the edges where the wall had been removed. Then we asked for an interior window in the staff office, facing the change room, so that the staff could see what was going on in there. That window was put in by a city crew, without any mention of the cost. We called our city councillor, Mario Silva, to come out and have a look. We asked him, would he be willing to get his Council colleagues to approve money to put four eye-level windows into the rink house, two in each room, so people could see out, and parents could watch their kids out on the ice? And could they be windows that opened, so the building could get some air circulation in the summer? He said, Ill see what I can do.

He came through for us. The city hired two window installers and they had it all done in two days  four windows, each with a quarter section that opened. Suddenly the outside world reappeared, in this formerly sealed-off concrete capsule which had looked so much like a prison holding-cell. The windows were so useful that we knew we had to go the next step. One Saturday morning in October, ten park friends came to the rink with gloves and overalls and dismantled the middle wall separating the two change rooms. It took longer than the first time, to loosen and take down all those blocks  almost 12 hours  but as the wall got lower and lower and the window on the other side of the wall came into view, it was a thrill to see the red leaves of the maple tree outside. Finally, the rink house was one good room, allowing a community clubhouse.

Over the next several years, a few more changes were made, piece by piece as they were needed or as money came available. The window openings were too small to let in much air, so we used the final $700 Dufferin Mall donation to get a carpenter to replace one of the windows with casements. The grandmother of a little skater donated a Maytag stove, so the rink house began smelling like cookies baking instead of only stale hockey bags. In 1996 the City gave us a Food and Hunger Action grant to convert the office, and the slop room across the entry hall, into two halves of a community kitchen. The same year, we sent the Maytree Foundation an old photo from the 1930s, showing a woodstove in a general store with people gathered around it: would the Foundation be willing to fund a woodstove for the rink house? To our delight, they were willing. When it was installed, the city paid for a little wrought iron fence around it, for safety. The fence had an extra bar for drying wet mittens, used countless times since then.

The rink change rooms fluorescent lights were ugly and made people look greenish in the evening, so we begged $1000 of track lights from Home Depot. They said no, at first, and then changed their minds and presented us with the lights on St.Valentines Day. The softer, focused lighting made a huge difference in the long winter evenings  people stayed and played chess, and more youth started bringing their dates on Fridays. After skating, they could drink hot chocolate with their girlfriends and watch the flames in the woodstove together. Then in 2003, the City gave us another kitchen grant to add a second small kitchen in an unused alcove in the zamboni garage. That addition was a bit more complicated, so the G.H.Woods Foundation topped it up with an $8000 grant to let us finish. The second kitchen made Friday Night Suppers possible, and its proximity to the bake ovens (we added a second smaller oven in 2000) reduced the public health officials qualms about food safety.

In this way the existing 3-month-a-year rink house was changed into a small year-round neighbourhood clubhouse. This happened without a middle man, architect or otherwise  step by step and piecemeal, as useful changes suggested themselves to park users and rink staff, and as City or Foundation money became available.

The reason all these changes were needed is that the building was designed for a single purpose  skating  and even that function was given its narrowest possible range. Skaters were meant to come into the building and change from shoes to skates, then go outside and skate, under the on-and-off supervision of rink guards, then come back inside and change back into shoes and leave. 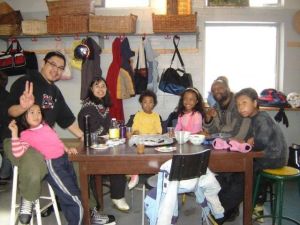 friendships grow in the park clubhouse 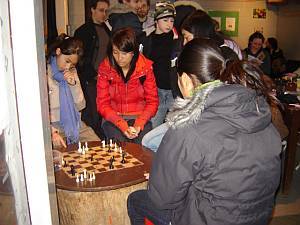 This single-use rink house acquired new possibilities when the changes were made. People came into the rink house and sat down in the big room with their friends, talking and drinking hot chocolate and slowly getting their skates on. Out on the ice, they played shinny hockey for hours and then they got hungry, and went back inside and ate mini-pizzas or soup, and drank coffee. Parents sat in front of the woodstove with their children, reading them storybooks. The old men played card games for hours, and got their coffee for free, since we worked so hard for this country. Sometimes musicians brought their instruments, using the echo-y concrete blocks to good effect. There was enough room to fit in a farmers market eventually, when it was too cold to have it outside along the path. On those days, the zamboni parked out on the basketball court, to make room for more farmers in the garage.

In spring, summer, and fall, the clubhouse became a staging area for dance festivals, outdoor theatre, and cultural events. Park staff and volunteers used the kitchens to turn out snack bar food and Friday Night Supper meals and café snacks and miles of park cookies (if they were laid end to end). All this food became the heart of an ever-expanding number of social encounters, spreading throughout the park. Once in a while, there was even a beer permit and the (re-christened) zamboni café had kegs on the counter. A choir rehearsed in the main room most Sundays, cheering the dishwasher crews, and giving free park concerts in return for the practice space. Dozens of community groups used the clubhouse for meetings, about speed humps, about the forced amalgamation of the megacity, about bike lanes, about endangered bees. There was room to do a huge neighbourhood clothing swap once a year, and to set up a tasting fair with farmers market food cooked by local chefs, and to nurse hundreds of hungry babies, and to sometimes make up a bed for homeless park visitors. Children painted pictures in the clubhouse on rainy days. Youth came to borrow basketballs or build skateboard ramps. These youth, and younger kids too, knew that they could come into the clubhouse to seek the staffs protection, if there were bullies or fights.

One way that all this liveliness would have been stopped before it started is if the City had charged a permit fee for people to use the building, or for programs offered there. But the rink house was an orphan at the start. Nobody (including our little group) thought that the free availability of the space would layer so many activities and encounters on top of each other. It happened because we had more or less unencumbered use of public space: essential for that sociability and new friendships to begin. 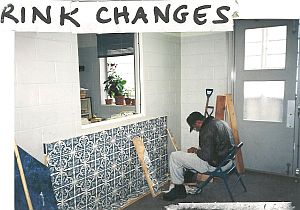 small changes are quick and cheap: turning an office into a snack bar

Ive told the story of taking the walls down a number of times. Each time there is a gasp. The story shocks people. Some listeners seem to think it represents a David-and-Goliath battle against bureaucracy. Others say its a disgraceful example of the lack of a proper consultation process with a long list of stakeholders. But we just wanted to make it work. What shocks me is not that we adapted the clubhouse ourselves, but that so many similar existing park buildings are not freely available to their neighbourhoods in the same way.