some happy skaters on opening day

2:45pm: Though 311 said the whole rink was open, shinny included, the hockey pad was closed when I arrived. The zamboni operator said that the ice was soft, worse than the pleasure pad because of the hockey boards. He said he would do the ice again a bit later once it got harder.

The pleasure pad was still open, a bit soft in spots, but with 13 or so happy skaters. There were a few bored boys kicking around a puck, but the rink guard told them to stop. There were 19 shinny players inside changing, most getting ready to leave.

There were old schedules on a glass bulletin board inside - it needs a screw driver to open it up, but the rink guard didn't have one. I called the local phone line and the mailbox was full.

4:45 pm: It's raining, but both ice surfaces and the changerooms are open. There's an intrepid family on the pleasure pad, a father & 5-year old are sharing a skate aid. The building attendant was there & helpful with info - they've got the schedule up on the wall but waiting for new copies to give out. 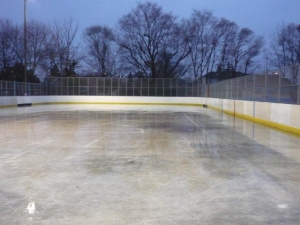 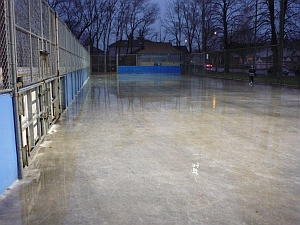