Opening day. The rink has lots of people, as usual. A friendly rink guard skates up and says I can't take photos. He says that the rink had people on it from early morning, and that the ice is fairly good because it's so cold. I suggest that it doesn't need to be this cold because of the compressors, but he says he heard that their compressors are really bad.

This rink never has washroom or changeroom access until after 12 noon, even on weekends.

There's a pile of take-home schedules in a handy plexiglass schedule holder near the entrance. 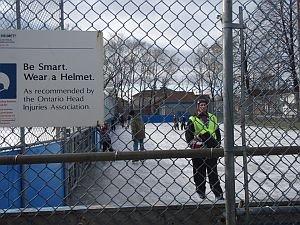 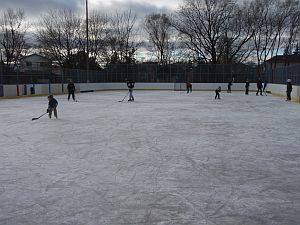 At about 3 pm skaters were enjoying both rinks. A large sign visible to the road advertised a November 11 Remembrance Day ceremony - perhaps this sign could be used to let people know that the rink is open. Three new skaters arrived and were disappointed to find that the rink building was closed (the 2 chemical toilets outside were open). A youth and one family said that they didn't mind the rink building not being open - they were just glad to skate. One youth said that putting on skates outside was "part of the experience" for him. He said that he would like to see the lights left on longer at night. They turn off at 10 pm, but people still want to play, and often play until much later. He felt that it would be safer to play with the lights on. One man said that he thought it might be seen as a "liability" issue for people, but that it was hard to know exactly what the actual danger is.

There were several families - even one with a young visitor from California, skating for the first time. Her relatives, who live in the neighbourhood, didn't know if the rink would be open and they were very glad it was.

Several young people were coming and going to play shinny. Very few people were wearing helmets. I asked if the helmet policy was enforced and a young man told me it was. Most people chose to skate without helmets. 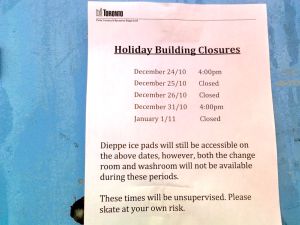 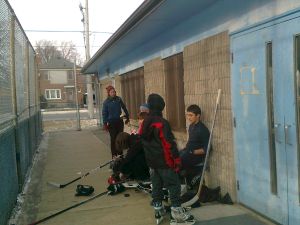 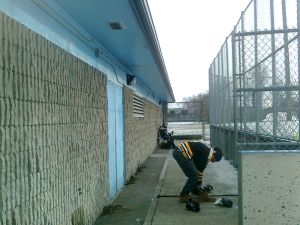 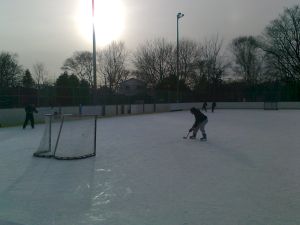