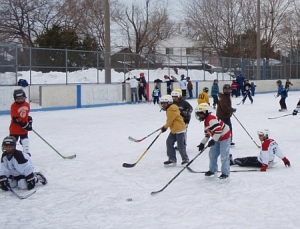 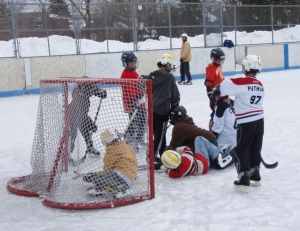 where was that puck again?

The rink is packed with people -- last day. The hockey pad has a huge number of little boys in full hockey gear, and dads, with about five different games happening on various parts of the pad. A group from Scarborough has come over on the subway. Councillor Ootes' office arranged for some of the Dufferin Rink loaner skates to be sent over to Dieppe sent over for them, and helmets. The boys have brought their own sticks but they forgot a puck. One of the dads gladly hands over an extra one in his hockey bag, and out they go, the Scarborough kids, who have clearly not played a lot of hockey. But they fit right in.

The skate changing room has a whole wall of windows -- what a difference that makes, for parents to be able to watch their kids from inside. 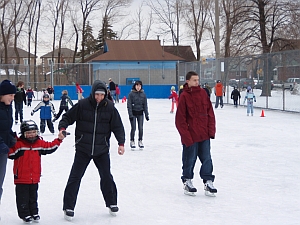 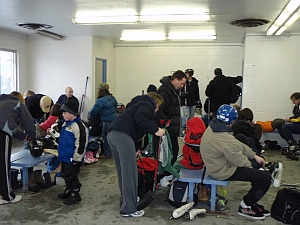 There are 3 people playing shinny and 5 people inside. All the people on the ice are wearing helmets. The ice is okay but not great. The ice was last done very early in the morning and will be done again sometime late at night. But staff really don't seem to know about ice maintenance. There is a copy of the schedule posted and they do not have a copy of their schedule to take home. Inside there is a lot of graffiti in the bathrooms.

4:45PM: Dieppe's double pad, easy access by way of Cosborn and large parking lot should make it a hopping rink on a weekend. Today the lot is near empty and there are only 18 skaters on the ice. At the same time of day there are 25 at campbell rink, a single pad, 48 at Wallace (a double pad) and 176 at Dufferin rink (a double pad).

The rink was not cleaned thoroughly before the ice went in and piles of leaves mottle the ice. Although in near zero temperatures with low sun the ice doesn't suffer from the leaves. However as the temperature rises and the sun strengthens the piles leaves will warm and aid the melting of the ice leaving patches of rough, slushy danger. The ice is pretty thick and hasn't been maintained with a scrape or flood since...staff aren't sure. When might the maintenance crews arrive? Unsure. Although floods are scheduled throughout the day according to the lovely printed schedules available to all.

Dieppe has one of the best changeroom set ups in the city with windows facing the rink. However the women's washroom is in a sorry state of repair with no soap and a broken sink. However the broken mirror from last year was repaired. There is a broken a snack machine in the corner.

3:45pm The gates were locked and both ice pads were empty on Christmas Day.