Compressor is on and there is frost on the rink. The mats are laid down and the changeroom looks clean and ready to go. The doesn't seem to be sign of hoses out.

The parking lot was empty as we pulled up to the rink. We watched a family go up to the rink house and get turned away. Turns out that Colonel Sam Smith had opened in the morning, but then decided to shut down in order to build up more ice. This update didn't make it to the City's outdoor rink status page. There were still three rink guards and a lead rec staff in the rink change room. They said that the zamboni staff felt the weather had been so bad for the rink for the past week... (too warm, too rainy, too sunny). So it was better to shut down now, and reopen later. [Ed. note: weather was ideal for ice making, cold, very short days, just enough rain to build up ice where a base existed.] 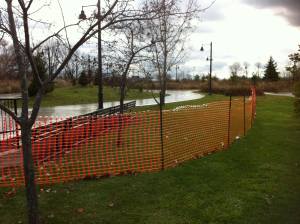 family turned away on opening day 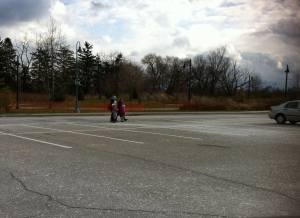