Compressors are on, and there's a layer of frost on the cement. Mats are out.

2 guys were out flooding. The ice looked thinner in some places than others and especially at the edges, but the guys said it was good enough in the middle to skate on now, (but there were no skaters) They will continue flooding and open officially on the weekend. Compressors on. Change rooms locked. 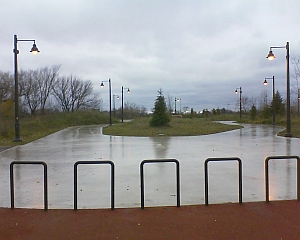 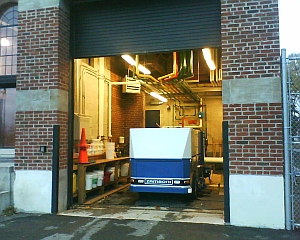 Lots of frost on the ice at night. Lights on. 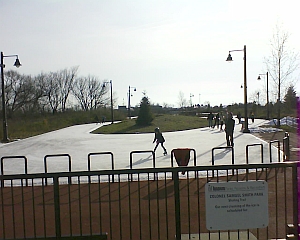 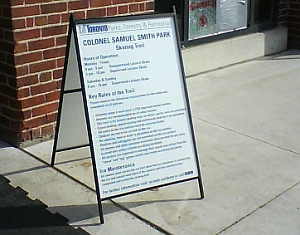 In 1996 a Master Plan study identified the opportunity to refurbish the existing former Power House to support park activities and the proposed "pleasure skating trail" as a recreation opportunity. The existing Power House was converted to accommodate public activity rooms, washrooms, including electrical infrastructure improvements. Concurrently, a new parking lot and traffic turning circle was constructed to reinforce access and to accommodate the arrivals to the Park.

Over the past 5 years, the new outdoor artificial ice skating trail became a reality as a result of focussed participation, community engagement and commitment.

Throughout all phases of the preservation of habitat, culture, heritage was a principle priority. The location of the skating trail minimized impacts and ensured that the park habitat was re naturalized as part of the overall amenity development. Storm water management principles were also introduced to manage the peripheral drainage patterns as well as seasonal operational needs of the skating trail.

The refrigerated trail is fully illuminated with a sound system. Its on average 4.5 m wide and 250 lineal metres in length, with a integral small practice area at the north end.