You are on the [SkateLendingUpdateDec2018] page of folder [City Rinks (Home)]

What happened after the CELOS skate lending offer: 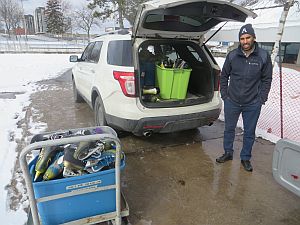 Matt Cutler, manager of Management Services for the Parks and Rec general manager Janie Romoff, wrote to CELOS that the City is "willing to accept, store and maintain the skates and make them available for lending at special events and other pop-up skate programming."

At the Community Development and Recreation Committee meeting, Parks and Rec general manager Janie Romoff said: "We did have a hundred pairs of skates donated in the Regent Park area last year, and we are putting them together as a pop-up opportunity where they can sort of rotate to a number of rinks for that lending opportunity."

City Council did NOT direct PFR to rotate skate lending for the winter 2018-2019 rink season.
Instead, councillors asked the general manager to:

1. implement pilot skate exchange events in conjunction with local Councillors, 1 per district to maximum of 5 events with priority given to Neighbourhood Improvement Areas, prior to the start of the 2018/19 outdoor skate season.

(Ed.note: by December 29, only one "skate exchange" had taken place. There were no posters advertising such events, and the rink coordinator was unable to say where else such events might take place.)

From Anna Morrell, recreation coordinator for outdoor rinks: "There are 5 skate exchanges being organized across the City. These events will be opportunities for residents to drop off unused skates. Residents who need a different size or don't own skates can pop by and select a pair. Dates are being confirmed for early 2019.....If visitors don't have skates to drop off, they will still be able to pick up a pair of skates, providing we have the size they need."

2. A "one-off skate lending program" was to be "formalized" in the 2018-2019 rink season, at Regent Rink, with PFR being directed to include the "required funding" in the 2019 budget. It appears that this is another Family Day program, perhaps with most of the same sponsors as last year. The only element missing is the CELOS-funded staff, i.e. the people who did the actual skate lending, as opposed to supplying a DJ, or cookies, or MLSE swag. There were plenty of extra rec staff, but they did not take part in the skate lending.

Recreation Director Howie Dayton told council members on July 11, 2018, that the cost of running a skate lending program is considerable: "For skate rental, similar to the current model we've got at the Dufferin Grove site there's a cost of approximately about a seven to eight thousand dollar subsidy a season from the city, because it's more a pay-what-you-can model, so to provide the staff, the infrastructure, the skates, the skate sharpening and all of the supports that go behind it, there's a net cost to the city."

(Ed.note: Mr.Dayton had not done his homework. His cost estimate was wrong. The real cost of skate lending at Dufferin Rink is here. Even at only $2 per rental, the program pays for itself, if it's run well. 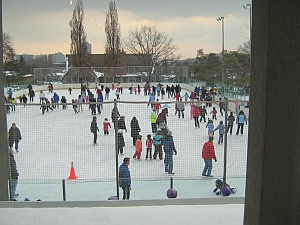 3. That the general manager "report back to the new Parks, Recreation and Environment Committee on the results of the pilot skate exchange program, the one-off skate lending program and any other new approaches to enhance skate lending and exchange by the second quarter of 2019."

the city staff in charge of reporting don't know how skate programs work. In 2010, the city staff who ran the skate lending at Dufferin Rink made an excellent how-to slide show, paid for by CELOS. Recreation management doesn't want to see it or talk to the staff who made it -- staff who know from experience how to make skate lending work easily and cheaply at outdoor rinks.

Ignoring what's so easily available is not uncommon at Parks and Rec, but it's still a mystery. And sad.

The second quarter presumably ends on June 30, so the skate lending/give-away report will once again take place in summer, when ice-skating is not on people's minds. (Source)

Friends of Regent Park have been told that the city is building a sort of ambulant skate lending vehicle or trailer. The idea will be that the skates will be lent out from the vehicle instead of being carted into the change room.

Back to history page