You are on the [RinkPhoneNumbers] page of folder [City Rinks (Home)]

Definition (google): "Customer relationship management (CRM) is a technology for managing all your company's relationships and interactions with customers and potential customers. The goal is simple: Improve business relationships. A CRM system helps companies stay connected to customers, streamline processes, and improve profitability."

It's not cheap, and the customers are paying to be managed: http://app.toronto.ca/tmmis/viewAgendaItemHistory.do?item=2020.BA71.3

On a sunny day at plus 2C, all the city's rinks were listed as open, except for the two that are broken down. "Open" is the closest skaters can get to finding out ice conditions. Here's an email from a skater about Wallace Rink at 4.20 p.m.:

Wallace Emerson rink is extremely soft, it seems pretty dangerous to me. It's easy to trip on the holes in the ice. It's not good for beginners or people who are nervous about falling. There are about 6 people attempting to skate on the pleasure pad, and a game of shinny going on, on the hockey side (which may have slightly better ice).

Why does the city list mushy ice as "open"? Don't they care if somebody gets hurt, or even if a family packs up everything for a skate outing and then finds the ice unskateable?

Or does the city need a certain number of "open" days to justify the March staff budget?

At its final meeting before being dissolved for the 2018 election, the Community Development and Recreation Committee had before it an artificial ice rink report from Janie Romoff, the general manager of parks and recreation.

The PFR general manager's report on outdoor rink standards and information does not match the cityrinks.ca daily information-error record log for the 2017-2018 rink season.

The general manager reports a 78 to 96% "customer satisfaction" rating. But PFR's meagre 3-day ice opening preparation is not best practice and did not work again this year. Also, "real time" information only works when the weather is uneventful. During warmer spells and stormy weather, 311 information was more often wrong than right.

Our two-year cityrinks.ca record of daily 311 "real-time information" for the outdoor rinks is here, with the more obvious errors highlighted in red. There is a lot of red.

We urge the councillors to send this report back to the general manager for assessment of our ice maintenance and communication log.

The committee did not address the issue and there was no follow-up.

2003: Soon after David Miller was first elected as mayor in 2003, he took a trip to Baltimore. He came back with stars in his eyes, a convert to their 311 information system. 311 was the central number you could call in Baltimore to report a pothole or a slummy house or a broken park bench. 311 was backed by a system called citistat described as an executive information system like those used by corporations such as Frito-Lay or Mrs. Fields Cookies. The idea was to get as much data as possible and enter it into a system where it could be continuously analyzed by management. The systems boosters described it like this: Tracking citizens' complaints, requests, tips, and comments can provide a wealth of information about service levels, employee interaction, and neighbourhood conditions and trends. Baltimores 311 telephone line provides a comprehensive system for gathering this kind of soft data.

And the gathering of data would somehow lead to tremendous savings  officials in Baltimore told our mayor that they had realized over $40 million in financial savings since they put in this system.

Wow! Mayor Miller came back and made sure that Toronto got one of those 311 systems as well. And since then, every few years there have been reports to the city council committees about how well city staff feel the system is working and how much money they assume it's saving.

But we have to give it a big bad raspberry for ice rink information.

2006: Before 311, rink users could look in the phone book and call their local rink to ask about ice conditions. Then they could decide if they ought to get their skates and come down, or not bother until the ice was better. But in 2006 the order came to make individual rink telephone numbers unavailable to the public. Skaters were instructed to call one convenient number for rink information: 311. Or they could go to a central rink information web page.

2014: We counted: that year some of the 311 outdoor rink information was wrong more than 50% of the time calculated over a whole season; during storms that goes up to 90% wrong. No wonder. Toronto has more municipal outdoor compressor-cooled ice rinks than any city in the world  over 50. Every time the weather changes (sometimes three times a day), ice conditions may change. Thats way too many updates to be entered into a central reporting system.

2018: CityRinks has been tracking 311 since 2013. The situation is not getting better. And as the rink seasons wear on, the supervisors seem to get more bored of giving individual rink details. When there are weather issues, the central Toronto rink supervisor has been just marking all his rinks as snow removal in progress, until someone thinks of changing all the listings back to open. In Etobicoke and North Toronto, it can go the other way, with all the rinks marked as open during snow days.

Example: see February 2018. Dubious information is highlighted in purple. The wrong information during February can at mean that families could get everybody all bundled up and ready to skate -- and then arrive at a closed rink that was listed as open. Or the other way round -- a rink with good ice is left empty of skaters because it's listed, for some days, as undergoing ice maintenance.

A phone call is a simple, straightforward solution for a problem made complicated (and expensive) through 311. Sooner or later, rinks will need to return to using the phone again. 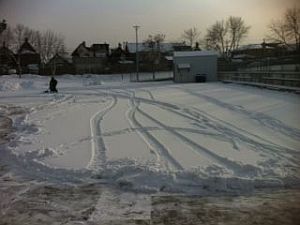 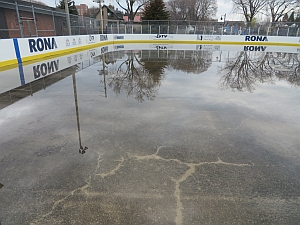 I copied him on an email about 311 acting as a phone directory. He wrote: "Would it be possible to have a conversation? I can follow up via email after our conversation, if required, but I would truly like to have the opportunity to exchange ideas if possible? I absolutely respect your privacy - my number is 647 464-4488."

He said that they are thinking of rebranding 311 to "Toronto At Your Service." I had sent him the link to this 311 page on cityrinks, but he hadn't looked at it. He said he would look at it and bring it up at a meeting within a week. I said I would call him when rink season begins again, to give feedback.

The simple solution is still off the table. When asked about this, Parks manager James Dann said that sometimes there are no staff at the rink and so the phone wouldn't be answered. Instead, area supervisors now have an app that will allow them to change the ice conditions information remotely, instead of calling it in to the manager's assistant, who then had to post it for them. Now the supervisors can post the changes. They will no longer have call it in to 311, either. Instead, when someone calls 311 for outdoor rink information, the 311 operators will simply read it off the website. The 311 operators say they can now do this because the posts on the website are in what they call "real time."

Notice on the website, February 2016: Outdoor rink operational status *NEW FEATURE: Updated in real-time* (alerts are only posted for closed statuses, if no notice is posted there are no issues with the rink)

So we'll monitor how this is working.