You are on the [RinkOpeningCollect] page of folder [City Rinks (Home)]

The rink staff seem to want to put on as much water as possible all at once, and then they go away and come back some hours later when the ice hardens. It makes for rough, uneven ice. Thin, frequent floods with a nozzle are the standard, and then the ice freezes smooth and beautiful. But that's rarely seen at the city's rinks.

As forecast by Environment Canada, the temperature dropped to minus 9 overnight and stayed very cold all day. There were winds gusting to 70 K. Ice maintenance staff worked parts of two shifts to hose the ice, but it looked very rough, with lumps of ice, snow under the ice, and many leaves frozen right in.

The test patch looked surprisingly solid, no cracking or shelling, but still it was too thick. 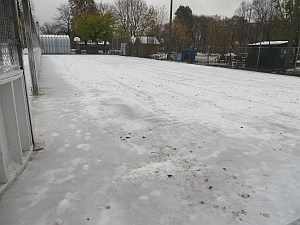 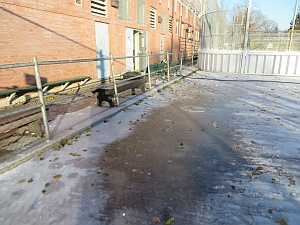 The compressors were turned on two days ago, so the slushy snow that fell since last night has frozen right onto the slab. So did the leaves. In the morning a tractor ploughed the top layer of snow off, but you would hardly know it -- there's an inch of snow crust all over the rink. Nobody returned to hose the snow off with hot water (which might have been worth trying, since the temperature went over 0 this afternoon). What will happen next, with more snow coming, and much colder temperatures tonight?

The recreation program staff have the impression that all the ice maintenance staff are at their yearly refresher training, every year the same. Maybe that's why they couldn't come and try to fix the ice.

Later on, volunteers hosed a test patch of 6 x 20 feet with hot water. The temperature was at 0 and the snow melted in five minutes. But it was hard to get the water off -- a zamboni might have been a big help here.

At 10 a.m. the rink was closed. As in the previous 3 years (but never before) the pleasure-skating side had been turned off and the compressor power had been redirected to the hockey pad. There were some zamboni tire tracks on the hockey side.

Strange that Rennie Rink can't open on time, since it has higher compressor power than almost all other city rinks (200 hp) -- as much as Harbourfront's Natrel Rink, which is open and full of skaters. Other nearby rinks, with less power, are open too....? 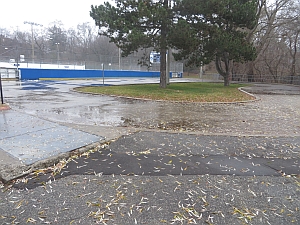 pleasure-skating side turned off, back to cement 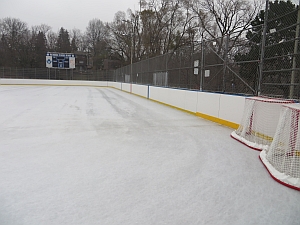 hockey side has ice, but it's closed

The zamboni driver said that he had to close the hockey side and had been putting down as many floods as he could. 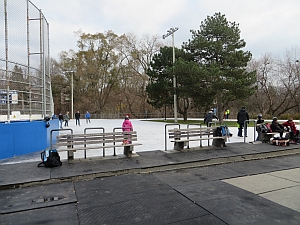 skaters on the pleasure-skating side 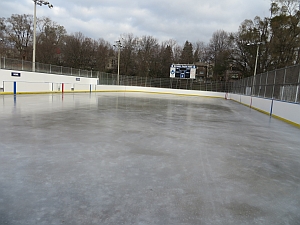 At noon, a group of kids from the school were trying the ice in their shoes, delighted to see that there was lots of ice already. On our visit the day before, four staff were chatting at the top of the stairs. They said they had begun flooding on Tuesday the 23rd, in the evenings from 6 pm to 2 am. The staff said they couldn't do more because there simply were not enough staff. 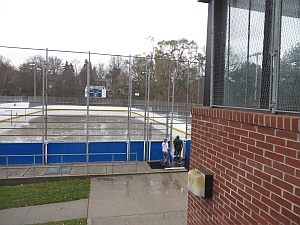 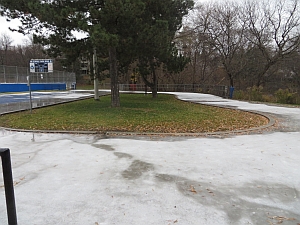 The rink opened on time and with very good ice. In fact, skaters reported that they had been skating (and playing shinny) at night for several days already. This is despite daytime temperatures of 15 celsius, and on Wednesday overnight, the same.

The rink is not supposed to open until 5 days from now but it has lots of ice -- more than in some other years on opening day. The rink staff were just putting the zamboni away -- obviously they've been using it already. 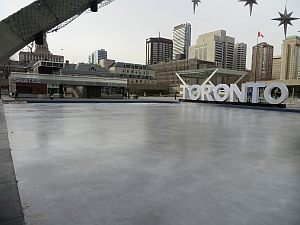 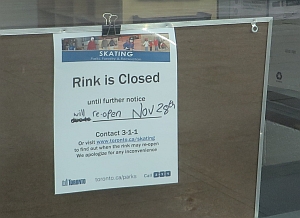 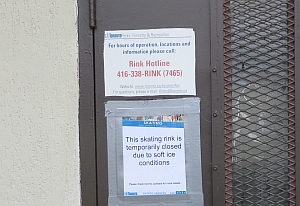 The rink was scheduled to be open, but there was only thin ice. A sign was posted on the door, saying the ice is "too soft so the rink is closed," and the doors were locked. Some knocking brought the zamboni driver to the door. He said, "can't you see how warm it is outside? Of course the rinks can't be open." I told him that quite a few rinks were open and the ice was fine. He said, "they have much better cooling." I said, "no, some of the ones that are open have the same amount of cooling as your rink. When did this rink start making ice?"

He rolled his eyes and said, "I'm busy, I can't take any more time to talk."

And slammed the door. 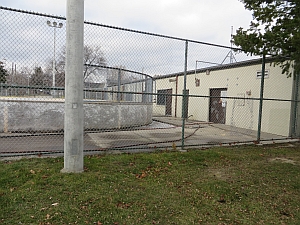 hoses still out -- when did they start ice-making? 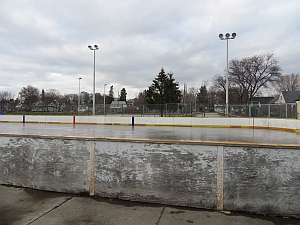