You are on the [RegentPlacemaking] page of folder [City Rinks (Home)]

From Dale Howey: "I was only there for two hours, and shoveling popcorn into bags much of the time so didn't take too many pictures. It will be interesting to see both what the city intends to do next year and what Regent Park can do without MLSE....There was lots of city staff, and it seems like there was a significant effort by the city to make it a good event." 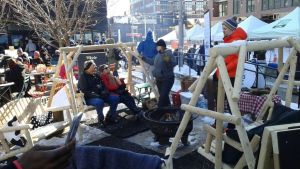 Installation run by Evergreen but paid for by the city 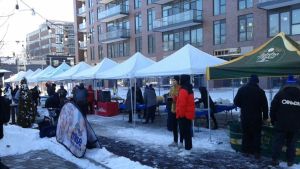 tents set up and run by MLSE

Food and swag are free on that day, so there are lineups and crowds.

Several youth volunteers were sent over by Dixon Hall. The arrangement is that the youth, although called "volunteers," are actually paid, and if they don't do much work that's fine because it supposedly keeps them out of trouble. The funder is the Daniels Corp. This was the same situation last year at Family Day. Many people think that paying youth to do little or nothing because they are troubled in some way, or just because they live in the area, is a very bad idea. But that's somewhat part of the local culture, i.e. the city rec staff are usually also underemployed during their supposed work time.

From Dale Howey: "Two volunteers seemed to be doing the skate lending. There werent many skates on the shelves as they were all lent out but I didnt look to see sizes. With a third of the room filled with cookie decorating it was pretty crowded. Im not sure what the turnover rates but when I looked there were maybe 10 pairs on the shelves." 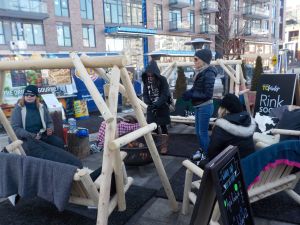 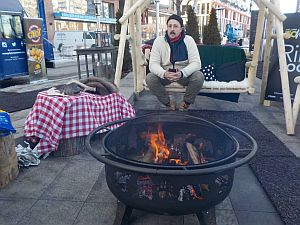 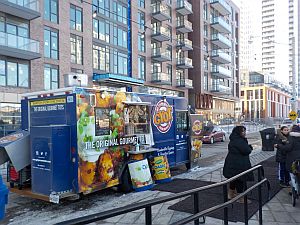 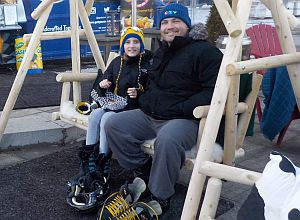 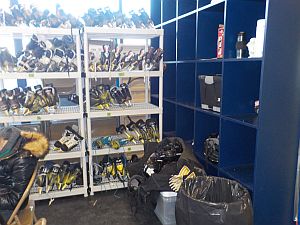 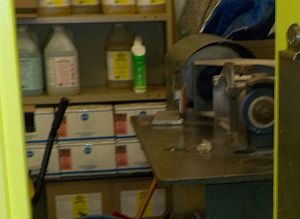 There were many rec staff in the building, mostly clustered around the information desk. A few looked like staff who work there normally. Many had been sent from other rinks or community centres. They seemed to have no sense that they ought to be working with the staff from Evergreen, or really to have an idea what they ought to be doing. So they mostly hung out and chatted with each other.

This means that the regular staff of Regent Rink may have learned very little about this "place-making" that was supposed to be happening as a partnership between the City and Evergreen.

One hopeful note: there was often at least one rec staff person out on the ice helping kids with the sledges, which were a hit. Will the Regent staff use them again? Or will they do anything special again? 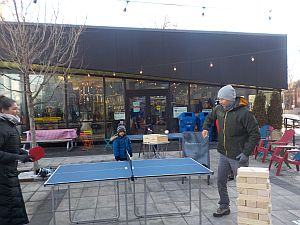 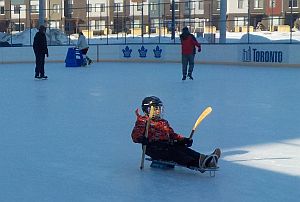 sledges to try out

The new condos across the street put most of the rink in shade by 1 pm: 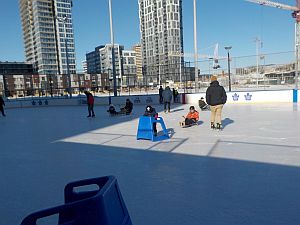 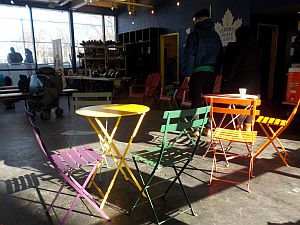 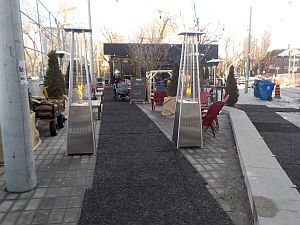 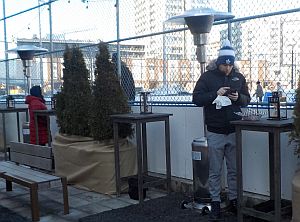