You are on the [MediaSkateLending] page of folder [City Rinks (Home)]

On March 1, 2018, Matt Cutler, manager of Management Services for the Parks and Rec general manager Janie Romoff, wrote to CELOS that the City is "willing to accept, store and maintain the skates and make them available for lending at special events and other pop-up skate programming." read more

Regent Rink has an ideal layout for skate lending: 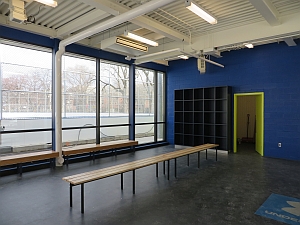 inside with new benches, cubbies instead of lockers (really?) 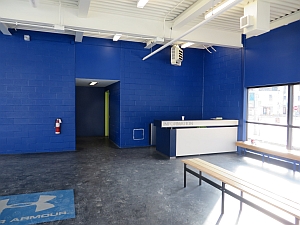 Dec.8, 2017: Notes on a meeting with city management about the Regent Skate Lending Proposal here

Dec.12, 2017: Notes on the second meeting with city management here. Skate lending is "not part of the city's core business."

Background page on the core business of Toronto Parks and Recreation.

Dec.19, 2017: Skates donated to Friends of Regent Park. Decision to start with three skating/DJ events at Regent Rink after the school holidays are over. read more

Dec.27, 2017: City Councillor Layton on why there can be no skate lending at any more neighbourhood rinks, in the West End Phoenix, December 2017

Jan.4, 2018: Follow-up correspondence with Councillor Layton, telling of his intention to ask the Community Development and Recreation Committee to request the general manager of Parks and Rec to report in July on possible approaches to adopting a skate-lending program at outdoor rinks.... read more

Jan.5, 2018: The new Bentway Rink opens. It's partnered with the City of Toronto, but -- following Mayor Tory's wish -- not run by Parks and Rec, which runs the other 52 city rinks. The Bentway Rink will have skate rental every day: read more

We've heard that there is a willingness to "make this work" -- meaning for sure there is to be a Family Day event with skate lending and hopefully two more events of 3 hours each, with Artscape supplying the DJ, Daniels Corp providing hot chocolate and cookies, and the city helping with promotion. Cityrinks.ca has donated the skate collection, helmets, sticks, record-keeping binder etc. to the Friends of Regent Park, and funds from David Rothberg's donation will help them pay for doing the actual skate lending on the day(s).

So the skates that would have been available for use at the rink every day since Nov.27 will stay in storage, somewhere, the rest of the time. The two existing rink staff will continue to sit behind the rink change room desk with nothing to do most of the time. read full letter

May Warren, in Metro News, a follow up about skate lending.

willing to accept, store and maintain the skates and make them available for lending at special events and other pop-up skate programming.

Email to Matt Cutler, office of the general manager of Parks and Rec, about the donation of the skate lending collection.

City Council directed Parks and Rec last July to set up five "skate exchanges" instead of skate lending events) before the rink season started. The events seem to be still up in the air. However, Regent Rink has a commitment that there will be skate lending on Family Day again.

Through the place-making initiative, Evergreen and La Pépinière brought together City partners, staff and designers to rethink the public's relationship with each rink. Incorporating interest in ancillary services such as skate lending, social gathering spaces and food and beverage opportunities, the team worked to add low-cost and temporary furniture, activities and décor that will transform each space into an even-more vibrant community gathering space. This initiative will be used to gather data on user interest and satisfaction to guide future space and program design.

Matt Cutler, whom I saw just before he stopped being the PFR partnership manager, told me that sometime this spring or summer there will be a ECDC committee report about the city's "Rink Socials"/place-making partnerships that happened in February/March. Could you let me know at which committee meeting that report will be on the agenda?

"Following the results of the 2018/2019 pilot, PFR will hold five skate exchange events around the city during the 2019/2020 season in coordination with local Councillors.These events can be accommodated within the 2019 Council Approved Operating Budget. Skate lending, which was made possible by partnership funding, provided participants temporary access to skates and access to outdoor leisure skating. Skate lending is not a funded service level in the 2019 Parks, Forestry and Recreation Council Approved Operating Budget. If sponsorship and partnership funding is secured for the 2019/2020 winter season, skate lending will be planned and implemented."

The Economic and Community Development Committee: May 27, 2019 item on skate lending

"Parks, Forestry and Recreation will deliver the Skate Exchange program during the 2019/2020 season and will pursue ongoing partnership funding to continue skate lending."