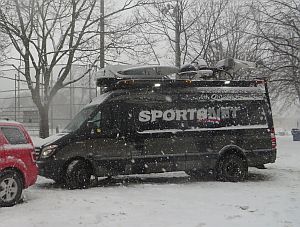 Their reporter called cityrinks.ca because at around 1 p.m. all the central-Toronto rinks (24) were suddenly listed as "closed for the season," (they were not) and CityTV was getting calls.

311 said they had been getting calls and were checking into it. At about 1.10 the listings changed to all the same rinks being marked as "closed," (they were not) and then by 2 p.m. they were marked more accurately as having ongoing snow clearance.

So CityTV took the occasion to send a broadcast truck to Dufferin Rink and do an interview, followed by live footage of the rink for their 5 and 6 pm newscasts.

Find out more about the problem history of 311 as it concerns centralized outdoor rink information here.

The solution is so simple -- publish the individual rink phone numbers, as is currently the case with indoor arenas and swimming pools!