There are signs up saying the rink will not open until Dec.1 -- the first time in a while that City Hall doesn't even try to open soon after Harbourfront (which is not a municipal rink).

No reason is given, but there are lots of trucks around, and workers peering into holes. 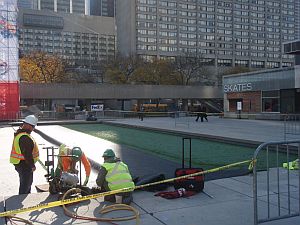 artificial turf being laid over the rink surface

An artificial turf truck is parked next to the rink and some men are rolling out the turf carpets onto the rink.

The Toronto Star says that the renovation of the rink is going to cost $750,000 more than expected because of the cost of building a retaining wall that was supposed to be there already.

That will take the cost up to $2.9 million. It's a very popular rink, always packed in the evenings. But spending that much money only makes sense if the rink is actually up and running -- not if it's being used as a turfed-over platform for the Grey Cup celebrations. There's plenty of room for both the celebration and the skaters. 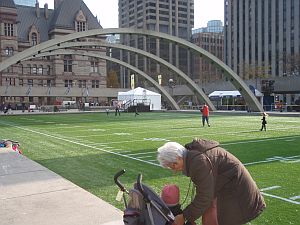 rink is covered with a mini-football field

Harbourfront Rink opened today for skating, but the rink at City Hall has been covered with artificial turf with football markings. There are a few kids running around on it, and there are sounds checks being done on the big stage, and construction workers are busy working on the smaller performance area on the west side of the square. High up, there are people zipping overhead on the Toronto Sun zipline, and there's a mobile phone Ad truck parked next to the skate rental (which is closed, of course). 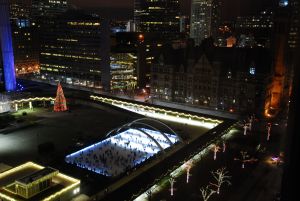 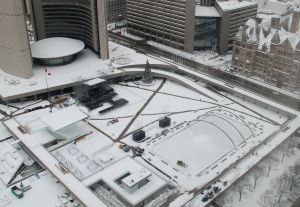 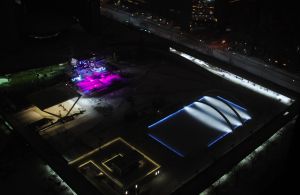 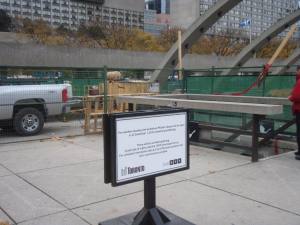 MY daughter went skating at nathan phillips square and her brand new christmas uggs went missing from the change room. She's 14. What kind of place is this? no security in the room? Last time we will ever go there.

from cityrinks.ca - Jan. 7. 2013 I'm sorry to hear your story. We've had another person write in about City Hall Rink needing to have lockers to keep items safe. We are not a City site - so i strongly suggest you email 311 asking to have lockers put in so they can forward it to the appropriate dept.. Here is thier email address: [email protected]

We regret to hear that your daughter lost her Christmas Uggs boots at Nathan Philip Square Artificial Ice Rink. That would be a disappointment after an otherwise excellent day of skating.

Please be advised that coin lockers are available in the change room at Nathan Philip Square Artificial Ice Rink. The cost is 25 cents, and the coin is refunded when the key is used to open the locker.

Staff do supervise the change rooms frequently for behavioural issues, but cannot be responsible for personal items left unsecured. We encourage all patrons to use the lockers or to take their belongings with them.

If I can assist you in any other way, please contact me.

I am going to be skating at Nathan Phillips Square, and wondered whether there are lockers we can rent to hold our purses/phones/other valuables?

Feb.2, from cityrinks to Linda

Hello - there are lockers, it seems. See here: http://www.cityrinks.ca/wiki/wiki.php?n=CityHallRink.FrontPage#Diaries If you get a chance to let us know if they are accessible and what your experience was like - please do.

Feb.2, from Linda to cityrinks

Thanks for this information. I went skating and it was terrific  good skates, plenty of lockers, and lots of fun!

Your website says that the nathan phillips square rink closes for the season on March 10 but according to the city of Toronto it closes on the 15th. Normally that difference of 5 days wouldn't matter but it happens to cover March break so visitors to the city might want to know that the rink is actually opened. Your site is the one that comes up first when I google Nathan Phillips Square skating so I imagine that is true for other tourists too.

Thanks for pointing that out. Cityrinks.ca actually has individual pages for 56 compressor-cooled rinks plus 18 natural ice rinks. On the home page we wrote March 15, but I'll change the sub-page too.

If you look at the home page you'll see that we're the unofficial website, i.e. we're not a municipal site, we're outdoor-rink enthusiasts who want the rinks to work well. Outdoor rinks don't work at all well in March, the sun is too high already and has too much power: http://cityrinks.ca/wiki/wiki.php?n=HowToFixIt.OutdoorRinksAndWeather. Compressors are strong but the March sun is stronger :-)

Note today's "latest news" on our home page -- if the sun keeps shining during most of the day, the rinks will start to be mush by 1 pm, and will be mostly unskateable by 3. Some ice surfaces may come back for an hour or two by this evening, if they're not too rutted from people trying to skate on them.

So out-of-town visitors might want to leave their skates behind, no matter what the city's rink schedule says...