City Hall's Nathan Phillips Square is being renovated, so there's a lot of activity. Surprisingly, there's no concrete on the rink, only sand. The construction is not finished, so the ice will go on top of sand this year. Interesting experiment.

The building beside the rink is very nice. It has a very big deck, with two areas of roof garden. The new toilets are a big step above the old ones. One odd thing is that some of the auto-flush mechanisms seem to go off on their own. But they don't stay on long. 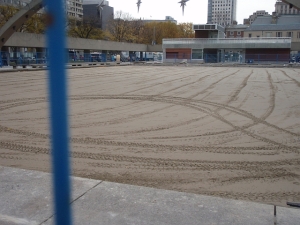 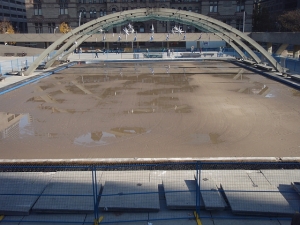 two days later -- view from above 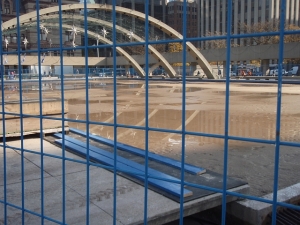 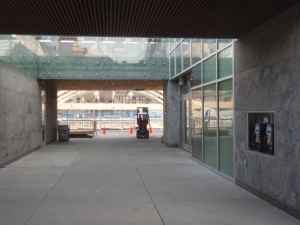 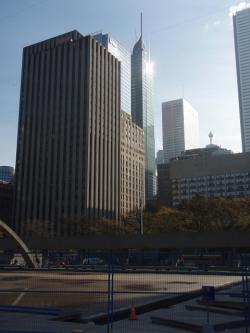 rink view to the south 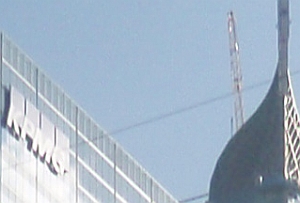 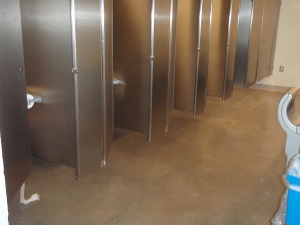 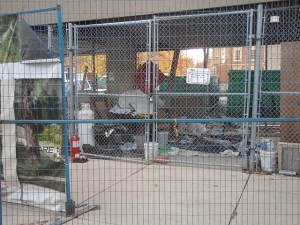 no sign of a zamboni garage yet, just clutter

The compressors are on but cooling the sand down slowly, since the pipes carrying the coolant are new this year. They have to be treated a bit gently.

Nobody much seemed to be around at 1.45 pm but the rink looked a bit more frozen than yesterday. Workers have set up the giant Christmas tree and are hanging huge red balls on it with the help of a cherry-picker. 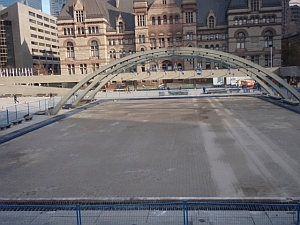 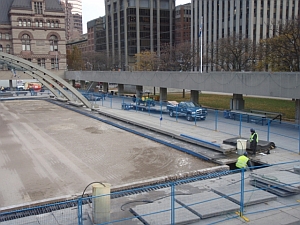 some people working at the pipes

Everything was locked up and no lights were on. There were no staff working but I talked to a guy who said he is responsible for flooding at other rinks and he knew a lot about Nathan Phillips Square. He said the sand is being used over the cooling pipes as a layer because the concrete wasn't completed in time for the season and will have to wait until next year to do it properly now. He said the problems with the sand are that it first has to be wetted with sprinklers to make it hard before they can flood on top. He thought that 2 shifts were coming in to start flooding that night (one starting at 12am and one at 5am). He said he was worried the ice wouldn't be ready in time for the Santa Claus parade this weekend, but the hoped it might be done in time for late Sunday. No mats out and too dark to take photos.

Concrete slabs have been removed at rink edges to expose the cooling pipes.

11:15 am: there were three workers doing something with the cooling pipes, one row of concrete slabs had been taken up to do the work, so it will still be some days to finish that, put the slabs back in and put the mats down. One worker estimated Wednesday for opening. The skate rental shop is all ready to go, the woman who runs it (Shelley) was there & had been still been under the impression that it would open tomorrow, no one had told her about the delay. She was annoyed, because she's already put her dog in a kennel and moved down from Barrie for the season. 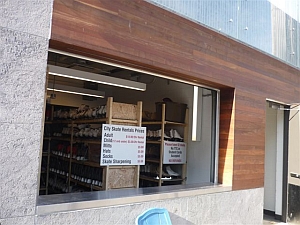 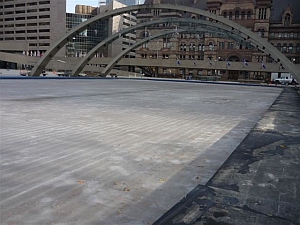 a little more white but not skateable

At 3 a.m. there were two staff flooding the ice.

a thin sheet of ice now

ridges of hardened sand, other stuff frozen into the ice

8:30 pm: The mats are all down & there's a thin layer of ice but with cracks, a couple of gouges. Someone from Parks & Rec happened to be walking by at the same time with a friend - Richard Gubbins? Stubbins? and he said that crews might have been breaking through to eliminate air pockets from the ice, but they'd have to be careful because there's only a layer of sand between the ice & the pipes this year, since there wasn't time to put down a concrete pad before the winter, due to construction & repair delays. He didn't expect the ice would be thick enough tomorrow either.

There's steady progress in ice-making. One of our rink visitors says that a woman told her there were four people playing shinny here last night at 2 a.m. -- three guys and a girl. 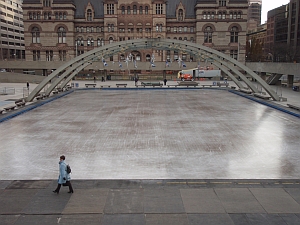 progress with the ice 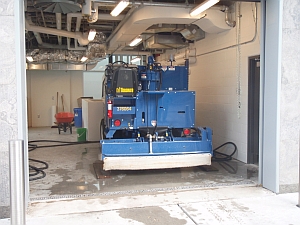 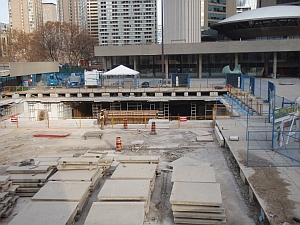 City Hall construction -- to the parking garage, near the rink 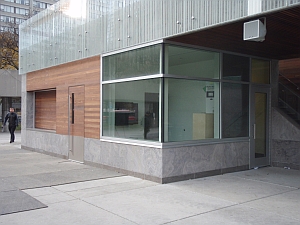 no sign on office window about why the delay

9.11 a.m., report from rink user: "I skated this morning at city hall, the ice is good. Not sure how it will be later in the day with the warmer temperature."

Excellent ice. Both the skate rental and a new snack bar are open. 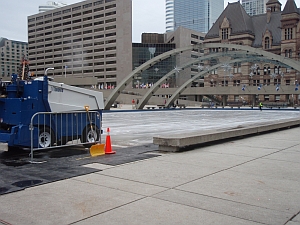 the zamboni going on the ice 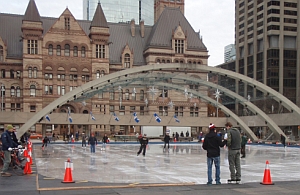 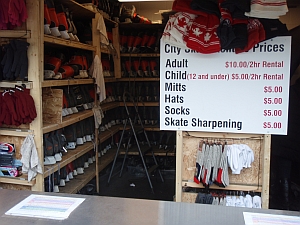 skate rental, they sell hats and mittens too 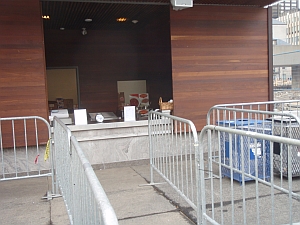 From rink user Eric HM: 9:30pm. There were maybe 80 people on the rink, most pleasure skating around the perimeter of the rink, with a lively game of 16-20 shinny players in the center area and a number of people sitting along the edges of the rink. It was very crowded, but the ice was in decent shape. Felt like a really relaxed atmosphere even with the shinny in the center.

The rink is full of people, as usual. One very strange thing -- there is a sound system, which often broadcasts a radio station that has a lot of commercials. So those commercials take up half of the sound space of the rink. Do they pay the city to play this stuff? It's pretty bush league. 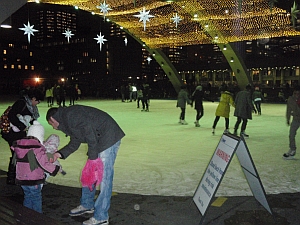 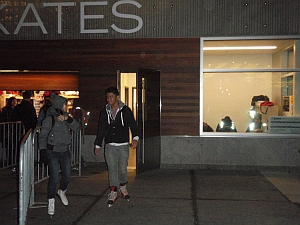 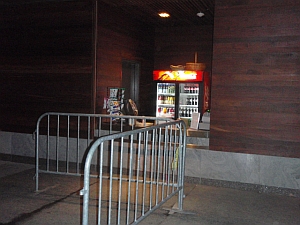 The rink at Nathan Phillips Square is tremendously popular. Some photos from rink visitor Rafael Lewis: 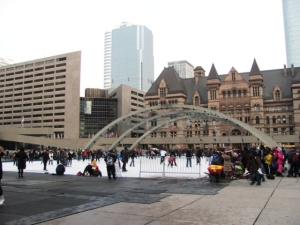 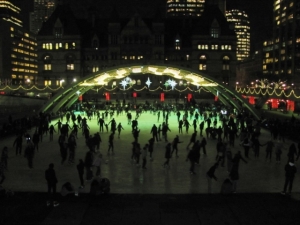 a very popular spot for skaters -- how can they even move? 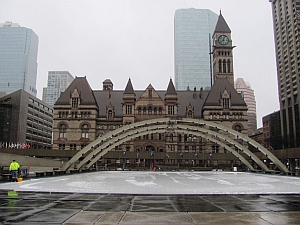 deserted at lunchtime: too rainy

From rink reporter Raf Lewis: Don't think I've ever seen the rink deserted at lunchtime, so I took a couple of pictures. I guess it didn't help that it was raining and the ice had multiple pools of water around.