Peter Kuitenbrower wrote an article in the National Post about delayed construction that may interfere with City Hall Rink opening on time.

City Hall rink was scheduled to be open one week from today, but that seems unlikely. On this foggy morning, the rink surface was plastered with mud. Both the header trench (with the pipes) and a trench at the other end were open. plus the trench where the summertime fountain sprays out. Two cherry pickers are on there -- to decorate the arches with Christmas Lights? Hard to tell.

This rink has had many last-minute mechanical problems. Now the Nathan Phillips Square construction is added to that. The building that housed the washrooms and the skate lending area is gone. 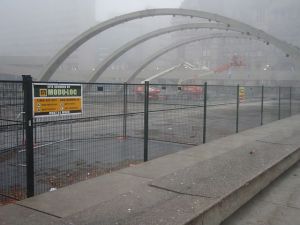 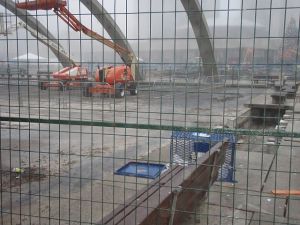 cherry pickers, and open trench on the east side 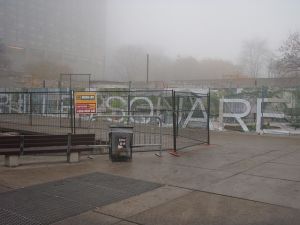 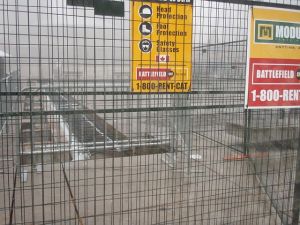 header trench is open, for repair

Yesterday the order went out to delay all the rink openings for a week "because of the weather." You have to feel sorry for the weather -- it has to serve as en excuse for a lot of ills. Such as the fact that the rink is just not ready, not even cleaned.

The rink is cleaner now (last night's rain may have helped too). CIMCO Technicians were preparing to service the pipes. 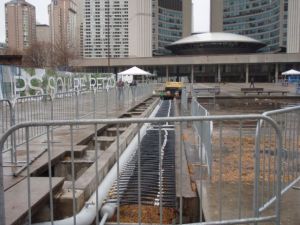 Nov.18 -- the open trench for the cooling pipes

There was a small group of workers looking into a hole. When asked how much horsepower the compressors at City Hall rink have, they said, no idea. Since some of them were CIMCO workers (the compressor company), one hopes they do know. Maybe they're told not to talk to the public. Cityrinks.ca has contacted 311 to ask how much horsepower is at City Hall. The staff who responded said she doesn't know, but will find out. 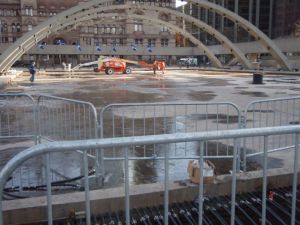 Not much activity in the morning. The trench is still open and bits of cut PVC pipe is lying around. The rink is puddly and muddy. City staff say they have forwarded the question (of how much horsepower the compressors have) to the technical services staff, and will get back to us with the answer. The reason for the inquiry is that a management spokesman told the Star on Wednesday that Harbourfront has vastly greater compressor strength than the municipal rinks. Unlikely, but we'll see.

Weather: high +4 low -5, sun and cloud This rinks and 13 other municipal outdoor rinks were scheduled to open for the season today. However, it looks like the season's preparations are not even done yet. Meanwhile, Harbourfront Rink opened today, with lots of skaters. 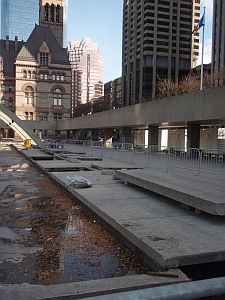 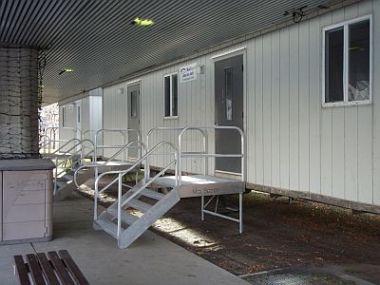 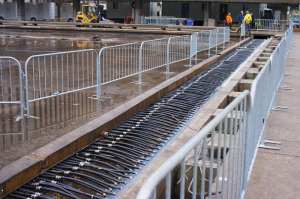 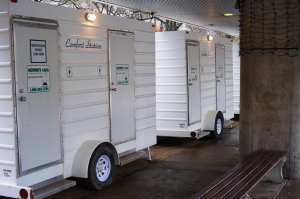 At 12 noon there were a bunch of workers hanging around the header trench and there was no ice on the pad at all. A shallow slit running along the pad was filled with earth. The second time I visited, at around 10 pm, there was a very thin layer of ice on the pad and no workers around. However, I did notice that skate mats were now set up all around the rink. It was raining and would rain even harder during the night.

5 pm: There was a man flooding the rink and the ice looked decent. The header trench is still open. 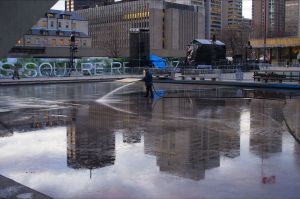 flooding the ice in time for the Cavalcade of Lights event 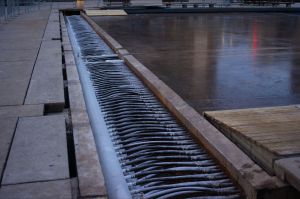 They managed -- miraculously -- to open the rink, by flooding all night and all morning too. A worker said he had to fix two busted pipes (maybe he was a plumber) at 2.30 in the morning. Whatever it takes.

The skate lending was going, the concession stands for tonight's Cavalcade of Lights were just setting up, the zamboni was in a little chain-link fence cage to the south of the former skate building (now gone). 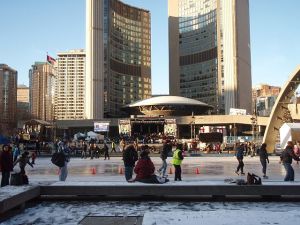 the Cavalcade stage in the background 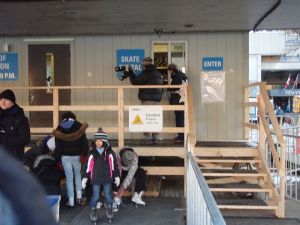 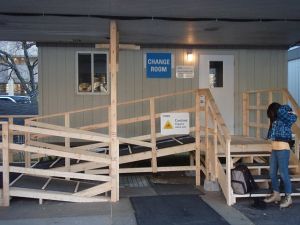 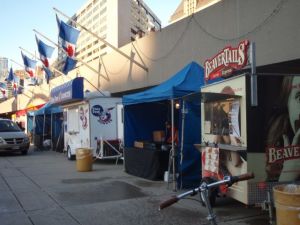 Lots of skaters at City Hall Rink, but very few people renting skates - the normally long lineups are not there. There seems to be a continuing problem with the pipes. The header trench is open at both ends, with a bucket and a hose attached. 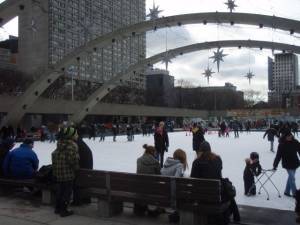 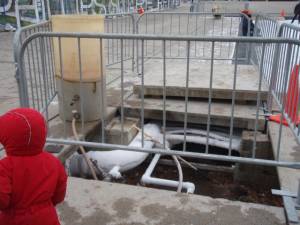 All winter long, the construction crews have been working to the north and the west of the skating rink. Even so, it's a popular place to skate. One odd thing -- the rink has music on loudspeakers, but the source is a commercial radio station, and there are lots and lots of ads. So it's possible to be skating there and hear loud ads for cars, deodorant, banks, etc, about half the time. Embarrassing, for our main public square.

5.25pm: Rink open. Quite a lot of skaters. There were large pools of water on the ice. Where there was no water the ice was rough and a bit lumpy, but it felt hard. 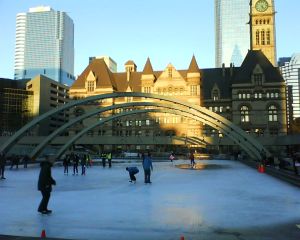 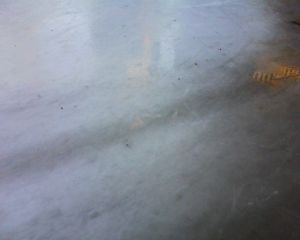