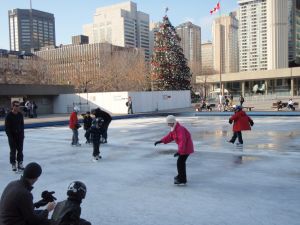 back on the ice, first day

Despite the slow start in ice-making, the rink opened today. The centre still had the earth section from the summertime palm tree plantings. But it was market with pylons, and nobody seemed to trouble themselves about it. There was a good lot of people skating, and even though the northeast corner was pretty wet, nobody seemed to be complaining.

At 9 pm the rink had lots of people on it, but they were skating in the dark, with just the light from the hotel windows across the street to guide them. The rink operators said that nobody remembered to turn on the lights centrally, so there was nothing they could do.

I asked them if they had done any overnight floods, and they said, two or maybe even three nights had been staffed for flooding overnight.

8pm - 5 skates, 5 hangers around. No helmets. No visible staff. Ice looks great. The skaters are racing across the ice holding onto each other's waists.

At 5.10 the rink was edged by skaters, waiting out the ice maintenance. On the south and east side of the rink there were a lot of blue tented booths, and a music stage was set up to the north, near the main doors of City Hall. A rapper was carrying out a booming, truly resonant sound check. The zamboni was doing a slow flood on very fine ice.

Many of the booths were empty, but one had a candy floss machine, operated by two youth. I asked them what event was on, and they pointed to a big sign: "Festival of Lights." They said it would begin in 20 minutes, and indeed when I rode away, I could see lots of people walking toward the square. 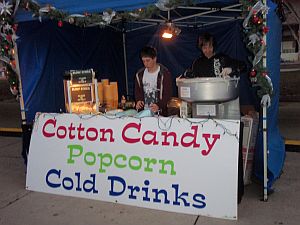 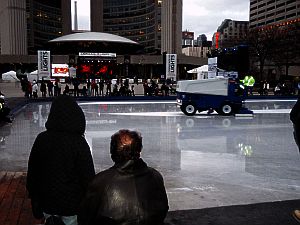 6.45pm: - Zamboni is going round the rink. People sit on the side of the rink waiting and watching.

2pm: at least 60 skaters with at least another 30 skaters on the benches hopping on and off the ice, one rink guard. Some of the little kids have helmets.

5 pm: 60 skaters at least, plus more hanging around, the zamboni is cleaning the ice. Some helmets, 1 staff keeps control.

1.30pm - zamboni on the ice 2 rink guards both in helmets and another city guy, no helmet, helping to shovel.

Numbers samples, 9:15am:''' 2 pleasure skaters (no helmets, both were adults)